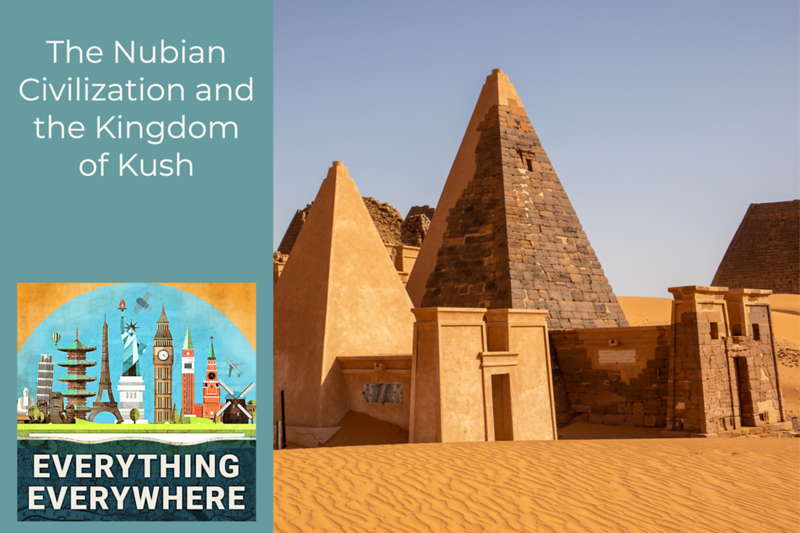 Most people are familiar with the ancient Egyptian civilization, which arose along the banks of the Nile River.

However, the Egyptians were not the only major civilization that existed on the Nile.

Just south of Egypt was a culture that was very similar yet very different, who was Egypt’s sometimes enemies, sometimes trade partners,  sometime overlords, and sometimes subjects.

Learn more about the Nubian Civilization and the Kingdom of Kush on this episode of Everything Everywhere Daily.

If you think of the Nile River, pyramids, and hieroglyphics, your mind will almost certainly turn to ancient Egypt.

To be sure, Egypt had all of those things, but they weren’t the only civilization that shared those cultural traits.

Ancient Egypt extended down to about the modern Egyptian-Sudanese border. This was the limit of what was known as Upper Egypt, and just to be clear, when I refer to upper and lower with reference to the Nile, upper refers to upstream, with is actually to the south because the Nile flows north.

But why did Egypt stop there? The Nile keeps going, and you would think that given the constraints of the desert, it would be natural for the Egyptians to keep extending their influence to the south.

The reason has to do with the natural barriers which are in the Nile River. If you remember, back to my episode on the Nile, there are a series of rapids and areas on the river where it becomes very shallow These are called the Nile cataracts.

That doesn’t mean that the river below the cataracts was inhospitable. In fact, life along the upper Nile was not that much different than in the lower Nile.

So it shouldn’t be surprising that a very similar civilization arose further upriver from Egypt. These people were the Nubians.

Egypt and Nubia were, in some ways mirror images of each other.

If you saw an image of an Egyptian Pharoah, he would be dressed in a very similar fashion to a Nubian ruler.

That being said, while Egypt is better known to the rest of the world, primarily due to its location on the Meditterrian and interaction with other ancient civilizations, Nubia was not just a copy of Egypt.

Nubia was its own civilization. If anything, Egypt and Nubia could be called Nile civilizations. This isn’t that different than many modern countries which are next to each other and are very similar. Austria and Germany. Sweden and Norway. Serbia and Croatia. Peru and Bolivia.

So who were the Nubians?

The biggest superficial difference that most modern people would notice is that Nubians were sub-Saharan Africans. They were black.

They looked very similar to the people who currently reside in Sudan and Ethiopia today.

The origin of Nubia goes back very far. In fact, the Nubians can be considered one of the oldest civilizations in the world.

I previously did an episode on how the Sahara desert was once actually a grassland. In fact, this was the case relatively recently in geologic history. The Sahara started to turn into a desert about 8,000 years ago, which was about the time that the Nubian civilization arose.

What probably happened was that nomadic hunters who roamed the grassland of North Africa had to find a place to settle down when their grassland turned to desert. The place they landed was the very fertile, if narrow, banks of the Nile River.

This story holds true for both Egypt and Nubia.

In fact, before the rise of dynastic Egypt, it is very difficult to say where Egypt ends, and Nubia begins.

We know that when these nomadic people began to settle down, they began building megalithic structures.

One of the oldest can be found in the Nubian Desert in what is known as the Nabta Playa. The Nabta Playa is located just north of the Egypt-Sudan border, about 60 kilometers west of the closest point of the Nile.

There is a stone circle there, which is believed to have been used for astronomical observations and is 2,000 years older than Stonehenge.

Archeological data from human remains in what was Upper Egypt shows that the people who lived there at this time were most definitely related to people from East Africa.

Around 3,500 BC, the people along the Nile began to solidify into political units.

Egypt developed into two kingdoms that we call Upper and Lower Egypt.

In upper Nubia, the Kerma kingdom arose. Kerma is named after the city for which the kingdom is named.

The ruins of Kerma are located along the Nile River, about 250 kilometers south of the Egyptian-Sudanese border and about 500 miles north of Khartoum, the capital of Sudan.

Kerma was probably the largest city along the Nile south of the cataracts at the time.

Kerma is an extremely important archeological site from the ancient world that most people are totally unaware of.

Kerma was a very large city for the era, with a population of over 10,000 people. There is evidence of complex temple buildings as well as tombs. There are estimated to be over 30,000 graves with evidence of social stratification.

While Kerma and Upper Egypt had developed into distinct societies by this point, there is clear evidence of trade and cultural contact between the two cultures.

Some Egyptian gods, such as Horus, were venerated in Nubia, and Egyptian artifacts were found in Nubian tombs.

Despite the obvious cross-cultural exchanges, unique Nubian traditions had developed. The Nubians had a very distinct form of pottery which they developed. Their funerary rituals were different of the Egyptians.

Nubia first appeared in discovered Egyptian writing around 2300 BC.

For the most part, initially, things between Egypt and Nubia were peaceful. Given that they were both surrounded by desert with the river as their lifeline, they were natural trade partners.

Nubians had goods they received from farther upriver from what is today Ethiopia and Uganda, that they would trade with Egypt.

There was a great deal of mixing between Nubians and Egyptians. Nubians served in the Egyptian army, as is evidenced by statues of Nubian archers found in a 20th-century BC Egyptian tomb.

Several Egyptian pharaohs had Nubian ancestry. Mentuhotep II of the 11th Dynasty, Amenemhet I, the founder of the 12th Dynasty, and Sequenre Tao of the 17th Dynasty were all descended from Nubians. Many of their descendants would have as well.

By the time they became pharaohs, they would have had families that had lived in Egypt for decades and would have been culturally Egyptian.

Things were not always peaceful between Egypt and Nubia.

After the New Kingdom Period and the rise of the 17th Dynasty around 1580 BC, Egypt became expansionistic. They not only expanded into the Levant up the coast around the Mediterranean, but they also went south and conquered Lower and Upper Nubia, including the Kingdom of Kerma.

Nubia became part of the Egyptian Empire for close to 500 years.

Between the years 1098  to 1088 BC a quasi-civil war erupted between the high priest of Thebes and the Viceroy of Kush, Kush now being the name of the Egyptian province located in Kerma.  The name of the viceroy was Panehesy, who was Nubian.

Panehesy occupied Thebes until he was pushed back to Nubia by the Pharoah. There he broke away from Egypt, controlling all of upper Nubia and much of lower Nubia.

One thing the Egyptians were good at was administering a large empire. Many Nubians were involved in the administration of Egypt and took this knowledge to form the new Kingdom Kush once they had become free of Egypt.

After several centuries of occupation, the cultural lines between Egypt and Nubia had again become very blurred.

Kush became a blend of Egyptian and Nubian customs. The primary god in Kush became the Egyptian god Amun.

By the 8th century BC, Kush had developed a strong centralized royal system based on the Egyptian model.  The Kushite King Kashta peacefully took over Upper Egypt.

This led to his son Piye, invading lower Egypt and establishing the 25th Dynasty, which is also known as Nubian Dynasty or the Kushite Empire. The dates usually given for the 25th Dynasty are 744 BC to 656 BC.

Even though they took over all of Egypt, the Nubian Dynasty had their capital in Napata, which was located at the fourth cataract of the Nile.

After the Kushites lost control of Egypt, they still existed as a kingdom in some form or another until the 4th century.

If you have ever seen photos of pyramids in Sudan, these were built during the Kingdom of Kush. The Kushites revived pyramid building that had been abandoned in Egypt for over a thousand years.

The capital of Kush was the city of Meroë. Meroë is one of the largest archeological sites in the world, and it is home to a large collection of temples and over 200 pyramids in various states.

The Kushite pyramids were much smaller and much steeper than Egyptian pyramids, which allowed for many more of them to be built.

The end of the 25th dynasty and the Kushite Empire changed the relationship between Nubia and Egypt.

Egypt was now controlled by foreign powers. When Alexander the Great conquered Egypt and his general Ptolemy established a new Macedonian dynasty, he never went below Aswan and the first cataract.

When the Romans took over, there was a conflict between Rome and Kush in the late 1st century BC which involved an army from Kush marching to the town of Qasr Ibrim near the border.  In response, a Roman army of 10,000 led by the governor of Egypt, Gaius Petronius, marched to the capital of Napata, destroyed it, and then marched back.

After that, there were no problems between Kush and Rome.

The region then followed a similar path to Egypt, with the spread of Christianity in the 5th and 6th centuries and then the spread of Islam and the Arabic language.

There are still Nubians today. They are a cultural and linguistic group that can be found in Egypt and Sudan. When the boundary of Egypt and Sudan was drawn by the British, it cut right through the Nubian heartland.

The construction of the Aswan High Dam and Lake Nassar destroyed much of the traditional area where Nubian people lived.

The Nubian language is threatened by the prominence of Arabic in both Sudan and Egypt.

On an interesting side note, during the 1973 Arab-Israeli War, Egypt used Nubian radio operators as code talkers, ripping a page from the Navajo Code Talkers of World War II.

Nubia has a very rich history, and Nubia is one of the oldest civilizations in the world. It is often overlooked because of the role Egypt played in other major civilizations such as Rome, Greece, Persia, Assyria, and even the ancient Israelites.

The Nubian ruins of Meroë are some of the greatest ancient ruins in the world, and should be considered on a par with Angkor Wat or Petra, but no one knows about it because so few people visit Sudan.

Nonetheless, the Nubian civilization and the Kingdom of Kush should go down alongside ancient Egypt as one not only one of the greatest civilizations in Africa but in the entire world.