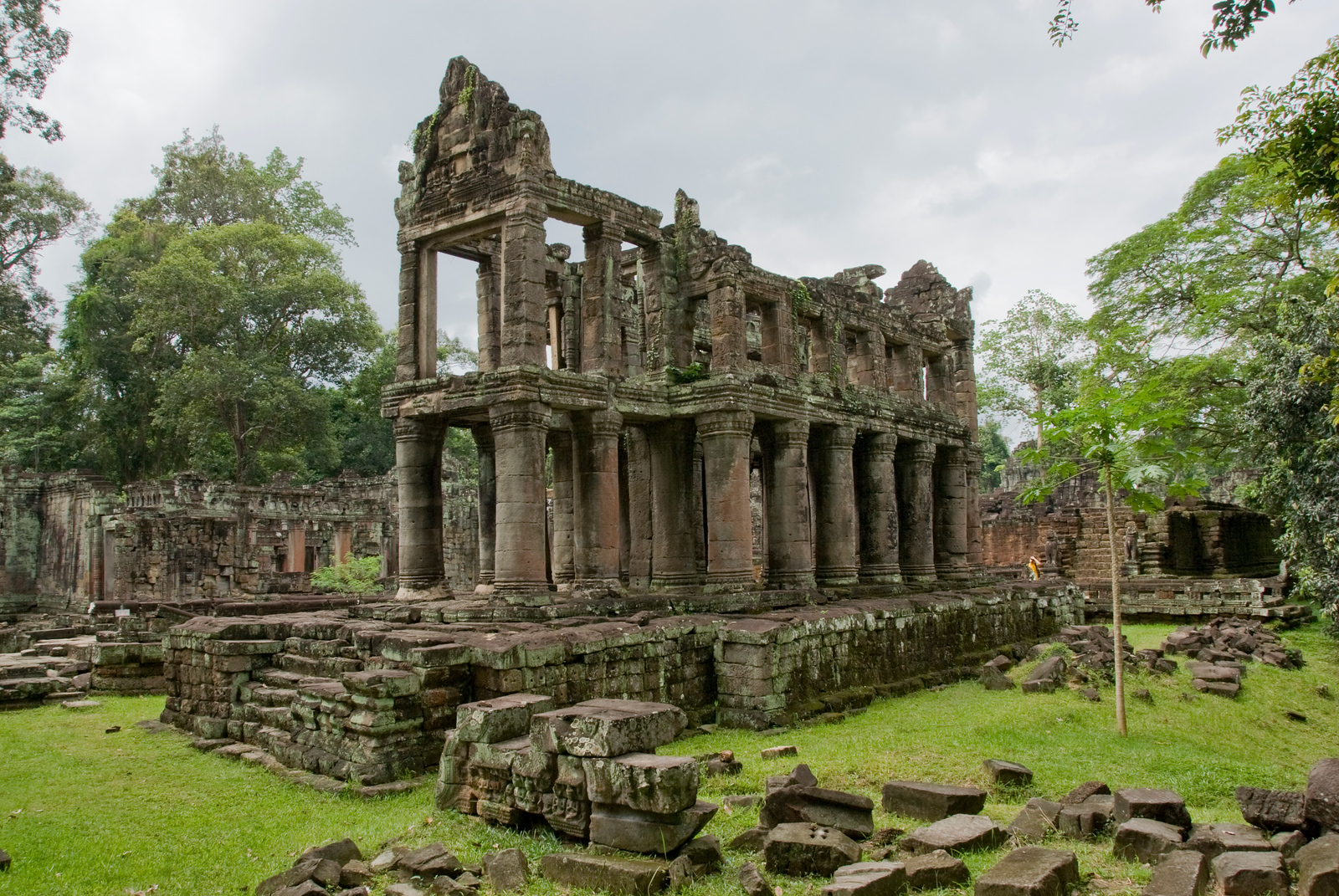 From the World Heritage inscription for Angkor:

Angkor, in Cambodia’s northern province of Siem Reap, is one of the most important archaeological sites in Southeast Asia. It extends over approximately 400 square kilometers and consists of scores of temples, hydraulic structures (basins, dikes, reservoirs, canals) as well as communication routes. For several centuries Angkor was the center of the Khmer Kingdom. With impressive monuments, several different ancient urban plans, and large water reservoirs, the site is a unique concentration of features testifying to an exceptional civilization. Temples such as Angkor Wat, the Bayon, Preah Khan, and Ta Prohm, exemplars of Khmer architecture, are closely linked to their geographical context as well as being imbued with symbolic significance. The architecture and layout of the successive capitals bear witness to a high level of social order and ranking within the Khmer Empire. Angkor is, therefore, a major site exemplifying cultural, religious and symbolic values, as well as containing high architectural, archaeological and artistic significance.

The park is inhabited, and many villages, some of whom the ancestors are dating back to the Angkor period are scattered throughout the park. The population practices agriculture and more specifically rice cultivation.

I could spend a month here and fill every day taking photos. There were hundreds of photos I could have taken if I was only at a place at a different time of day.

Most people only think of Angkor Wat and assume that the temple is all there is to see. The entire complex is enormous and encompasses many square kilometers, not including the many smaller temples on the outskirts of Siem Reap. People still live on the grounds of Angkor and make a living selling things to tourists (often annoyingly so).

I spent about four days exploring and I could go back today and see things I didn’t see my first time around.

Angkor is located within the province of Siem Reap in the midst of the deep jungles of Cambodia. This city is most famous for Angkor Wat, which is a temple complex with the name that literally translates to “The City of Temples”. The Angkor Wat temples are the largest religious monuments in the world. For this reason, it was recognized as an important cultural site by UNESCO in 1992.

The Angkor Wat temple complex spans a total land area of more than 162 hectares. When it was first built, it was constructed as a Hindu temple for god Vishnu during the reign of the Khmer Empire. By the end of the 12th century, it transformed into a Buddhist temple. The construction of the temple began in the early 12th century in present-day Angkor, which served as the capital of the Khmer Empire. It was commissioned for by King Suryavarman II to be the state temple and his eventual mausoleum.

The temple has been recognized as the best example of Khmer architectural style. It is also one of the most visited tourist attractions in Cambodia, which has eventually become an important symbol for the country. In fact, the Angkor Wat appears on the country’s official flag.

About the Angkor Wat Temples

The Angkor Wat temples are just one of a hundred temples and structures that have survived from the earlier centuries of the Khmer Empire rule in Cambodia. However, it is most revered because it depicts an important clue on how the prehistoric people lived in the region. If you examine the bas-relief galleries on the walls of the temples, the tales of the legend and history of Cambodia can be seen and discovered.

There are two basic plans of Khmer temple architecture that was utilized in the construction of the Angkor Wat temple – temple-mountain and galleried temple. The design concept of the temple was believed to mimic the home of the Hindu mythology devas: Mount Meru. There is also a quincunx of towers placed within the center of the temple. All of these elements work together to form one of the grandest examples of ancient architecture in Asia. Aside from its grandeur and harmony, the level of detail of the devatas and bas-reliefs that adorn its walls is something to be admired.

Tips for Traveling to Angkor Wat

If this is your first time to travel to Angkor and the temples of Angkor Wat, here are some practical information you need to know:

It was in the 1990s when Angkor Wat became a major tourist destination in Cambodia. As of 1993, there was an average of nearly 8,000 visitors to the site. Over the years, the growth of tourists visiting the site grew exponentially such that by 2004 the average rose up to half a million tourists!

As of 2013, there is an average of 2 million tourists who visit the Angkor Wat. The revenue from the tourism on the site has helped to produce funds that can later be used for the conservation efforts at the site. The influx of tourists at the site has caused no significant issues so far in terms of damage to the site. However, ropes and wooden steps have been added to some parts of the temple in order to prevent tourists from coming into contact with delicate areas of the structure and for the tourists’ safety.