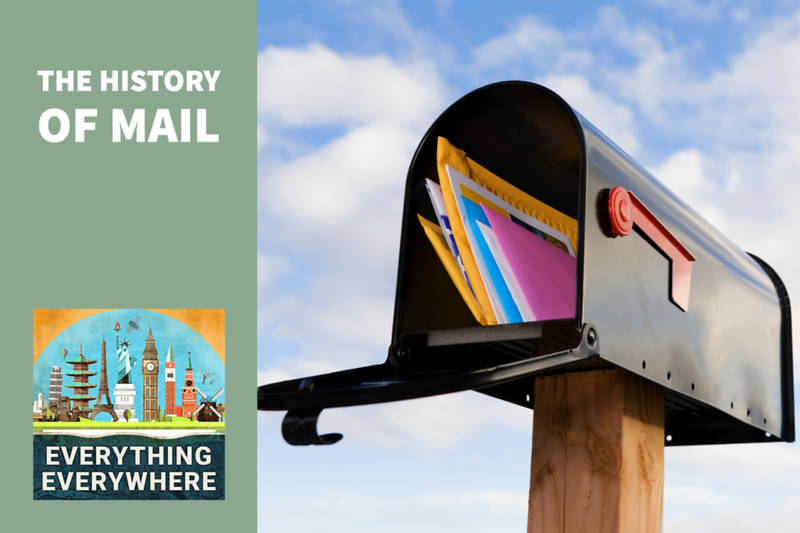 Since humans began to adopt writing systems, they also created systems for passing along written messages.

For thousands of years, it would have been possible to get messages to distant parts of whatever empire or kingdom you happened to live in, provided you found the right courier and had enough money.

Today, the entire globe is integrated into a connected postal system, allowing physical messages to be sent between almost any two people.

Learn more about postal deliveries and how our modern system has ancient roots on this episode of Everything Everywhere Daily.

In the big scope of humanity, the development of writing was hard. The delivery of messages was relatively easy.

Once we had figured out how to draw symbols that had some sort of meaning, the next step of delivering those written messages was rather trivial.

That is why courier systems for messages were something that developed independently in many different places around the world.

The first place that we know of that had an organized system for sending messages was ancient Egypt. This makes perfect sense as Egypt is very old, and they had a material in papyrus that could easily be written on and delivered long distances.

At least as early as 2400 BC, the Pharaohs had developed a system for delivering royal decrees throughout the Kingdom. It was easy to do as everyone was situated along a single river, and very few people were literate.

The oldest piece of mail known to exist is a piece of papyrus dating back to 255 BC.

The first real generalized postal system was developed in ancient Persia, possibly by Cyrus the Great, around the year 550 BC. Within the Persian empire, it was possible for any location to send and receive messages with any other location.

Moreover, Cyrus struck deals with neighboring kingdoms to allow for the delivery of messages to and from Persia.

The Persian system was a network that was known as Chapar Khaneh or courier houses. A rider would ride quickly from one courier house to the next and swap horses when he arrived so he could continue to the next one just as fast.

If this sounds suspiciously like the American Pony Express system, it was basically the same thing….except that it came 2,500 years earlier.

The Persian system probably evolved from a military intelligence network that was later repurposed for sending messages.

The Maurya Empire in India around 322 BC had a similar system of couriers. They had specialized chariots which would deliver messages. Here too, there was a great deal of overlap between intelligence gathering and mail delivery.

We do know that by the Han Dynasty, around 220 BC, they had developed a system of courier stations approximately every 10 miles. By the Ming dynasty in the 15th century, there were almost 2,000 posthouses across China, with even more spots in between to swap horses.

The ancient postal system we have the most information on is, not surprisingly, Rome.  Their system was known as the Cursus Publicus, or the public way.

It was actually based on the Persian system, where there would be posts along a road where couriers could either get a fresh horse or pass the message off to a new courier.

Augustus modified the system so a single courier could deliver the message from start to finish. This was developed so that the recipient of the message, aka the Emperor, could ask the messenger further questions, which wasn’t possible if the message was constantly handed off.

The Cursus Publicus also became the basis of the postal system in the Byzantine Empire, and it was one of the biggest losses when Western Empire collapsed.

What all of these systems from the ancient world had in common was that they had an organized system of changing horses or messengers. Also, with very few exceptions, the messages would have been only for governmental or military use.

An average person would have neither the ability to write, the expensive tools to write, nor did they have anyone to write to, as everyone they knew probably lived in their village.

Systems similar to these were used for hundreds of years by the Holy Roman Empire, the Islamic Caliphate, the Mongol Empire, and many other smaller nations.

All of these were a far cry from the postal systems we are familiar with today.

The first step towards a modern postal system took place in 1653 in France. Jean-Jacques Renouard de Villayer created a private postal system in the city of Paris. He created many of the elements of modern postal delivery that you might be familiar with.

He set up boxes around Paris where letters could be left and delivered. Any letter would be delivered if you used one of his pre-paid envelopes or attached a receipt to the letter showing that delivery had been paid.

He actually guaranteed same-day delivery within the city of Paris.

Despite being a truly groundbreaking and innovative service, it quickly went out of business as people began putting mice inside his boxes, and the public became hesitant to use them.

Throughout the age of Enlightenment, letter writing became more common amongst the elite, and here I’ll reference my previous episode on the Republic of Letters. However, the physical act of sending a letter was still very difficult.

It could take weeks or months for a letter to arrive, and you might never know if you actually ever made it.

This messy state of affairs continued into the 19th century. The country that developed the first truly modern postal system was Great Britain.

In the early 19th century, everyone in Britain knew that the postal system made no sense.  For starters, recipients still had to pay for a delivery before they even knew what the letter was about. Second, delivery fees were assessed by a very complicated system based on distance and the number of pages in the letter.

It wasn’t uncommon for someone to be hit for the equivalent of a full day’s wage just to open a letter that was sent to you.  For example, a three-page letter sent from London to Birmingham cost two shillings and threepence, which at the time was a lot of money.

Finally, there were massive loopholes in the system. Members of parliament had the ability to send mail free of charge. If you happened to know a member, they could mail it for you for free. There were 658 seats in parliament, yet in the 1830s, MPs managed to send 7 million pieces of mail annually.

Once you got the encoded message on the envelope, you could just refuse to pay for it.

The person who cut through all this mess was an Englishman by the name of Rowland Hill.

Hill ushered in several major changes to the Royal Mail, which are staples of postal systems around the world.

For starters, he changed it so that the sender would pay for postage, not the recipient.

Second, he removed all distance delivery charges throughout the entire United Kingdom. There would be one price regardless of where it was sent.

Third, he got rid of charging for the number of pieces of paper being sent and instead charged by weight.

The new cost of sending a letter anywhere in the UK was 1 penny for ½ ounce or 142 grams.

This was a radical step for the Royal Mail because it was a significant reduction in the price of sending a letter. Hill’s argument was that by making it more affordable for working-class people, the volume of mail would increase, offsetting the decrease in price.

His reforms were implemented in 1840. The very first year, the number of letters sent doubled. Within ten years, it doubled again.

One other thing he introduced was a system to show payment by the sender. He created a small adhesive piece of paper that could be placed on the envelope to prove payment had been made.

It was the first postage stamp.

The first stamp was known as the Penny Black, and it was an image of Queen Victoria in profile.

There were over 68,000,000 Penny Black stamps that were printed, and they aren’t that hard to find today. You can find originals on eBay for under $100.

Switzerland and Brazil adopted postage stamps just three years after they were introduced in Britain. By 1860 over 90 countries were using postage stamps.

In 1874, the Treaty of Bern was signed, which established the Universal Postal Union. Prior to the UPU, every country had to establish bilateral treaties with every other country for the delivery of international mail.

First, there would be a flat rate to mail a letter anywhere in the world

Second, foreign and domestic mail would be given equal treatment.

Finally, Each country would keep all money it collected for international postage.

The UPU became an agency under the United Nations in 1948.

As new methods of transportation were developed, such as railroads and steamships, one of the most important functions that they had was the faster delivery of mail.

Airmail was the first real commercial use case for airplanes.

As mail became more streamlined, it began to be used for purposes beyond just sending letters.

In 1872, an American by the name of Aaron Montgomery Ward printed a single sheet of paper with a list of items that could be purchased by mail. It was aimed at farmers who lived far away from cities with stores.

In 1892, Alvah Curtis Roebuck and Richard Warren Sears created the Sears, Roebuck, and Co. By 1894, they issued a catalog that was 322 pages, and the next year issued one that was 532 pages.

You could literally order almost anything, including an entire house.

As mail exploded in growth, systems had to keep up with volume.  Formalized systems of addresses and house numbers were developed.

Postal Codes were adopted in most countries in the second half of the 20th century.

In 1957, the Canadian Postal Service introduced an automated letter sorting machine that could sort 200,000 letters an hour.

The late 20th century was the peak point for global mail delivery. Electronic communications have replaced most regular mail, including letters, bills, and magazines. The one area which has increased dramatically is the delivery of parcels due to online shopping.

Sending written messages was the original system of long-distance communications. It quite literally had a major role to play in the development of science and technology.

In 2016, a group of American economists published a paper showing a strong correlation between places that had post offices nearby and places where patents were filed. Moreover, when new post offices were opened, patent applications increased.

The postal system might not be as important as it used to be, but that is only because we have something better, cheaper, and faster. Nonetheless, postal delivery played an enormous part in the spread of ideas and information, which helped to create the modern world.