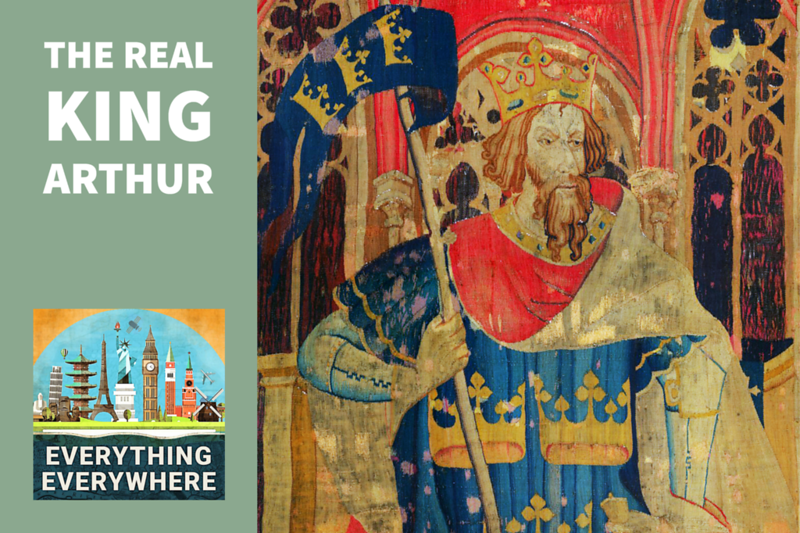 King Arthur is one of the most popular and widely known characters in literary history around the world.

Tales have been told about him for almost a 1,000 years.

Learn more about the historicity of King Arthur and if he really existed on this episode of Everything Everywhere Daily.

Before we dive into different theories about the historicity of King Arthur, we should probably cover what it is we known for certain.

There are several histories of Britain which mention an Arthur, however, the character of King Arthur that we know today really began with Geoffrey of Monmouth’s book published in 1136 titled Historia Regum Britanniae, or the History of the Kings of Britain.

The Historia Regum Britanniae was neither a work of fiction nor a work of history. It attempted to document the kings on the island of Britain for 2000 years. The more recent kings are well documented, but the very early kings have very little evidence to support their existence.

For example, it claims that exiles from the Greek city of Troy, in particular Aeneas, settled in Italy, and his grandson Brutus, was then exiled and settled in Britain.

This is pretty much complete nonsense, and it really just rips off some of the mythology of early Roman history to try and establish a link between Britain and Rome.

Moreover, we know from Roman sources that much of the story is just flat-out wrong.

He also had a short work which is sometimes included and was initially published separately known as the Prophetiae Merlini, or the Prophecies of Merlin.

Merlin was supposedly a wizard or an enchanter with supernatural powers. The name probably comes from a poet by the name of Myrddin Wyllt, or Merlin the Wild, who lived in what is today, North England and Southern Scotland.

Geoffrey’s description of Arthur has him defeating an army of Saxon invaders, which is important for placing a timeframe on the story.

Other elements of the Arthurian story which Geoffrey provides include his father being Uther Pendragon, his wife Queen Guinevere, his son Mordred, and his burial in a place called Avalon.

If you are familiar with the story of King Arthur, you’ll notice that there is a whole lot of the legend which is still missing at this point.

Here I need to point out that if there is any tint of truth to the Arthurian legend, this would have been a King who ruled sometime in the first or second century after the collapse of Roman rule.

Also, despite the adoption of King Arthur by the English, he was most emphatically himself, not English. This is simply due to the fact that England. and the English didn’t exist at this point.

England was named after the Angles, a Germanic people who, like the Saxons, invaded the island several centuries later.

If there was an Arthur, he would probably have been a Briton, which is not to be confused with the British. These people lived in what is today western England and Wales and were considered Romano-British. After several centuries of occupation by the Romans, Britain has very Romanized.

Even after the Roman collapse, the people there were still culturally very Roman.

The story of King Arthur spread across the English channel to France.

In the 12-century, the story of Arthur was picked up by the French writer Chrétien de Troyes.

De Troyes added elements to the Arthurian story. He added Lancelot, Percival, Camelot, the affair between Lancelot and Guenivere, and the quest for the holy grail.

Not only is there clearly no historical basis for these parts of the story, but de Troyes was also very clearly telling a story. He was a poet and a troubadour. He wrote several stories using this period of time as a backdrop, including Yvain, the Knight of the Lion, which is considered by some to be the world’s first novel.

In 1155, the Norman poet Robert Wace was the first to mention the knights of the Round Table.

For several centuries, the story of Arthur traveled around continental Europe. The Kinghts of the Round table allowed for the stories of knights surrounding Arthur to expand and be embellished.

The number of knights was anywhere between a dozen and 1600, with tales of seats at the actual table ranging from 100 to 300.

I should note that the name of Arthur’s sword was given by Geoffery of Monmouth as Caliburnus, which was just a bastardization of the Latin word for steel.

The name of the sword changed over time until de Troyes, writing in Old French, called it Escalibor, which eventually became Excalibur.

The French poet Robert de Boron was the first to mention the sword in the stone and how Arthur’s claim to kingship was based on his removing the sword.

The book that really put everything together and created the modern-day story of King Arthur that we all know was Le Morte D’Arthur or the Death of Arthur, written by Sir Thomas Malory in 1485.

Malory took the best bits from all of the stories and combined them into one comprehensive Arthurian tale.

Malory’s story was a hit and stayed in publication for close to 150 years until 1634.  After the English civil war, Arthur fell out of popularity until the 19th century and the rise of romanticism.

Pretty much every subsequent Arthurian story is based on the work of Thomas Malory.

So, with all of this, can we separate what is patently fiction is from what could possibly be fact?

Clearly, there were no women in lakes lobbing scimitars.

Likewise, the mythology surrounding Camelot, the knights of the round table, and the quest for the holy grail is also a later embellishment created once the story escaped to Europe, created by storytellers.

One bit of evidence is that the name Arthur is probably a Welsh name derived from the Roman family name Artorius.

This would at least pin down the word to have come from the Romano-British.

But did anyone actually use the name?

One person who sort of had the name was a 2nd and 3rd-century Roman military commander in Britain by the name of Lucius Artorius Castus.

Other than having the name “Artorius,” there really isn’t a whole lot about him that fits the profile. He didn’t live after the collapse of the Western Empire, and he most certainly wasn’t a king.

In the 20th century, this theory picked up a popular following. The problem is, outside of the fact that the name is similar and that Lucius Artorius Castus was a real person, there is almost nothing else that fits the story. Many of the connections people tried to make were all elements of the story which were created once the legend reached continental Europe.

If there isn’t anyone with the name that fits, how about someone that fits the deeds?

Geoffrey of Monmouth spoke of Arthur leading an army to a great victory over the Saxons. Did such a battle take place?

Yes. The Battle of Badon Hill occurred sometime in the late 5th or early 6th century when the Britons defeated the Saxons. This battle was mentioned in texts long before Geoffrey of Monmouth was alive.

Who could be associated with this battle? One candidate is a king by the name of Riothamus. Riothamus is listed by other sources as a king. Moreover, Geoffrey of Monmouth also claims that Arthur went to Gaul twice, once to help an emperor and once to quell a civil war.

Riothamus did both of those things. However, Riothamus was probably not present at the Battle of Badon Hill.

Another candidate is Ambrosius Aurelianus. On the plus side, he was most probably the leader of the Britons at the Battle of Badon Hill. Against him is the fact that he was never listed as a king until much, much later.

One final candidate is Artuir mac Áedán, or Arthur son of Aedan. Aedan was the king of a land known as Dál Riata, which existed in both parts of Scotland and western Ireland in the late 6th century.

In this case, the name and time sort of fit, but nothing else about the story does.

At best, Arthur could be considered an amalgamation of several different rulers, but again, that is being generous as there isn’t any evidence for that.

So, odds are there never was a King Arthur, and we know there hasn’t been one since the invasion of the Anglo-Saxons.

I do want to end on one final note. Arthur is often referred to as the once and future king, implying that he could one day return. To date, there has never been a king by the name of Arthur.

However, British monarchs can take whatever name they wish when they ascend to the throne. It is not at all uncommon to use one of their middle names as their regal name. For example, Queen Elizabeth’s father was Prince Albert before he became King George VI.

So, it is at least possible in theory that we could have a King Arthur sooner rather than later….but I highly doubt it.

The legend of King Arthur is one of the central stories in western literature. While the legend of the king, his queen, and his knights makes for a good story, it appears to have no real basis in fact.