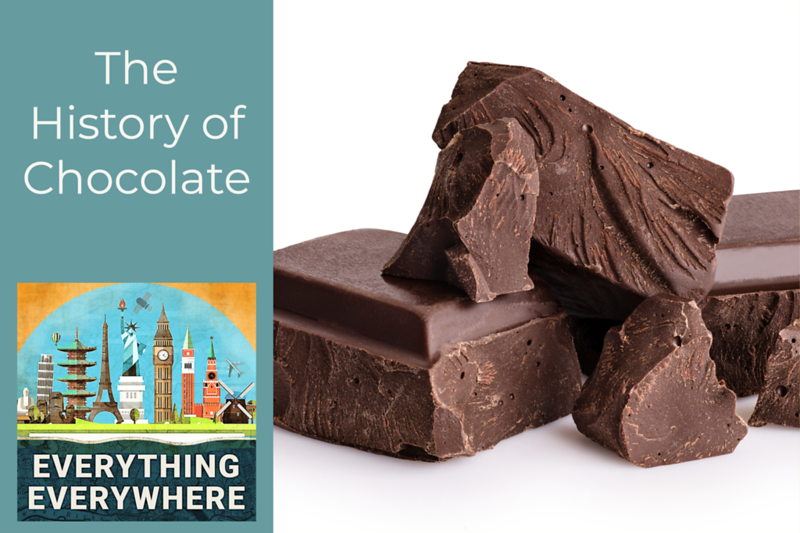 Around 3,500 years ago, the people of Central America discovered something marvelous: the cacao bean could be used to create a fermented beverage that was unlike anything they had experienced.

For centuries, the cacao bean became so important in that part of the world that it was used as money.

Eventually, the bean was taken from the Americas to Europe, where it was radically transformed.

Learn more about the history of chocolate and how the sweet treat we know today developed from something completely different on this episode of Everything Everywhere Daily.

The history of chocolate begins with the cacao plant.

The history and origin of the cacao plant have been very difficult to determine because once it was domesticated, it spread rapidly through South and Central America.

The current best guess that researchers have is that the cacao plant originally came from somewhere in the Amazon basin.

The scientific name for the plant is ??Theobroma cacao. It is a large oblong fruit, and inside there is a white, fleshy pulp.

It is believed that the first use of the cacao plant was its consumption as a fruit. Inside the fruit, as with pretty much all fruits, is a dark seed, which is often called a bean.

The plant was probably domesticated around 5,300 years ago somewhere in the Amazon. However, it spread quickly after that, which is one of the reasons why it has been so difficult to pin down the location of its origin.

The cacao plant has a rather narrow range of latitudes where it can live, about 20 degrees north or south of the equator.

One of the places where it thrived was in Central America.

The Mayans created a drink known as xocolatl, or rather we know it as xocolatl, but they probably called it something else. More on that in a bit.

…and as you can probably guess, xocolatl is the origin of the word chocolate.

The cacao plant was extremely important to the Mayans. It was widely cultivated, and it was used by people at every level of society.

The drink they developed was a fermented alcoholic beverage made from beans with chilies added to it for taste.  It was consumed at important events such as festivals, celebrations, and religious ceremonies.

The beans became so important that they were used as a form of currency, and everything from wives to tools was priced in cacao beans.

If you are imagining people sipping on a cup of hot chocolate, that is not what this drink would have tasted like. It was probably very bitter, which is why hot chilies were added to it.

When the Aztecs arose in Mexico, they too developed a love of xocolatl; in fact, it is from the Aztecs where we get the word. Xocolatl literally means bitter water.

Unlike the Mayans, xocolatl was only reserved for the elite in Aztec society. The cacao plant couldn’t be cultivated in most of the Aztec lands in central Mexico, so it couldn’t be as widely consumed as it was in Mayan civilization.

Like the Mayans, the Aztecs held the plant in high esteem and thought the cacao plant was a gift from the god Quetzalcoatl.

Cortez reported that the Aztec emperor Moctezuma II would drink nothing but xocolatl. His drink would often be flavored with another seed native to Mexico, vanilla.

It was through the Aztecs that the cacao bean, and we will just be talking about beans from here on out, came in contact with Europeans.

Before I get into what the Europeans did with the bean, I should explain some of the differences between cacao and cocoa. If you read up on the subject, you’ll find the terms cacao and cocoa used interchangeably.

However, there is a technical difference. The raw bean from the plant is usually referred to as cacao.  If the bean is roasted and the fat pressed out of the bean, the powder that remains is usually called cocoa.

Some people will call different levels of bean processing different things, so the division between cacao and cocoa can vary and is often just a matter of marketing.

The first European contact with the cacao plant occurred in 1502 during the fourth voyage of Columbus when he reached the Central American mainland. He brought the beans back to Spain, but nothing became of them because no one knew how to process them.

The expeditions of Hernan Cortez in Mexico realized exactly what those beans could do. He and his men, particularly the Jesuits, brought back not just beans but the recipe for xocolatl to Spain in 1544.

In Spain, it was used as a medicine, but it still had the bitter taste that it did back in the Americans. They added something to the beverage to remove this bitter taste to make it more palatable. They sweetened it.

This new sweetened chocolate, and it was still a drink at this point, was a hit at the Spanish royal court in the late 16th century.

The secret of chocolate was limited to Spain and Portugal for almost 100 years until the middle of the 17th century.

An Italian named Antonio Carletti learned about chocolate in Spain and brought it back with him to Italy. It quickly spread in Italy and then was exported to Austria and Germany.

As word of this new chocolate spread, demand for cacao beans to make it dramatically increased.

Europeans began to create their own chocolate recipes, using ingredients they were familiar with. They added sugar, honey, cinnamon, milk, cream, and dried fruit.

While there was a great demand for chocolate in Europe, it was tempered by its high cost. It was still a luxury good, and it was still just a drink.

The reason why it remained so expensive was the cost of processing it. For the most part, in the early 18th century, it still had to be done by hand.

The first mechanical cocoa grinder was developed in 1729 by the English inventor Walter Churchman. His water-powered grinder could both grind the beans and separate the bean from the husk and dramatically increased the amount of cocoa that could be processed.

In 1732, French chocolatiers discovered that heating grinders could improve the extraction of cocoa.

Dedicated companies began to spring up in the mid-18th century that was dedicated solely to the production of chocolate.

One of the biggest advanced in the mass production of cocoa was developed in 1815 by the Dutch chemist Coenraad van Houten. He developed a process by adding alkaline salts to the acidic cocoa power to create a more neutral-tasting, less bitter chocolate.

This process became known as the Dutch Process and is still used today.

In 1828 Van Houten created a press to extract the fat, known as cocoa butter, from the beans. This reduced the processing cost and made the end product more consistent.

All of these innovations led to the creation of the thing which really made chocolate come into its own.  The thing that you probably think of first when you think of chocolate.

In 1848, the British company J. S. Fry & Sons had a breakthrough when they mixed cocoa butter back into the cocoa powder, making it malleable. They created the first solid chocolate bar.

Milk had been added to chocolate drinks ever since it arrived in Europe. In 1875, the Swiss chocolate maker Daniel Peter took advantage of a new invention called powdered milk to make a new form of chocolate called milk chocolate.

He later joined with his friend, the Swiss businessman Henri Nestlé to mass-produce milk chocolate.

The late 19th and early 20th centuries saw the creation of many chocolate companies, which are still very popular today. These include Cadbury, Nestlé, Hershey, Lindt, Mars, Toblerone, Godiva, and Ghirardelli.

As demand for chocolate increased in the late 19th and early 20th centuries, the production of cacao shifted from the Americas to West Africa.  Today, three of the top four cacao-producing countries in the world are the Ivory Coast, Ghana, and Nigeria.

The creation of solid chocolate radically changed what you could do with chocolate. The chocolate bar was just the beginning.

Chocolate-coated or dipped products were made, usually fruits or nuts.

In 1900, the Hershey company created a small piece of chocolate called a kiss which could be sold for a much cheaper price than a whole chocolate bar.

In the 1920s, chocolate in the shape of a bunny became popular during Easter. In 1963, the first chocolate eggs were sold, which were later sold by the Cadbury corporation.

This allowed chocolate to become a medium for sculpting. If you have watched any TV food programs, there is a good chance you might have seen some of these competitions.  Extremely elaborate, edible, and sometimes fragile sculptures made out of chocolate. If you ever watch a period television show or a movie that shows some king with a chocolate sculpture, it is not historically accurate.

Chocolate is now big business. The total global market for chocolate was $125 billion dollars in 2020 and is estimated to reach $177 billion by the year 2027.

The world’s largest chocolate-consuming country is Switzerland which consumes 19.4 pounds or 8.8 kilograms of chocolate per person per year.

It is hard to imagine a world without chocolate. Despite its very ancient roots with the people of Central and South America, what we consider chocolate a solid food you can eat is actually a rather recent invention.

The relationship many people have with chocolate can best be summarized by the late cartoonist Charles Schultz, who said, :All you need is love. But a little chocolate now and then doesn’t hurt.”

Today’s review comes from listener Turng005 over at Apple Podcasts in the United States. They write:

This is the reason I still listen to podcasts. I love the fact-filled and relatively short episodes. Everything is wrapped up in a little under ten minutes. I’m well on my way to the completion of all 800 episodes. Antikythera mechanism is my suggestion for an episode topic. TYVM

The good news is that I already did an episode on it back in January. Just go to the show website or scroll down in your podcast app and you can listen to it right now.