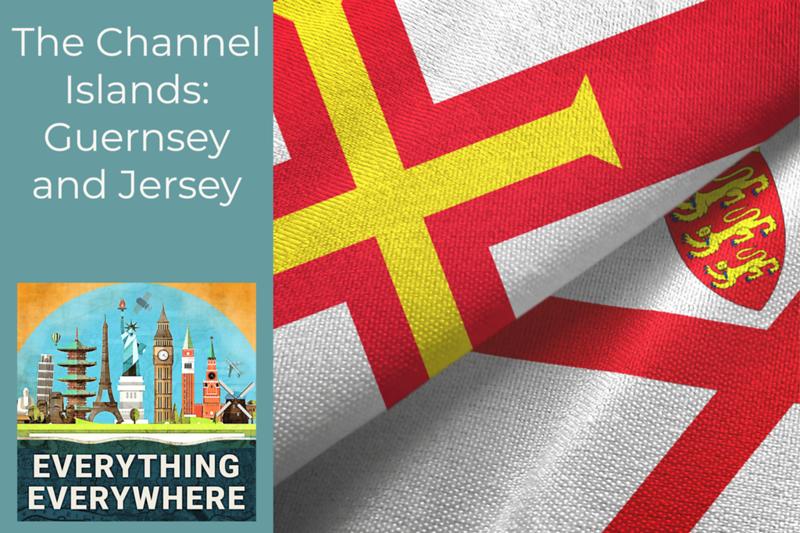 Located between England and France are several islands which have a unique status in the international community.

They aren’t part of any country, nor are they a territory of a country.

They share the same monarch as the UK but are not part of the Commonwealth.

I previously did an episode on what seems like a really simple question but is actually quite tricky: what is a country?

If you look at a map of the world, you’ll see most of the land divided up into different sections with lines around them that are colored differently.  These well-defined countries do, in fact, cover most of the Earth, and these cases are pretty cut and dry.

That bit is Mongolia, this bit is Namibia, and that tiny bit is Luxembourg.

While these countries do account for most of the world, they don’t quite account for everything. There are places that are edge cases. They aren’t full-fledged countries with a seat in the United Nations, nor are they territories of a country like Gibraltar, Guam, or Greenland.

Such is the case with the Channel Islands.

The Channel Islands are a collection of small islands located in the English Channel. They sit just north of Normandy, and they are far closer to the French coast than they are to England.

If you looked at a map and didn’t know any better, you’d assume that they were part of France, but they are not.

The Channel Islands consist of two separate jurisdictions: The bailiwick of Jersey and the Bailiwick of Guernsey.

If you’ve heard of the state of New Jersey and ever wondered where “Old Jersey” was, it is off the coast of France. The name New Jersey came from a Bailiff of Jersey who was given a grant of land by King Charles II.

Likewise, you might have heard of a breed of cow called a Guernsey. It came from the island that bears its name.

Jersey is the southernmost of the two bailiwicks, and Jersey is the only populated island with a population of about 106,000.

Politically, the Channel Islands are considered to be Crown Dependencies. The only other crown dependency is the Isle of Man, which will be the subject of another episode.

They are also not sovereign countries. As such, they are not members of the European Union or the Commonwealth of Nations, which consists mostly of former British colonies.

The sovereign of both Jersey and Guernsey is the British Monarch, who at the time of recording is Charles III.

However, they are recognized as Crown in Jersey or the Crown in Guernsey, not as the Crown of the United Kingdom.

That sounds suspiciously similar to how the King is the King of Canada or Australia, separately from being the King of the United Kingdom.  This would seem to make the Channel Islands more similar to independent countries.

However, Jersey and Guernsey each use the pound as their currency, or at least they issue their own pound notes separate from the Banks of England or Scotland.

They also have passports that say “British Passports” on the front and are treated as UK passports for the purpose of travel.

Jersey and Guernsey are represented by the United Kingdom diplomatically, and the UK is also responsible for their defense.

All these things make them sound like a British Territory.

So, how did this odd political situation come about? How did these islands become a creature which, internationally, are considered neither fish nor fowl?

Given their location right off the coast of Normandy, it should come as no surprise that they were once part of the Dutchy of Normandy.

In 1066, the Duke of Normandy, a guy that you might have heard of by the name of William the Conquerer, invaded and conquered England.

The new King of England held the channel islands as part of his lands along with England and Normandy.

For about 150 years, Normandy was held by the kings of England. However, having land on the other side of the English Channel was never really a long-term tenable position.

The French were never keen about the English holding on to territory in mainland France. The French King Philip II set about taking back Normandy from the English.

Over a 10-year period from 1204–1214, the French and English fought for control of Normandy. A war that the French eventually won.

The English King John lost Normandy but managed to retain control over the Channel Islands.

His successor Henry II formally ceded his claim to Normandy, but the Channel Island remained part of Henry’s claim, although, like Normandy, it was never part of England.

The Crown eventually appointed a bailiff for both Jersey and Guernsey. The term bailiff had different meanings in the Middle Ages. In the case of the Channel Islands, a bailiff was basically the top civil servant on each island.

As they were regions governed by a bailiff, they were known as bailiwicks, which is the term they are still known as today.

Here I need to stress that Jersey and Guernsey are totally independent entities. While they are often lumped together in the Channel Islands, which I’m doing in this episode, they legally are totally different.

They don’t share any laws, any infrastructure, or any institutions. The only thing they share is a television station.

The Channel Islands weren’t really a major player in the history of either France or England. They were just there and, for the most part, didn’t really play a role in the affairs of either country. Their primary business was fishing and farming, and that was about it.

They did, however, suffer from constant piracy and changes in trade policy between England and France.

There were mostly affected by the historical trends which swirled about them.

When Henry VIII adopted Protestantism, both Jersey and Guernsey did as well. However, because they were protestant and not part of France, they attracted many Calvinist protestants from France.

During the French Revolution, the islands once again saw an influx of refugees, this time, it was mostly aristocrats who were fleeing madame guillotine.

The biggest thing which happened to the Channel Islands occurred during the Second World War.

When the Germans invaded France, the British expeditionary forces were routed and almost extinguished but for the miraculous evacuation from Dunkirk.

The people in the Channel Islands couldn’t have known that right after France was invaded, the British government decided that the islands weren’t of strategic importance and that they weren’t going to expend men and ships to defend them.

When Charles de Gaulle fled France, he did so by flying to the island of Jersey on June 17, 1940.

On June 20th, all of the remaining British troops on the island were evacuated.

Guernsey did manage to evacuate 80% of the children from the island and another 12,000 adults.

Jersey only managed to evacuate about 12% of its population.

The Germans entered the islands on June 30th. They didn’t know that all the military personnel had been removed from the island ten days earlier as the information had been suppressed.

Because the British didn’t make the information public, the Germans went ahead assuming that the islands were fortified and 44 civilians were killed in the invasion.

The Germans quickly set up defensive fortifications on the islands and incorporated them into Vichy France.

They were rather lenient at first, allowing the existing institutions to function, with the obvious caveat that they could veto anything or issue their own orders.

They changed the time zone as well as made everyone drive on the right.

Over the course of the war, life became harder and harder on the island. Supplies dwindled, and most islanders lost their jobs. While there was interest in a resistance movement, little was done, as repercussions on the population would outweigh any strategic benefit.

The Germans brought in Soviet forced labor to build fortifications on the islands as part of the German Atlantic Wall.

While the British didn’t see any strategic value to the islands, Hitler saw a great deal of symbolic value, as they were the only part of the British Islands which were occupied by the Nazis during the war. For this reason, the island was some of the heavily fortified sections of the Atlantic Wall.

When the invasion of Normandy occurred in June of 1944, the people on the islands assumed liberation was just around the corner as the allies were now only a few miles away in France.

However, an invasion of the Channel Islands never happened. The Allies kept moving forward on the continent and completely ignored the islands.

The winter of 1944-1945 was the worst of the war, and famine would have broken out, for both the civilians and the German occupiers, had it not been for Red Cross ships that brought supplies.

The German occupation ended on May 9th, one day after VE Day, when the German High Command surrendered. Some of the smaller islands took another week for the Germans to surrender.

Today both Jersey and Guernsey have economies that rely heavily on tourism and off-shore banking. They are popular banking destinations for Europeans because they use the pound, they are not subject to British laws, yet still have a tightly regulated banking industry, unlike off-shore havens.

There has been some talk in Jersey of declaring independence, but it isn’t something that would probably be done anytime soon unless there was to be some major incident. There isn’t actually anything stopping them from doing it as they aren’t actually part of the UK, but it might make relations with them more difficult, and they might have to increase expenditures.

Both Jersey and Guernsey have taken a more active role in their international relations in recent years, and they now both have an unofficial consulate in France.

One ambitious idea which has been floated is to connect Jersey to the French mainland via tunnel and then potentially connect Jersey and Guernsey with a tunnel.

If both tunnels were built, it would be on par with the length of the Channel Tunnel, which cost £21.8 billion inflation-adjusted pounds.

Currently, the most common way to visit Jersey and Guernsey is via ferry. There are ports in England in Poole and Portsmouth and in France in Cherbourg and Saint-Malo.

I took the ferry from Portsmouth back in 2014, and it was the worst boat experience of my life. We had extremely rough seas, and about half of the passengers were vomiting on the way over. I felt sorry for the crew who had to clean the ship.

You can also fly there as well. It is a one-hour flight from London.

That being said, both Jersey and Guernsey are like visiting a small town in England, but with their own unique quirks. Their issue their own pound notes, which are always fun to try and spend if you go back to the UK. It is also a very interesting way to travel between England and France if you are so inclined.

Jersey and Guernsey and two of the oddest places on Earth, at least from a legal standpoint. They aren’t countries, and they are territories of another country. They are culturally English yet geographically much closer to France.

If you are interested in small countries and odd places, then you should consider visiting Jersey and Guernsey because they are destinations that would be well within…. your bailiwick.