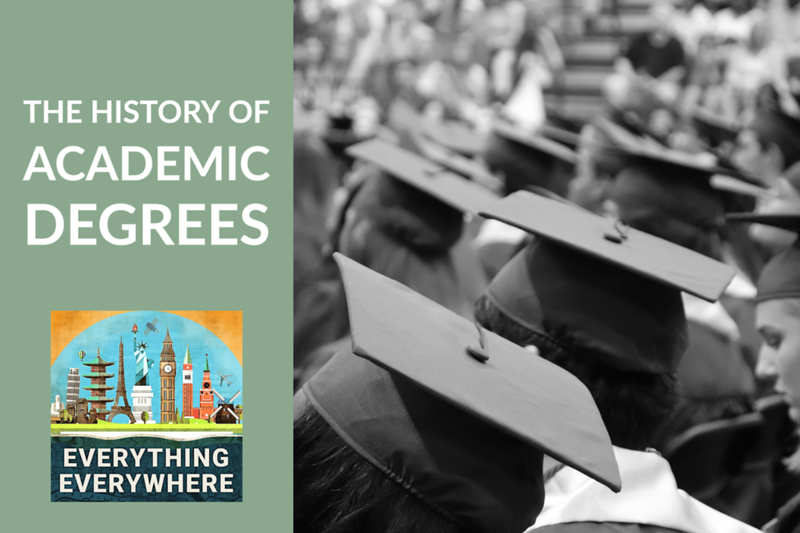 Every year around June, millions of people will wear robes and put on funny flat hats to receive their university degrees. But why do they all wear robes, and what’s the deal with that flat hat, and why does the hat have a frilly thing hanging off of it?

And why do we give out degrees named after unmarried men? And why are some people called a doctor if they don’t have any patients?

Learn more about the history of academic degrees and all of the traditions associated with graduating, on this episode of Everything Everywhere Daily.

The discussion of the history of academic degrees and graduation traditions all have origins that began back in the middle ages with the creation of the first universities.

Universities began in a way that was reminiscent of medieval guilds. Early universities can be thought of as a guild of scholars and teachers. In fact, that is where the word university comes from. The Latin phrase universitas magistrorum et scholarium means a “community of teachers and scholars”.

The first universities as we know them today started in Europe and they were run by monks.

The first place we can call a true university was the University of Bologna in Italy which was founded in 1088.

There was certainly education before this. Ancient Greece had academies and tutors who would teach the children of the wealthy for centuries. Prior to the rise of universities, there would be cathedral and monastic schools, but their education was basic.

The rise of urbanization and the demand for a more professional clergy required something beyond mere literacy.

Bologna was the first institute to use the university name, grant degrees, offer secular degrees as well as religious ones, and was independent of the church or secular power. It was run like a guild, except instead of masons or blacksmiths, their profession was knowledge.

The degree system we have today loosely mirrors the levels of a guild. They had levels such as apprentice, journeyman, master, and grandmaster.

A master’s degree was originally just a license to teach. The term comes from the Latin word for teacher: magister.  Being a master in a field of study was similar to becoming a master in a guild.

At first, earning the rank of master only accorded you the ability to teach at the institute where you earned your degree. However, in 1233, Pope Gregory IX issued a papal bull allowing those who reached the rank of Master at the University of Toulouse to be allowed to teach at any university.

This began the tradition of degrees from one university being recognized by other universities.

The doctorate degree was originally considered at the same rank as that of a master.

The word doctor comes from the Latin word for to teach: doceo.

The first people who had the word doctor associated with them were early church teachers. The original doctors of the Catholic Church were Saint Gregory, Saint Ambrose, Saint Augustine, and Saint Jerome.

The first doctorate degrees were awarded by the Church, not by universities. They issued what was known as a licentia docendi, which literally meant a license to teach, in this case referring to theology and religious matters. Earning a doctorate required nothing more than taking a test, paying a fee, and taking a loyalty oath.

As universities became more numerous and grew in prestige, the monopoly the Church had in issuing doctorates became a bone of contention.

In 1213, Pope Innocent III granted the University of Paris the right to issue doctorates, and it eventually became widespread.

The University of Paris only a few years later in 1231 issued the first Bachelors’s degree.

The term comes from the medieval Latin word baccalaureus. It wasn’t a word that ancient Romans would have used.

The term is borrowed from a Knight Bachelor. A Knight Bachelor is the lowest order of knights. They were usually too young or too poor to have vassals or land, and they weren’t inducted into a chivalric order.

The word may have derived from the classical Latin word baculum, which meant a stick, which reflected the wooden swords they would train with.

At this time, the term bachelor was also used by guilds and was an equivalent of a yeoman or a journeyman.

It wasn’t until the 19th century that the term bachelor began to be used to refer to unmarried men.

The early universities restricted themselves to the seven liberal arts, which were broken up into two parts: the trivium and the quadrivium.

The first bachelor’s degrees were issues for the study of the trivium, which were considered the basis of the Liberal Arts: Grammar, Rhetoric, and Logic.

A master’s degree was awarded for the study of the quadrivium which consisted of Arithmetic, Geometry, Music, and Astronomy.

So, at this point in the 13th century, bachelor’s and master’s degrees were for the study of the secular liberal arts, and a doctorate reflected the ability to teach theology.

The rank of master and doctor were considered equivalent at this time as they both reflected the right and ability to teach.

The use of the term doctor to refer to all physicians is also relatively modern. It began to be applied to medical practitioners in the 18th century, regardless if they held a doctorate or not.

This academic system was in use until the 19th century. Most professors in universities didn’t have a doctorate. It was usually reserved for doctors of divinity, law, or medicine. A doctorate didn’t require a thesis or any original research. It was simply awarded for advanced scholarship.

As science and knowledge advanced, universities went beyond the original emphasis on the liberal arts.

In the 17th century, Germany created the Doctor of Philosophy degree. In the 19th century, this morphed into the degree we know today. At first, it was just an equivalent to a Masters of Arts, but soon they demanded original research and a dissertation.

The demand for original research drove the popularity of the Ph.D. Students from the United States began going to Germany after completing their bachelors degree, and soon American universities began to follow suit.

The first Ph.D. in the United States was awarded by Yale in 1861.

As the PhD spread throughout the world in the 19th and early 20th century, it became to be seen as more advanced than the masters degree due to the research requirement.

And that is how the current three-tier system of degrees was developed.

The associates degree is a recent development which was first created in the UK in the late 19th century and gained in popularity in the later 20th century. Today it is considered to be between a high school diploma and a bachelors degree.

Graduation gowns were originally developed at medieval universities as a type of dress code. It was both a way to provide uniformity among the university and a way to separate themselves from the rest of the community they lived in.

People who earn their doctorate are usually encouraged to buy special doctoral robes. These will be more elaborate and have colors that represent their field of study. They can often cost up to $1000.

Today, the tradition of robes is usually only used for graduation ceremonies. Most graduates just rent a robe and use it for a day. In the United States, this developed after the Civil War when the trend was towards more informal attire.

The mortarboard, or the square hat graduates wear, is believed to have been derived from the Italian biretta, which was a square-shaped clerical hat.

This was originally reserved for people with master’s degrees, but it eventually spread to all form of graduates. In other countries, they wear a less rigid form of headwear, but still still a large flat top.

The tassels attached to the hat were originally used to reflect various degrees. Today they might be colored to reflect an area of study and they might have adornments for various honor societies.

One modern tradition is to wear the tassel on your right side before the diploma is issued, and then move it to the left side once it has been received.

There is an entire academic dress code in the United States which was created by the American Council on Education which goes into far more detail about everything, including how the sleeves should be cut. I’ll leave this for a homework assignment.

As with so many things in the modern world, much of what we take for granted are actually ancient traditions which have been passed on to us for centuries. Academic degrees and graduation regalia are just a few of those traditions which are still with us today.