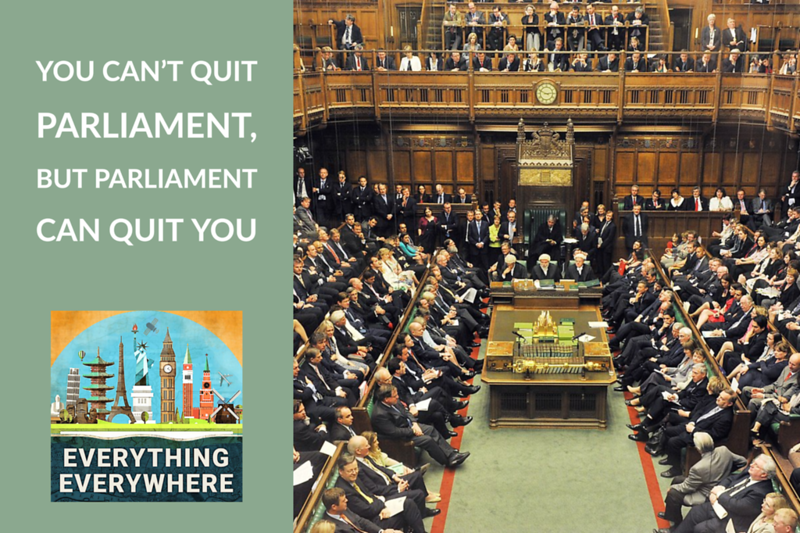 The British House of Commons has been called the Best Club in Town due to the fact that there is a 1,000-gallon vat of Scotch whiskey located in the cellar.

However, I prefer to think of it as a roach motel. Because technically, once you are elected to Parliament, you can’t leave. It is actually illegal to resign from the House of Commons.

Yet, people seemingly do all the time.

Learn more about the convoluted way you can quit the House of Commons on this episode of Everything Everywhere Daily.

So to start, yes, it is technically true that you can’t resign from the House of Commons.

This dates back almost 400 years when serving in parliament was a very different experience than it is today.

Members of parliament, or MP’s, didn’t get paid until 1911. Up until then, it was a completely unpaid position.

Traveling to London back then was a time-consuming affair, especially for MP’s who lived in distant districts. Even though parliament only met for a few weeks a year, the session plus travel time, was time you couldn’t spend attending to your personal affairs, which meant that many MPs lost money.

Most MP’s considered serving in parliament an arduous task, not an honor.

So, when the session of parliament came around every year, many members would just resign rather than make the trip, especially considering that many were elected against their will.

It became such a problem that parliament passed a law in 1624 which prevented members from resigning. The law specified that “… that a man, after he is duly chosen, cannot relinquish” his position.

That law from 1624 is still on the books and it is still against the law for anyone to resign from the House of Commons.

The thing is, MP’s seemingly resign from parliament every session. While it doesn’t happen every week, it also isn’t a totally unheard of event. In fact, when Prime Ministers have to step down, they will often vacate their seat in parliament as well rather than stay on in disgrace.

So, how do they do it? How can you resolve MP’s resigning when it is against the law to resign?

Well, parliament had other concerns as well beyond making sure its members showed up.

One of those concerns was being an independent check on the monarchy.

The House of Commons is the house of “commons”. If one of its members was in the pocket of the King, it would put them in a conflict of interest.

So, in 1680, Parliament passed a law which stated that any MP who “shall accept any Office, or Place of Profit, from the Crown, without the Leave of this House … shall be expelled [from] this House.”

So basically, if the King or Queen appoints an MP to an office, the MP would be automatically expelled.

It turns out that this law made for an exceptionally nice loophole to get around the previous law stating that MPs can’t resign from parliament.

They might not be able to resign, but they can get expelled.

In 1740, one sitting member of parliament, Sir Watkin Williams-Wynn, was appointed as the Steward of the Lordship and Manor of Bromfield and Yale.

Parliament determined that this position fell under the 1680 law and that Sir Williams-Wynn was expelled from parliament.

The person who put two and two together was an MP called John Pitt.

In 1750, he wanted to vacate his seat so he could run for another seat. The problem was, he wasn’t allowed to run so long as he was sitting in parliament and was representing another district.

He wrote to Prime Minister Henry Pelham and told him his predicament. He wanted a position from the King so he could get removed from parliament to allow him to run for the new seat. Technically, the law only said that sitting members of parliament would get removed if they accepted a position. If you already had the position before you were in Parliament, it was fine.

The Prime Minister talked to King George II and got Pitt appointed as the Crown Steward and Bailiff of the three Chiltern Hundreds of Stoke, Desborough, and Burnham.

For those of us who aren’t up on English geography, a hundred is a division of a county, and the Chiltern Hills is an area northwest of London.

So, even though the position had no responsibility or income, because it was a crown position, it technically allowed a sitting member of parliament to be removed.

This appointment became the legal fiction upon which it became possible for members of parliament to resign. They weren’t resigning so much as they were getting kicked out.

This process of resigning without resigning became known as “Taking the Chiltern Hundreds”.

Now, when someone wants to leave parliament, the Chancellor of the Exchequer simply appoints them to the position.

In 1844, a second empty title was also used to get people kicked out of parliament. The Crown Steward and Bailiff of the Manor of Northstead was first used in April 1842 MP Patrick Chalmers to leave parliament.

These two positions, the Chiltern Hundreds and the Manor of Northstead are used today for removing sitting members of parliament. They are alternated in the event that two MPs should resign at the same time.

The MP who is assigned the title holds it until the next member of parliament resigns.

In theory, the Chancellor of the Exchequer can refuse an MPs request to be appointed to one of the positions, but that hasn’t happened since 1842.

There are a few other empty titles that have been used in the past to remove MPs from parliament. Some of them include:

There have been times where this system has been put to the test.

15 pro-Union MPs from Northern Ireland resigned en mass on December 17th, 1985. The way they handled it is that they were all assigned the two titles over the course of a single day, with most of the MPs only holding the position for a few hours.

In 2011, Sinn Féin MP Gerry Adams, who is a staunch Irish Unionist, resigned from parliament but didn’t apply for a crown office.  When questioned about it, then Prime Minister David Cameron claimed that Adams had been appointed to a Crown Office, but Adams denied it.

They just sort of did a lot of hand waving and in effect he resigned. It was never really officially resolved. The Crown lists him as having held the office, but he denies ever having accepted it.

So, resigning from parliament one of those weird historical quirks. You can’t do it, except you really can do it.

The next time you want to quit your job, but you don’t want to quit, just tell your boss that you’d like to be appointed to the Chiltern Hundreds and see how they react.

When I first discovered this podcast a few weeks ago, I was immediately hooked. I binge listened to all 250+ episodes at the time in about a week. Listening to this podcast has become a part of my morning routine… arguably the best part of it.

It’s a daily version of 99% Invisible, but for history nerds (I am unable to decide who was the better sounding voice, Roman Mars or Gary Arndt)

Thank you for making my mornings better.

Thanks, Jorge. I will take on Roman Mars anytime, anywhere. In fact, Roman if you’re listening, I challenge you to the main event of next year’s Podcastmania. Me versus you, mano-a-mano, no show topics barred.