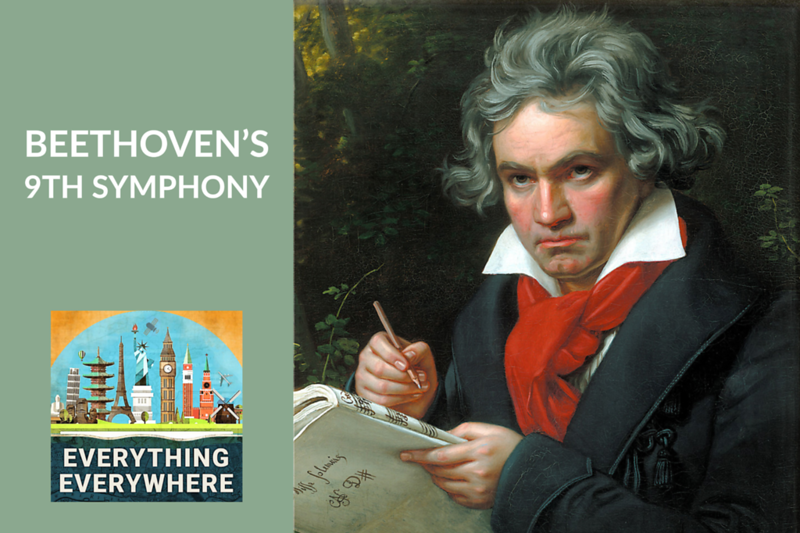 On May 7th, 1824, in Vienna, Austria, the musical world changed forever.

The assembled crowd in the Kärntnertor Theater heard one of the most groundbreaking and revolutionary musical performances in history.

However, there was one person in attendance who didn’t hear the performance.

Learn more about Beethoven’s 9th Symphony, and how it changed the musical landscape forever, on this episode of Everything Everywhere Daily.

My audiobook recommendation today is Beethoven: Anguish and Triumph by Jan Swafford.

Jan Swafford’s biographies have established him as a revered music historian, capable of bringing his subjects vibrantly to life. His magnificent biography of Ludwig van Beethoven peels away layers of legend to get to the living, breathing human being who composed some of the world’s most iconic music.

Swafford mines sources never before used in English-language biographies to reanimate the revolutionary ferment of Enlightenment-era Bonn, where Beethoven grew up and imbibed the ideas that would shape all of his future work. Swafford then tracks his subject to Vienna, the capital of European music, where Beethoven built his career in the face of critical incomprehension, crippling ill health, romantic rejection, and his ever-encroaching deafness.

Even if you don’t know anything about classical music, you have probably heard at least parts of Beethoven’s 9th symphony even if you didn’t know it.

Orchestras consider it the good china that you bring out for special occasions. They will often play it for the opening and finale of their seasons.

It is played during Olympic ceremonies and on New Year’s Eve. It has been used as the national anthem for countries, television commercials, and it was played when the Berlin Wall came down.

This story of the 9th symphony and how this work came to be is one that is highly improbable.

When he was 26 years old, Beethoven began to experience hearing loss. In his letters from that time period, he had reports of ringing in his ears. In 1801, at the age of 31, it is estimated that he has lost 60% of his hearing.

At the age of 46 in 1816, he was totally deaf. It was a particularly cruel affliction for a musician and a composer.

By the time the 1820s rolled around, Beethoven was already famous and successful. He had written eight symphonies, one opera, and many other pieces for solo and smaller groups. He had already composed the vast majority of his musical works.

Much of his time during his late 40s and early 50s was spent dealing with family matters, which in many respects was him sticking his nose into the affairs of his brothers and nephew when it wasn’t wanted.

In 1817, he received a commission to compose a symphony for The Philharmonic Society of London.

He basically did nothing with the symphony for five years, or at least he didn’t put anything to paper.

One thing which Beethoven had always wanted to do was to put his favorite poem to music,  “An die Freude” which was written by Friedrich Schiller. In English, it is called “Ode to Joy”.

The Ode to Joy is in German and it was written to be a hymn to the brotherhood of man.

Even though he couldn’t hear, he could still hear the music in his head. Over his career, he had written many smaller pieces with various themes which never left him. They were still floating around inside of him.

While the symphony was commissioned by the Philharmonic Society of London, Beethoven wanted to premier the symphony in Berlin. He felt that Vienna had become too enamored with Italian composers such as Rossini.

However, his friends managed to draft a petition which was signed by other high-profile members of the Viennese music community. This convinced Beethoven to keep the location of the premier to Vienna.

The Kärntnertor Theater was chosen as the location for the premier. It has been 12 years since Beethoven was last on stage, and many people wanted to see what the maestro had in store.

The performance required the largest orchestra which Beethoven had ever assembled. They had both the house orchestra for the theater, the Vienna Music Society, and many other esteemed soloists in the city who all wanted to be a part of the premier.

It is for this reason that the 9th symphony is often called the Choral.

Legend holds that the combined orchestra only rehearsed twice before the performance. The qualify of the premier probably wasn’t anywhere as good as modern performances.

Beethoven insisted on being on stage, even though it was officially conducted by Michael Umlauf. The problem was, Beethoven’s inability to hear made it impossible to properly keep time.  Umlauf, knowing this was going to be a problem, told the orchestra beforehand to ignore Beethoven and just focus on himself.

The house was packed save for the Emperor’s imperial box and many of the other boxes of the nobility. They had all already left the city for the summer.

The concert opened with the Vienna premiere of Beethoven’s Missa Solemnis which had premiered a month earlier in St. Petersburg, as well as his The Consecration of the House overture.

Everyone was there for the main event, however.

During the symphony, the crowd was very loud. Several times the police had to quiet people down.

However, when it was over, the crowd went nuts. There was a rousing standing ovation, however, Beethoven didn’t know it. He couldn’t hear them clapping.

One of the vocal soloists, Caroline Unger, reportedly had to turn Beethoven around so he could acknowledge the crowd. The crowd gave Beethoven five standing ovations, and for each one they waved handkerchiefs, hats, and their hands, knowing that he couldn’t hear them.

Music critics almost instantly and unanimously felt that this was one of Beethoven’s greatest works, if not his greatest.

However, there was some dissension regarding the fourth movement, which was the choral. Many of the critics couldn’t get their heads around a choir and an orchestra together.

However, such complaints were minor and short-lived.

The symphony went on to premiers in Berlin, London, and the rest of the world.

Beethoven died without ever completing another symphony. He was working on his 10th symphony when he died, but he hadn’t gotten very far.

Over time, the symphony developed a legendary status.  Famed conductors such as Richard Wagner, Gustav Mahler, Leonard Bernstein, and Herber von Karajan all had the 9th symphony as one of their favorite pieces to conduct.

The symphony’s fourth movement, the Ode to Joy, became the national anthems for several countries. It was the National Anthem for Rhodesia from 1974 to 1979. When East and West Germany had a united team at the Olympics from 1956 to 1968, they used the Ode to Joy as their anthem at the medal ceremonies.

In 1972, the music without lyrics was adopted at the Anthem of Europe, and in 1985 it was adopted as the anthem of the European Union.

It has become a tradition to play Beethoven’s 9th Symphony on New Year’s Eve for many orchestras.

The tradition has especially taken hold in Japan where there are over 50 performances that take place every year on New Year’s Eve. The piece has become known as the Daiku, which is the Japanese word for “ninth”.

The tradition took hold from German prisoners of war during World War I who would perform it. The Japanese national broadcasting company NHK began performing it in the 1920s and through World War II.

Most of the Japanese performances start at 11 pm on December 31 so they will hit the 4th movement around midnight.

These mega performances are held in arenas where half of the people in attendance are performing.

After Beethoven completed his 9th symphony, there develop something among composers known as the Curse of the 9th. It is a superstition that holds that a 9th symphony will be a composer’s last.

Schubert, Dvo?ák, Ralph Vaughan Williams, and Mahler all died before they could compose their 10th symphony.

American composer Philip Glass actually released his 10th symphony before his 9th just to avoid the Curse of the Ninth.

There are of course many composers that have written more than nine symphonies, but the superstition still exists.

There is one final story about the 9th symphony which deserves addressing. The role in Beethoven’s 9th Symphony in the creation of the compact disc.

In the early 80s, Sony and Phillips had both developed digital storage formats which could be read by lasers. However, their formats had some serious differences. They came together to try to hammer out a standard that both companies could agree on.

The key point of contention was the size of the disc. Mainly, if it should be 11.5 cm in diameter or 12 cm.

The defining piece of music which was used to determine the length of a CD was Beethoven’s 9th. The longest version of the symphony they could find was 74 minutes, so 74 minutes became the standard for the CD.

Supposedly, it was the wife of Sony’s CEO Akio Morita who was a strong advocate of getting the entire 9th symphony on a single disc.

I had heard this story years ago and I had also heard that it was an urban legend. However, in researching the story, there is actually more in support for it than there is against it.

Either way, even though the CD could hold 74 minutes of music, there wasn’t a 74-minute version of the 9th symphony released until 1997, because the tapes which were used for studio masters were only 72 minutes long.

If you’ve never sat down and listened to the entire 9th symphony, I’d recommend it. It is now readily available on every music streaming service and there are several versions on YouTube.

If you ever get the chance to see a performance live, I especially recommend it. It will be something you’ll never forget.