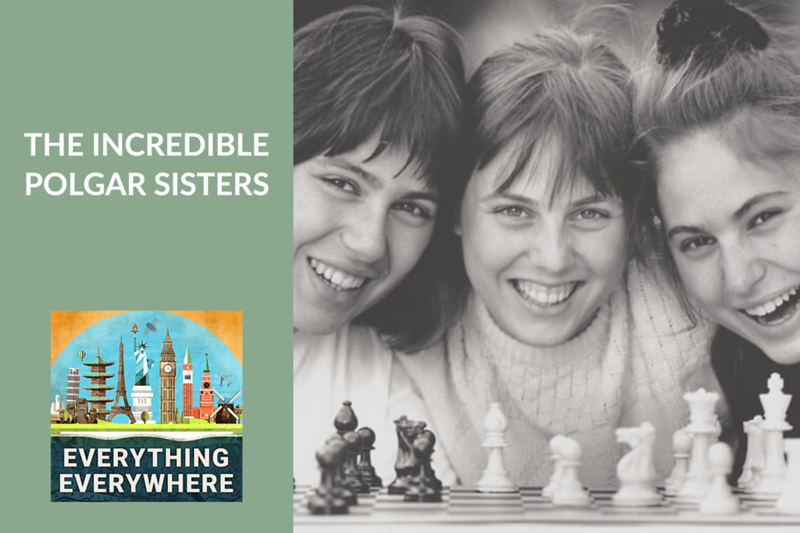 László Polgár was born just after World War II in Hungary. His field of study was the nature of human intelligence. After studying the lives of over 400 great intellectuals from throughout human history, he came to a startling conclusion: geniuses weren’t born, they were made.

So he set about conducting an experiment on his own children. The results were astonishing.

Learn more about Judit, Susan, and Sophia, the incredible Polgar sisters, on this episode of Everything Everywhere Daily.

Have you ever wanted to learn how to play chess, or perhaps just play better?

What if you could learn chess from the greatest player in history? The man who world champion for over 21 years and had the highest chess rating in history: Gary Kasparov.

He has a class on MasterClass where he teaches you the game of chess. There are 7 hours and 20 minutes of instruction divided over 29 videos where he goes through different aspects of the game to help you improve your game.

There are also learn poker from Phil Ivey, gymnastics from Simone Biles, and skateboarding from Tony Hawk.

The debate between whether nature or nurture is responsible for human development has been around for all of human history. Even today you can still find people who will adamantly defend either side of the issue.

Laslo Polgar definitely stood on the nurture side of the debate.

He was a trained psychologist whose focus of study was human intelligence. He had done an extensive investigation on hundreds of people who were considered geniuses throughout history. Everyone from Socrates to Einstein, to Mozart.

He wrote a book called Bring Up Genius which laid out all of his theories of education, child development, and how to make geniuses. He explicitly stated, “Genius equals work and fortunate circumstances… geniuses are made, not born”.

He felt that anyone could become a genius in any field of sport, science, or the arts if you started your education at the age of three, and began to specialize at the age of six.

The problem was, he had no children of his own, and he didn’t have a wife, which was a problem if he wanted to have kids of his own.

So, he began discussing his plan with several women to see if an would be interested in taking part in his experiment.

Eventually, he contacted another researcher in Ukraine named Klara. They exchanged letters with each other, and she was on board with the program. They met each other in the Soviet Union, got married, and moved back to Budapest to begin their project.

Granted, this isn’t the greatest love story ever told. Nonetheless, they were both on board.  They were going to make geniuses.

Here I need to take a diversion to give an explanation about child prodigies.

Child prodigies only exist in a few fields: music, chess, and mathematics.

Mozart is the classical example of a child prodigy. He was touring Europe and composing music before he was 10.

The current world chess champion Magnus Carlsen, became a grandmaster when he was only 15.

Mathimatician Blaise Pascal wrote a mathematical treastie at the age of 9.

You don’t see child prodigies in international diplomacy for example. You’ll never wake up one day and find out that an 11 year old wunderkin diplomat has brought peace to the Middle East.

In other areas like sports, you can excel at an early age, but you can’t really reach the pinnacle of success until you are an adult. Tiger Woods was a golf prodigy, but he was mostly just dominant at his age levels.

What Laslo and Klara determined they would focus on with their children was chess.

One of the reasons why they focused on chess was that it was objective. If they had focused on something like art, it would have been too subjective. Chess has winners and losers. There is a ranking system. It would be very easy to determine if their techniques worked.

One of the biggest obstacles they had to overcome at first was getting approval from the communist government in Hungary to homeschool their children. Once they convinced them of the merits of what they were doing, everything was in place.

He began teaching Susan chess at the age of 4. He did everything he could to make it a game and to make it playful. By Susan’s account, she chose chess because she found the pieces to be like toys and she had fun playing.

In 1973, six months later, she made her public debut. Laslo took his daughter to the Budapest chess club. It was filled with old men and little 4-year old Susan had to sit on a pillow in order to reach the table.

Laslo invited the men assembled in the club to challenge his 4 year old daughter. They were hesitant to play her at first, but she soon began beating almost all of them.

At the age of 5, Susan entered her first tournament and won 10-0.  She became a local chess sensation, but everyone assumed she was just naturally gifted. It was the exact opposite of what Laslo was trying to prove.

Susan went on to an accomplished chess career. She became the third woman in history to reach the rank of grandmaster, and she was the the women’s world champion from 1993 to 1996.

After her playing career, she went on to become the most successful collegiate chess coach in history. She has coached teams to seven national championships.

In 1974, Laslo and Karla had their second child, Sophia. Like her older sister, she grew up in a house full of chess.

She too excelled at chess.

Sophia was the runner-up in the under 14 world chess tournament at the age of 12, becoming the first girl ever to reach the finals.

Two years later, she entered at tournament in Rome won the tournament with an astonishing 8 ½ out of 9 points, beating several grandmasters in the process. It was one of the most dominant performances in a tournament in history.

Once when former world champion Bobby Fischer visited her family in Budapest, she beat him three games in a row.

Sophia achieved the rank of International Master, which is just below the rank of grandmaster.

In 1976, Laslo and Karla had their third and final child, Judit.

Out of the three, Judit was unquestionably the best chess player.

In 1991, at the age of 15 years and 4 months, she became the youngest grandmaster in history, beating the record set by Bobby Fischer.

She became the youngest player in history to break into the top 100 chess players when she was ranked 55th in the world at the age of 12.

By the time she was 15, she was the top ranked woman in the world.

In 2002, she became the first woman to beat a reigning world champion whe she beat Garry Kasparov.

She never won a women’s world championship because she refused to play in women’s only tournaments.

She is unquesitonably the greatest female chess player in history.

It should be noted that the Polgar girls were not raised to be chess playing robots. They were also taught to be polygots, being taught Esperanto, German, Russian, and English, in addition to their native Hungarian.

All three were also taught upper level mathematics in addition to other normal school subjects, plus were able to travel the world by attending chess tournaments.

Despite the results, none of the Polgar sisters were ever forced to play chess. Laslo and Klara created a home where the children could play and explore their curiosity.

As Judit said in an interview, “In the beginning, it was a game. Later, chess for me became a sport, an art, a science, everything together. I was very focused on chess and happy with that world. I was not the rebelling and going out type. I was happy that at home we were a closed circle and then we went out playing chess and saw the world.”

It should be noted that Laslo Polgar wasn’t a great chess player. He was mediocre at best. But like Tiger Woods’ father Earl, he and his wife provided an envinroment for his daughters to excel at something they loved.

He set out to create the greatest family of chess players in history, and he did exactly that.

Legend has it that after his daughters grew up and moved out, he wanted to adopt three children from developing countries and go through the same process with them. However, his wife convinced him that there was more to life than chess, and the plan was abandoned.

Laslo’s experiment has been called the greatest experiment in the history of education.

The recent Netflix series Queen’s Gambit, traces the fictional story of a chess prodigy named Beth Harmon who came out of nowhere to be one of the greatest chess players in the world.

What the Polgar sisters showed is that it doesn’t quite work that way.

Great geniuses don’t just happen. While there might be an element of genetic luck, whether its Mozart, Tiger Woods, or Judit Polgar, genius needs an environment to flourish.

Today’s five-star review comes from listener jkuknow from Apple Podcats in the United States. They write:

Let me tell you what I’ve learned!!!

After bingeing this show for the last few months I am the now the person that knows a little fact about almost everything and constantly bring up said facts in conversation. I can’t tell if that’s a good thing or if people think I’m a know-it-all but I’ll wait for an episode about self-awareness to help me decide. Thanks, Gary! I think? ;)

Thank you jkuknow. As my Uncle Ben once told me, with great knowledge comes great responsibility. Make sure you use your knowledge for good, instead of evil…..unless you can use it to make money off of your friends, then go for it.