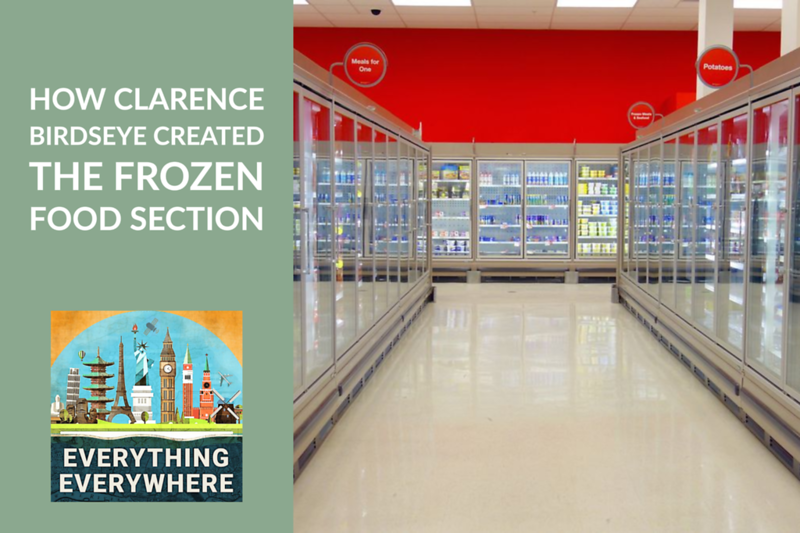 For thousands of years, food storage was one of humanity’s biggest problems. Even if you could grow or hunt sufficient calories when food was abundant, it was very difficult to store those calories for when food was scarce.

One man made a huge advancement in our ability to store foods, which now allows us to enjoy fresh food all year round.

Learn more about Clarence Birdseye, and the invention of frozen foods, on this episode of Everything Everywhere Daily.

Way back in the day, food storage was a huge problem.

Let’s say you and your tribe went hunt and came back with a really large animal. Basically, you had to eat the vast majority of it before it spoiled. You could take some of the meat and dry it, but that was really the only option for storing food.

Native peoples of North America would often create a food called pemmican, which was dried meat, berries, and fat all mixed together. It was a high-calorie food which was great for when you and your clan would move from one place to another.

Fermentation became a popular option all over the world. Korean kimchi, German sauerkraut, and Swedish surströmming, which I did a previous episode on, are all fermented foods that are still with us today.

Salt was used as a preservative as well. You could store food in brine, or just cover it in salt, which would kill bacteria.

Later, canning became an option as well. You would basically boil everything to kill the microbes, and then seal the container before it cooled down.

What most of these methods had in common was that they fundamentally changed the food. Dried, salted, fermented, or canned food didn’t taste like fresh food. The process chemically altered the food, still keeping it edible, but removing nutrients and taste.

Going into the 20th century, this was still pretty much the state of things.

We had managed to figure out how to preserve ice year-round, and people began to get iceboxes, but that could only preserve foods temporarily.

Freezing food wasn’t yet a thing.

Or, I should say, freeing food wasn’t something that really worked. In colder climates, you certainly could freeze food. In the late 19th century and early 20th century methods to freeze water were developed.

This technique was used in the late 19th century for shipping meat in bulk long distances.

But there was a big problem with freezing foods. It would often turn the foods to mush.

This is a consequence of the unique properties of water and what happens when you freeze it. Unlike most substances, when water freezes, it expands. This is the reason why potholes can develop in northern latitudes, and it is why food that is improperly frozen can taste horrible.

As food slowly freezes, the water in the cells form ice crystals, which bursts the cell walls. When the food thaws out, the cell walls leak, turning the food mushy.

Frozen food was so bad at this point that New York State even passed a law preventing it from being fed to prisoners.

This is why crops like oranges are so vulnerable to freezing temperatures which might threaten an orchard. Once an orange, or any other plant for that matter, freezes, it can destroy the plant.

Clarence Birdseye was born in Brooklyn in 1886. He had an interest in science and nature throughout his life. He attended Amherst College but had to drop out due to finances.

He took several jobs as a researcher for various government departments and did research projects doing things like collecting ticks in Montant to try to find the cause of Rocky Mountain Spotted Fever.

In 1912 he joined a project which took him to Labrador in what is today Canada. Back then, Newfoundland and Labrador were actually separate countries.

In Labrador, he met many Inuit people who taught him the secrets to fishing in the winter. One of the things which they did is take the fish they caught and immediately throw them onto the ice where they would quickly freeze in temperatures which would dip down to -40, which is the exact same temperate in both Fahrenheit and Celsius by the way.

Clarence quickly realized something interesting about the fish. After he thawed it out, it tasted fresh.

It was far better than the frozen fish he had tasted back in New York.

The difference was the temperature at which he froze the fish, which was far colder than what most foods were normally frozen at.

He realized that he had something here that people would pay for and was superior to anything else currently being done.

Several years later he returned back to the United States and began experimenting with the process of flash freezing, trying to artificially replicate the conditions he found in Labrador in the winter.

In 1922, he began conducting experiments on the flash freezing of fish.

This eventually led to the creation of the Birdseye Seafoods company which began freezing fish fillets in chilled air at -45 Fahrenheit.

This first company eventually went bankrupt, as there wasn’t customer demand for his food. Moreover, he realized that simply freezing the food wasn’t enough. He needed to develop an entire infrastructure around frozen food.

He also kept tinkering with the flash freezing technology. He developed the double belt freezer, which was two extremely cold plates that would flash freeze packages of fish and vegetables quickly. This is considered the beginning of the frozen food industry.

In 1929, he sold his company and all its patents to what would become General Foods. They eventually launched an entire line of frozen food products called Birds Eye, named after Clarance Birdseye.

Flash freezing was only the first step, however. Once it was frozen, you had to get the food to the customer. That required an entire supply chain that could handle frozen food.

In 1930, the first frozen food sections were places in stores around Springfield, Massachusetts. The initial offerings included a selection of fish, meat, berries, spinach, fruit, and oyster.

The new frozen foods were a hit was with consumers as it tasted better than canned food.

An entirely new industry developed for the transportation, storage, and sale of frozen food.

In WWII, frozen foods became even more popular as the US government discouraged people from purchasing canned food. Canned foods were given priority for troops fighting overseas because they could be transported without freezing. Frozen foods were reserved for people on the homefront.

Clarence Birdseye passed away in 1956 at the age of 69. He left a legacy that can be seen anytime you walk into a grocery store.

By the year 2026, the frozen food industry, in just the United States alone, will be estimated to be over $366 billion dollars.

So the next time you set foot in a grocery store and walk past the frozen food section, give a moment to thank the man who came up with the idea by ice fishing with Inuits in Labrador.