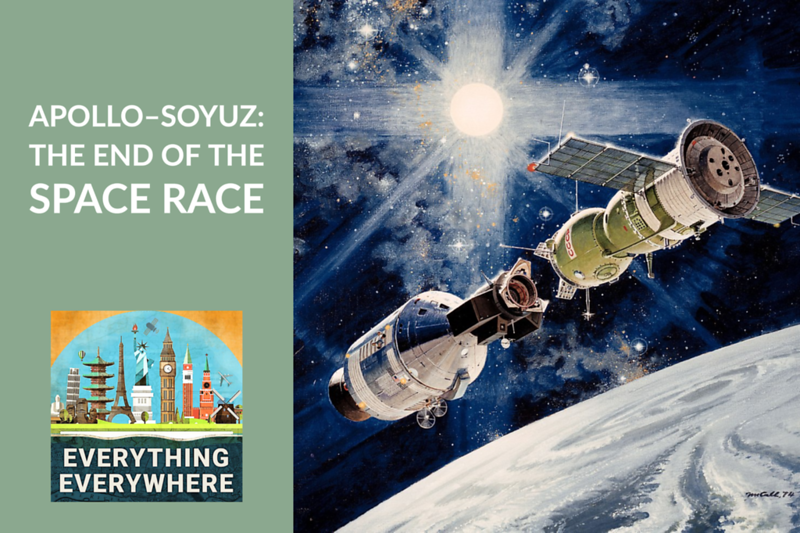 The space race officially began on October 4, 1957, at 7:28 PM Moscow Time. That was when Sputnik was launched into orbit as the first artificial satellite, and from that moment, it was on.

But when did the space race end? That is a much trickier question and there is no formal answer.

Learn more about the Apollo/Soyuz Test Program and the handshake that ended the space race on this episode of Everything Everywhere Daily.

If you asked most people when the space race ended, I’m sure most of them would say that it ended when Neil Armstrong set foot on the moon.

This isn’t a bad answer. This was the primary objective, at least for the Americans and it was, and still remains, the biggest feat in spaceflight.

However, the space race was just as much about geopolitics as it was about spaceflight. When the moon landing took place, it didn’t stop the cold war and the greater competition between the Soviet Union and the United States. It also didn’t stop any of the American or Soviet space projects.

The US launched 6 more Apollo missions after Apollo 11.

The Soviets continued to set firsts in space as well. In 1971 they launched the first space station, Salyut 1. They began setting records for the length of time in space

As the 70s began, the moon race was over and the Vietnam War was winding down. The Nixon administration wanted to usher in a period of warmer relations with the Soviet Union, which was known as détente.

In May 1972, the two countries signed the Agreement on Cooperation in the Exploration and the Use of Outer Space for Peaceful Purposes. As part of this agreement, both countries agreed to participate in a joint space mission.  Each country would launch one of its ships, and they would then dock in space where the respective astronauts could greet each other.

Officially, it was known as the Apollo-Soyuz Test Project. In theory, the purpose of the mission was to test the ability of two different space programs to rendezvous in space, for the ships to dock, and to see if such a system would be possible for future space rescue missions.

In reality, it was a very elaborate photo opportunity and publicity stunt. Each country wanted to show the world that they were the good guy and were using space for peaceful purposes.

Once the politicians made the decision to create the mission, the job then passed to the engineers.

The Americans and the Soviets both had spacecraft designs which they were using, and their hatches were totally incompatible.

The Americans would be using one of the remaining Apollo capsules which didn’t get used when congress cut funding for future moon landings. The Apollo capsules could seat three astronauts.

The Soviets would be using their Soyuz capsule, which was designed to ferry cosmonauts to the Salyut space station. It could only seat two cosmonauts.

The engineering teams for both programs had to figure out how to make the two capsule docking systems compatible.

Both sides complained about the other side’s engineering.

The Soviets found the Apollo capsule very technical and confusing. It required highly trained astronauts to operate it, and they thought it was dangerous.

Likewise, the Americans found the Soviet system too simple with a lack of redundant systems requiring too much of the flight to be automated. If one system on the Soyuz capsule were to fail, the entire mission would have to be aborted.

In reality, it was a difference in design philosophy. The Soviet system was cheaper to design and manufacture, and because it was simpler, it didn’t require as much training. The Soyuz was only built to travel in Earth orbit, so aborting a mission was always a possibility.

The Apollo capsule was designed to go to the Moon. You can’t easily abort a moon mission and come back to Earth right away. You need redundant systems in case something went wrong on the way to the moon, like what happened with Apollo 13.

In the end, they resolved their differences by creating a docking module which would be a type of adaptor for the two capsules. It was called the Androgynous Peripheral Attach System, or the APAS. Actually, the name sounds sort of odd because they wanted to keep the acronym the same in both Russian and English, so NASA came up with a name that kept the letters APAS which was the equivalent of the Russian.

Each ship would carry half of the docking module that would connect to their ship. They could connect together with a system that was like interlaced fingers. Either side could be passive or active in the docking procedure.

The Americans selected three astronauts for the mission. The commander was Thomas Stafford. He had previously flown on Gemini 6, Gemini 9, and he flew around the moon on Apollo 10.

The command module pilot was Vance Brand. It was his first space flight, and he later went on to fly on three space shuttle missions.

The final member of the crew was Deke Slayton. Deke was one of the original Mercury 7 astronauts. However, he was the only one who had never flown in space. He was diagnosed with a heart condition and was grounded. He became the head of the Astronaut Office and was responsible for assigning astronauts to missions. One of his last acts was assigning himself to this mission after he was medically cleared.

The two Soviet cosmonauts were Valeri Kubasov, who had flown on one previous mission and would later fly on one more, and Alexei Leonov, who was the first person to walk in space. Had the Soviets made an attempt to land on the moon, he would have been their Neil Armstrong.

The two teams trained together in both the Soviet Union and the United States.

There were many political hurdles that had to be overcome, including the design of the mission patch and the name of the mission. The Americans called it Apollo-Soyuz, and the Soviets called it Soyuz-Apollo. The patches were mirror images of each other, with the Americans having Apollo on the left side, and the Soviets having Soyuz on the left side.

The Soyuz launch was the first space launch ever televised live on Soviet television.

The Americans had to use one of its last Saturn 1B rockets, which was also surplus from the Apollo Program.

The two ships launched within hours of each other.

Two days later, on July 17, the two ships rendezvoused and docked. The commanders, Thomas Stafford and Alexi Leonov came through the respective hatches and shook hands.

This was the conclusion of the space race.

The two ships stayed together for 44 hours. They undocked practiced docking several times, visited each other’s ships, traded food and souvenirs, and then went on their ways.

The Soviets stayed in orbit for two more days and the Americans for another five days.

It was the last Apollo mission and the official end of the Apollo program. The Americans wouldn’t launch another person into orbit for six years until the space shuttle program started.

The capsules used in the mission are located today in Los Angeles and Moscow. There is a full-size mockup that was used for training which is on display at the National Air and Space Museum in Washington DC.

The Apollo-Soyuz mission isn’t very well known. It was conducted mostly for publicity, and despite the docking, it didn’t really advance the field space flight.

However, as modest as it was, it laid the foundation for future collaborative space projects which would eventually culminate in the International Space Station.