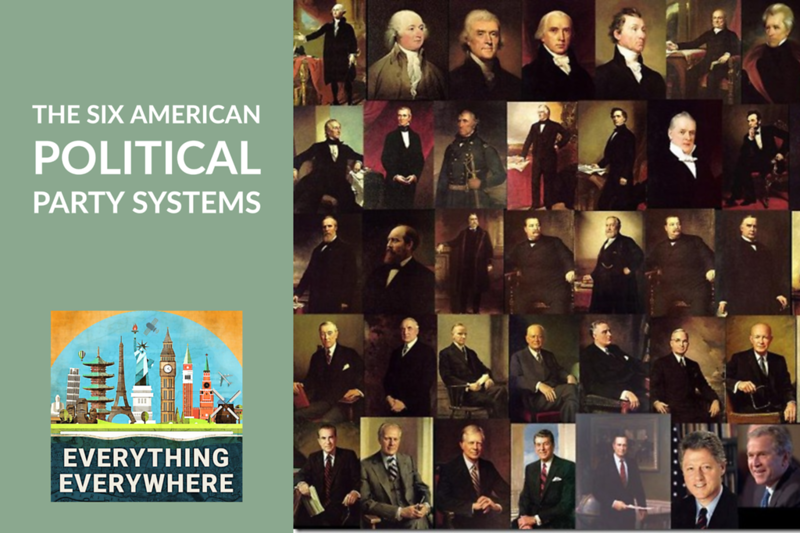 American history isn’t a single linear story. There are periodic changes to the political order where political parties and affiliations are reordered.

According to political scientists, there have been six different political eras in American history. Each era was a reflection of issues that confronted the country at the time.

Learn more about America’s six political eras and what caused them on this episode of Everything Everywhere Daily.

The thing about American political parties is that they weren’t even supposed to exist.

The founding fathers hated political parties and what they called factionalism. It was the subject of Federalist Paper #10 written by James Madison was titled “The Utility of the Union as a Safeguard Against Domestic Faction and Insurrection”.

Of course, as soon as the government was established, factions began forming immediately. The ironic thing was that the authors of the Federalist papers, Alexander Hamilton and James Madison, were largely responsible for the factions which developed.

The first political party in the United States was the Federalist Party. This group was lead by Alexander Hamilton and many people in the Washington administration including Vice-President John Adams, Chief Justice of the Supreme Court John Jay, and Future Chief Justice John Marshall.

Technically speaking, George Washington wasn’t part of the Federalists. While he is often associated with the Federalists, and his inclinations probably did lie in that direction, he never associated himself with any party.

The other party was the Anti-Federalists which were led by Thomas Jefferson. They eventually changed into the Democratic-Republican Party.

This alignment of the Federalists and Democratic-Republicans is known as the First Party System.

This system is considered to have lasted until 1824. If you remember my previous episode on the presidential election of 1824, by this time the Federalist party had completely disintegrated.

In 1820, James Monroe ran for reelection completely unopposed because the Federalists weren’t organized enough to have a candidate.

In 1824, there were four candidates, all from the Democratic-Republican party which received electoral votes. John Quincy Adams won the election even though Andrew Jackson had more popular votes.

The Democratic-Republican party dissolved because of the infighting and new political parties were created in its wake.

Andrew Jackson’s faction created the Democratic Party, which is the same continuous party that exists by the same name today.

The other major political party which developed was the Whig Party. The name began as a joke taking the name of the British Party of the same name.

The big issues were the Bank of the United States, Jacksonian populism, national expansion, and the Mexican-American War. Other than Jackson himself, every president during this period only served a single term or less. Most of them are some of the most forgettable presidents in US history.

This system eventually fell apart due to the issue of slavery. The Whig Party disagreements on slavery resulted in the creation of the abolitionist Republican party in the north, and a host of smaller third parties in the south.

This system was the first which was dominated by the two political parties we have today: the Republicans and Democrats.

Here I should note that when you look historically at political parties in the United States, you shouldn’t put too much stock in what the parties are like today.

In most countries, and in the United States prior to this point, when there is a political realignment, one or more parties just disappeared and new parties took their place. In the US, the same parties have existed, but they just adopt new positions and change over time.

Moreover, issues have changed so much that our contemporary notions of left and right don’t necessarily even make sense in a historical context.

So, with that being said, the Third Party System lasted until 1896.

This period was dominated by the Republican Party at the Federal Level. The biggest issue was of course the Civil War and Reconstruction. There were deep divisions between North and South during this period, the westward expansion of the country, and an enormous increase in the population and economy of the country.

This period was also known economically as the Gilded Age. The United States became the largest economy in the world in 1890.

The Third Party System lasted 50 years, which was the longest of any of the political eras until the sixth.

The Third Party System fell apart due to the excesses of the Gilded Age and the Panic of 1893, a largely forgotten event that will be the subject of a future episode.

The 1896 election of William McKinley ushered in the Fourth Party System. This was known as the Progressive Era. The big issues were breaking up monopolies, a surge in immigration to the US, increased US involvement in world affairs, women’s suffrage, prohibition,

As with the Third Party System, the Fourth Party System was dominated by the Republicans at the national level, save for the presidency of Woodrow Wilson.

This era too saw an enormous expansion of the population and economy of the country.

It also saw the United States get involved in its first foreign wars with World War I and the Spanish American War.

The thing which derailed the Fourth Party system was the Great Depression.

The subsequesnt realignment lead to domination during the Fifth Party System of the democrats. In particular, it was dominated by Roosevelt who was elected president as a record four times.

In addition to the Depression, this period is known for the US involvement in the Second World War, after an extended period of isolation, and the rise of the United States as a global superpower.

There is a bit of debate over the end of the Fifth Party System and the creation of the Sixth Party System. The date when the transition happened is usually given as 1968 but sometimes 1964.

There was a huge cultural transformation in the 1960s which caused a realignment of political parties. The South was solidly Democratic ever since the end of the Civil War. The election of Richard Nixon and his Southern Strategy changed the traditional political alignments. In addition to the change in the South, many solid Republican areas in the North also started voting Democrat.

Some also consider the 1964 election with the Republican nomination of Barry Goldwater to be the beginning of the Sixth Party System and others consider it changing as late as 1980 with the election of Ronald Reagan. Still, others put the start of the Sixth Party System in 1992 with the Republicans taking the House of Representatives after almost half a century of Democrat control.

One of the reasons why there is so much debate as to when the Sixth Party System started, is simply that we are so close to it.

As most of you have lived through either all or most of this period, I probably don’t need to remind you of the events of the last 50 years.

The Sixth Party System has been the longest in the history of the United States.

However, there are some political scientists that have suggested that we have entered the Seventh Party System with the election of 2016.  There might be a political realignment underway, but it is really hard to tell when these things are happening when you are in the middle of it.

These are things that are usually only noted in hindsight. Several decades from now, once the dust settles, we’ll have a better idea of just how big and permanent any realignment might have been.

The division of United States History into these political eras certainly a crude tool and there can be plenty of quibbling about where the division for some of these eras lie. Nonetheless, it is a useful tool for understanding US history.