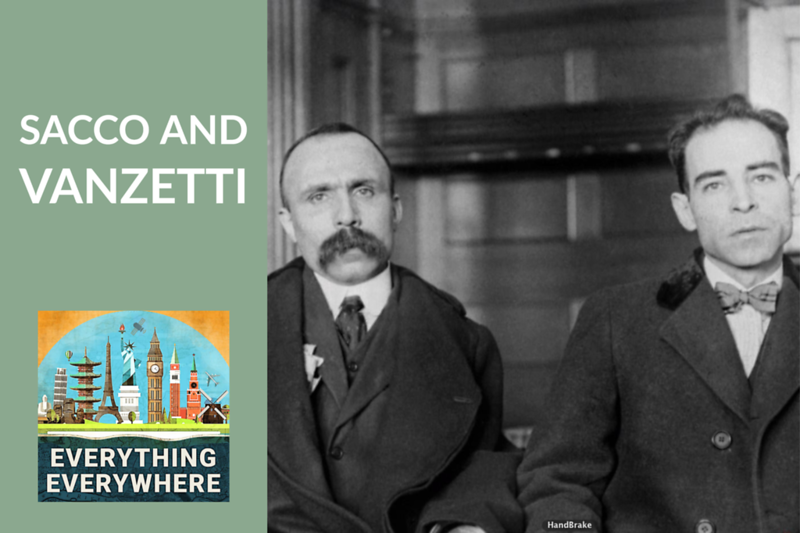 In April 1920, two men who were delivering the payroll to the Slater-Morrill Shoe Company in Braintree, Massachusetts were killed in broad daylight.

The payroll was taken by the killers, and they jumped into a getaway car.

A few weeks later, two Italian immigrants with known ties to radical anarchist groups were arrested for the murder. It became one of the most controversial criminal cases in US history.

Learn more about Nicola Sacco and Bartolomeo Vanzetti, and the case which captivated the entire world, on this episode of Everything Everywhere Daily.

The trial of Nicola Sacco and Bartolomeo Vanzetti is one of the significant moments in the legal history of the United States in the 20th Century. The trial became a divisive issue in American and World politics, and what you thought of the guilt or innocence of Sacco and Vanzetti had more to do with political beliefs at the time than it did with the actual merits of the case.

Before we get into the case itself, it is first necessary to understand the climate in which the case took place.

In 1919, there was a series of anarchist bombings in the United States. In April, three dozen bombs were sent via the postal system to various political and law enforcement officials across the country. The packages were designed to explode after being opened, however, they were mostly ineffective.

The bombings were organized by Italian immigrant and anarchist Luigi Galleani.

Galleani believed that murder and assassination were necessary to overthrow government institutions. In the June bombings, each explosive device was delivered with a note which read:

There was one person in particular who was the target of both bombing attempts. One A. Mitchell Palmer, the Attorney General of the United States.

He instituted what became known as the Palmer Raids, which targeted anarchists and communists, most of whom were Italian and Eastern European Immigrants.

Luigi Galleani’s organization was considered at the top of the government’s list of dangerous enemies.

Sacco and Vanzetti were both known anarchists and followers of Galleani.

The crime itself took place on April 15, 1920. A security guard named Alessandro Berardelli and a paymaster named Frederick Parmenter were delivering the payroll for the Slater-Morrill Shoe Company factory in Braintree, Massachusetts.

The men were carrying two large steel boxes full of cash when they were approached by two men and shot dead in the street.

The two men took the boxes of cash containing over $15,000 and fled in a waiting car.

To make a very long story short, the police suspected Italian anarchists based on previous similar crimes. When running up a lead on the getaway car, they found connections with people who had weapons that matched the ones used in the crime.

This led them to Sacco and Vanzetti. When asked about guns, they said they didn’t have any, yet they were carrying firearms on their persons.

They were placed into custody and charged with murder on May 5, and the trial began on June 22.

The trail was a mess on many different levels. The prosecution relied on ethnic differences between the Italian defendants and the jurors. There were conflicting testimonies. The witnesses claimed that they saw different things. They had different stories for each of the defendants.

There was conflicting ballistics testimony.

The defendant’s politics were also brought into the trial, to prejudice the jury against them. It was brought forward that both men went to Mexico in 1917 to escape the draft for World War i.

A defense committee was founded soon after their arrests, but they didn’t really help during the trial. Vanzetti claimed that their defense was so bad that they might as well have been working for the prosecutors.

On September 14, the jury took only three hours to find both men guilty of murder.

After the indictment, it is believed that the Galleani organization began a bombing campaign, in retribution. In addition to a series of mail bombs sent to US embassies around the world, they were also responsible for the Wall Street Bombing of September 16.  That bomb killed 40 people and injured 143. It was the deadliest terrorist attack in American history up until that point.

At the time of the trial, most people in the country still hadn’t heard of Sacco and Vanzetti. The trail itself was really only reported on in Boston.

It was only after the trial when the reports of how these men were treated were made public, that the men became a cause celebre.

The defense committee began talking about the trial and writing articles in many leading intellectual journals.

Socialist and anarchist activists around the world began using Sacco and Vanzetti as a rallying cry.

Efforts to get the men a retrial or an appeal went nowhere. All requests were denied.

In 1925, a convict by the name of Celestino Medeiros confessed to the murders, but even the confession wasn’t enough to get a retrial.

Harvard Law Professor and future Supreme Court Justice, Felix Frankfurter, wrote a lengthy article about the case, detailing all of the problems and how it was a miscarriage of justice.

Authors such as HG Wells and Upton Sinclaire both advocated for Sacco and Vanzetti, and Sinclaire wrote a fictional book about the case called “Boston”. It was a fictional retelling of what happened to the two men.  More on this later.

In 1927, seven years after their conviction, Sacco and Vanzetti were sentenced to death. At midnight, August 23, 1927, both men were executed by electric chair.

The next day, there were violent protests around the world. Demonstrations took place in Geneva, London, Paris, Johannesburg, Amsterdam, and Tokyo. Three people were killed in protests in Berlin.

Over 10,000 lined up to view the open caskets of Sacco and Vanzetti, and 200,000 people lined up in the street for their funeral procession.

After their executions, bombs continued, and several people associated with the case were targeted, including some jurors, the executioner, and the judge who presided over the trial.

The Sacco and Vanzetti case eventually did lead to reforms of the judicial system and capital cases in the State of Massachusetts. The State Supreme Court was given the power to call for a new trial if new evidence came forward.

With regards to the first question, it is almost universally agreed upon that Sacco and Vanzetti didn’t get a fair trial. There were a host of problems with the way the trial was conducted which would result in a mistrial today.  Moreover, there have been multiple Supreme Court cases since then which would have prevented the same results which took place in 1920.

We still have the transcripts of the trial, but most of the physical evidence from the trial including the bullets and shell casings have been lost or damaged over time.

The question of if Sacco and Vanzetti were actually guilty is a very different question than if they received a fair trial.

Upton Sinclaire came to Boston vehemently sure that Sacco and Vanzetti were innocent. As he began interviewing people to write his book, he began to have doubts about their innocence.

After their execution, he spoke privately with their defense attorney Fred Moore. During this discussion, Moore confessed that Sacco and Vanzetti were actually guilty and that he had helped create an alibi for the two men.

This confession shook Sinclaire deeply. He changed his book such that the guilt or innocence of the main characters was ambiguous. Many Sacco and Vanzetti supporters were angry at Sinclaire for making this choice, but he never publicly spoke about what he had learned.

It wasn’t until his private letters became public after his death that this became known.

Anarchist leader Carlo Tresca said in 1941 said that Sacco was guilty and Vanzetti was not. By this, he meant that Sacco was the triggerman, but Vanzetti did take part in the robbery.

In 1952, Anthony Ramuglia who was a Boston Anarchist in 1920 confessed that he was approached about providing an alibi for Sacco and Vanzetti but couldn’t because he was in jail on the day in question.

A man named Giovanni Gambera, who was a member of the same Boston Anarchist group in which Sacco and Vanzetti were members confirmed Tresca’s account. Before his death in 1982, he confirmed the story of Tresca.

Ballistics tests were run in 1961, after the technology improved, which indicated that the bullets which killed the men came from Sacco’s gun.

None of this information could have been used in a trial as it is all hearsay, and the confession of his lawyer was a violation of attorney/client privilege, even if it happened after his client’s death.

In the end, the Sacco and Vanzetti case is a troubling one no matter where you stand on things. It was a highly politicized, poorly argued, poorly defended case, violating many of the modern norms for a criminal trial, yet there is a very good chance that the men were in fact guilty.