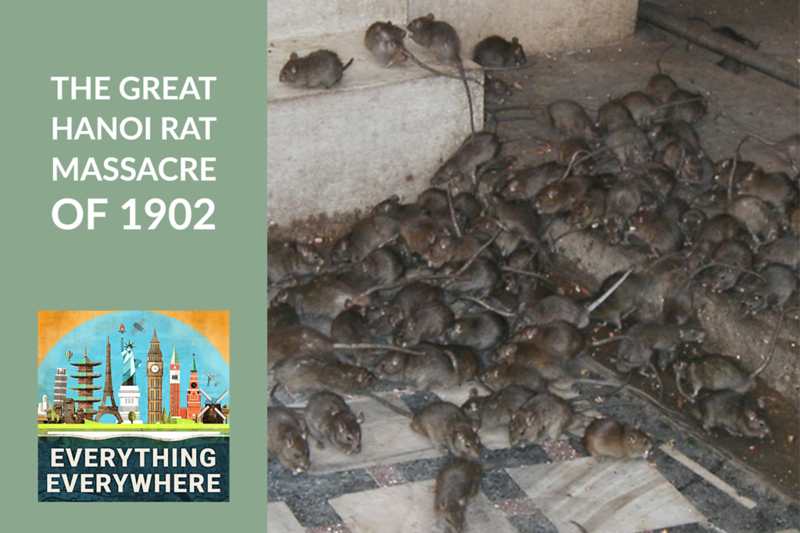 1902, the French governor of Indochina faced a huge problem in the city of Hanoi. They were suffering from a massive infestation of rats and the rats could carry diseases, including the plague.

The governor implemented a plan to get rid of the rats. Thousands of people were recruited in the effort. However, the program had a serious flaw. Not only didn’t it solve the problem, but it made things worse.

Learn more about The Great Hanoi Rat Massacre of 1902, and the problem of perverse incentives, on this episode of Everything Everywhere Daily.

To set the stage for what happened in Hanoi in 1902, you first need to know that at the time, Vietnam, along with what is modern-day Laos and Cambodia were all part of the French colony of Indochina.

A failed former finance minister of France named Paul Doumer was assigned to be the governor of Indochina in 1897.

In 1902, the capital of French Indochina moved from Saigon to Hanoi. The area where the French colonial administrators lived in Hanoi looked like it could have been in France, minus the climate.

The neighborhoods had European houses, wide tree-lined European boulevards, and other European amenities.

The one thing they lacked was flush toilets. Flush toilets would help improve sanitation and bring a modern luxury to the French people of Hanoi.

To this effort, they installed 14 kilometers or 9 miles of modern sewer pipes in the French section of the city. These pipes hooked up all of the French homes and allowed them to have modern flush toilets.

Paul Doumer and the other French administrators were pretty proud of themselves and considered the creation of the sewer system a great accomplishment.

And it was. For a while.

As it turned out, the sewer pipes that were installed were a perfect breeding ground for rats. The pipes were cool, dark, and provided protection from any potential predators.

It also served as a superhighway to all of the French homes which were hooked up to the new sewer system.

Just as an aside, rats breed extremely rapidly. A single breeding pair of rats if left unchecked and given sufficient food can produce half a billion rats in just three years.

The French population in Hanoi freaked out with all the rats coming out of the sewers. Rats were known to transmit disease so the French in Hanoi demanded that something be done about the problem.

The French solution to the problem was simple. They would hire rat hunters that would go into the sewers and start killing the rats.

The program initially looked to be a success. In the last week of April 1902, 7,985 dead rats were brought in.

Throughout May, the number of rats brought in keet climbing. Every day in May saw over 4,000 rats killed, and in June they were killing over 10,000 per day.

This was a lot of rats, but there were two problems. The first is that they had to deal with hundreds of thousands of dead rats. The second was that despite the number of dead rats, it didn’t seem to be putting a dent in the rat problem.

So, the French administrators decided to crank things up a notch. First, instead of hiring rat catchers, they would instead institute a bounty program on rats and anyone in the city could participate. This would significantly increase the number of people on the hunt for rats.

Secondly, to eliminate the problem of dealing with so many dead rats, people only had to bring in the tail of the rat to get rewarded.

Each rat tail would be worth the equivalent of a penny, which wasn’t too bad for your average citizen of Hanoi in 1902.

Soon, thousands of rat tails began flowing in every day. Again, the French administrators patted themselves on the back for the launch of such a successful program.

However, they soon noticed something odd.

Rats began appearing in Hanoi with no tails. People were catching rats and cutting off their tails to turn in for the bounty. They weren’t killing the rats.

Why weren’t people killing the rats? Because they wanted the rats to breed so there were more rats they could harvest for their tails.

Not only was the rat tail bounty program not a success, but it in fact backfired by encouraging people to breed more rats.

The Great Hanoi Rat Massacre is a textbook example of what economists called the Cobra Effect or perverse incentives.

The name cobra effect comes from a similar British program that was run in India. The British wanted to reduce the number of venomous cobras, so they put a bounty on dead cobras which were brought in. Just like the rats in Hanoi, people eventually began breeding cobras.

Eventually, the British found out what was happening and they ended the program. All of the people who were breeding the now worthless cobras let them go, resulting in a bigger population of cobras than there was before the program.

There are actually a shocking number of cases of perverse incentives throughout history, some of which are still being done today.

From 1945 through 1960, the Canadian Federal government would pay provinces 70 cents per day for each child in an orphanage, and $2.25 per day for each person in a psychiatric hospital. An estimated 20,000 children were falsely diagnosed as mentally ill in the province of Quebec so they could get more money.

When the transcontinental railroad was built, Congress paid the railroad companies per mile of track laid. The Union Pacific Railroad would then put in unnecessary bends and curves in the track just so it would be longer, and they would make more money.

In 2002 in Afghanistan, the British military offered Afghan farmers $700 per acre of poppy which they destroyed. This resulted in an explosion of planting poppies so farmers could claim the reward.

IBM had a program in place where they paid programmers for each line of code they wrote. The end result was bloated software that had far more lines of code than was necessary.

A paleontologist working in Indonesia put a bounty on every fragment of a hominid skull that people brought in. What they did was take fully intact skulls and break them, so they had more fragments to turn in.

Farm subsidies are often given for only certain commodities, and they are given without limit. This results in massive overproduction of particular crops, which are then often used inefficiently because there is a large surplus.

Several years ago, the US Mint allowed people to buy $1 coins online with a credit card. Because they were a government agency, they didn’t have to pay for postage, so if you purchased $100 worth of coins it only cost you $100.

People would be tens of thousands of dollars in $1 coins with credit cards, bank the frequent flyer miles, or cash back rewards, then immediately depositing the coins in the back to pay off their credit cards.

Perhaps one of the best recent examples was in the UK they wanted more people to take COVID tests, so they offered £500 to anyone who tested positive for COVID.

People on Twitter immediately pointed out that this was an incentive for people to get COVID, so they could spend the money on a Playstation and then spend the next two weeks playing it because they were quarantined.

There is an incredible number of examples of people creating perverse incentives.

As for Paul Doumer, he eventually returned home and became the president of France in 1931.

Hanoi actually did suffer from an outbreak of bubonic plague in 1906, which most probably was spread by rats.

Even though he and the French eventually left Vietnam, all of the rats remained. Today there are still millions of rats killed in Hanoi each year.