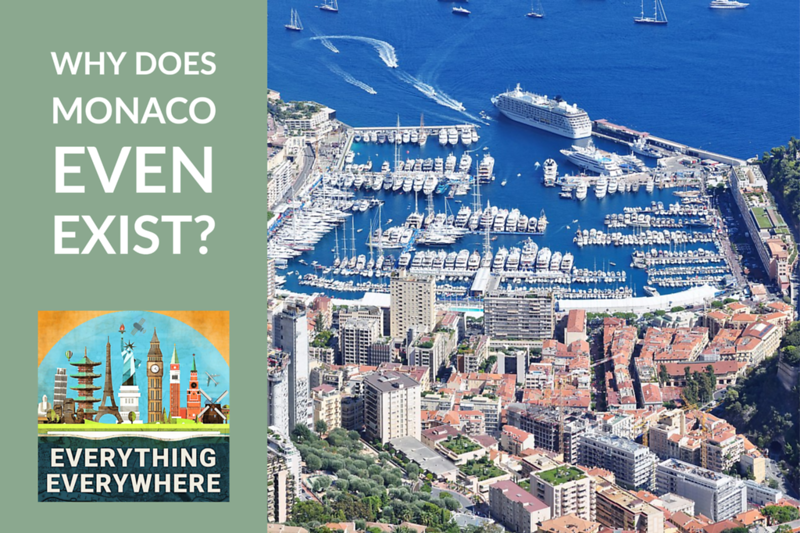 Located on the French Riveria, just a few kilometers from the border of Italy, sandwiched between the mountains and the sea, is the tiny country of Monaco.

Monaco has several distinctions among the countries in the world, not just for its size, but for its population and its history.

Learn more about Monaco, the smallest and wealthiest principality in the world, on this episode of Everything Everywhere Daily.

Let’s say that you want to visit Monaco to pick up the keys to your new superyacht. You might want to check out Skillshare before you go.

They have courses on learning French if you want to brush up on that before you go, as well as Italian, which you also might find useful. They even have courses on how to find a job working on a yacht.

They even have courses on investment and banking, which also can come in really handy if you are going to spend time in Monaco.

Hundreds of years ago, the map of Europe was much more complicated. There were many dozens of kingdoms, dutchies, and principalities.

Over time, almost all of those tiny countries were absorbed into the larger countries we know today.

But not all of them did. A small handful of very small countries managed, through luck, perseverance, and diplomacy, to remain independent to the present day.

I’ve previously done episodes on Andorra, Liechtenstein, San Marino, and Vatican City. Each one of those countries has unique histories which allowed them to wind up as independent countries in the 21st century.

The story of Monaco is similar yet different. It too has managed to survive as a tiny principality into the 21st century, but its story and history are different than the other microstates of Europe.

Historically, Monaco was defined by its most significant, and really only, landmark: the Rock of Monaco. The Rock of Monaco is, as the name implies, a rock that juts out into the Mediterranean sea. It was historically used as a fortification and there is evidence that humans have inhabited the site for at least 30,000 years.

If you are familiar with Monaco, the rock is on the southern side of the main harbor.

The name Monaco comes from the name of a 6th century BC Greek colony that was there called Monoikos. The meaning of the name in ancient Greek was “single house”.

During the Roman period, Julius Caesar came through Monaco after completing the Gallic Wars. The poet Virgil called it, “that castled cliff, Monoecus by the sea”.

The modern history of Monaco, if you want to call it that, dates back to the 12th century. It was part of the Holy Roman Empire.

In 1191, Holy Roman Emperor Henry V gave the land to the city-state of Genoa, and the Genoese colony of Monaco was refounded in 1215.

In 1297, a Genoese nobleman by the name of Francesco Grimaldi, with the help of several other men dressed as Franciscan Monks, took over the fortress which was on the Rock of Monaco. This was the beginning of the Grimaldi family rule of Monaco, which still is in place today.

It didn’t remain in Grimaldi hands for long. It was eventually taken back by Genoa, who then lost it to the Kindom of Aragon in the 14th century.

The Grimaldi Family purchased Monaco back from Aragon in 1612, and the head of the family, Honoré II, declared himself the Prince of Monaco.

Monaco wasn’t fully independent. While Prince was recognized as a sovereign prince by the French, they were also vassals to the French king.

They continued in this quasi-sovereign state until the onset of the French Revolution when Monaco was totally annexed by France.

For 21 years through the French Revolution and the Napoleonic era, Monaco was a part of France.

After the downfall of Napoleon, the Congress of Vienna reestablished Monaco as a sovereign entity as a protectorate of the Kingdom of Sardinia.

The real independence of Monaco came with the signing of the Franco-Monegasque Treaty of 1861. France recognized the existence of a sovereign Monaco and gave 4.1 million Francs and all Monaco had to do was give up 95% of its territory.  France also took responsibility for the defense of Monaco.

Monaco used to be much larger, although still pretty small in the big scheme of things. It extended all the way to the modern Italian border and included the current French cities of Menton and Roquebrune.

The treaty also set that if the House of Grimaldi did not have a male heir, then Monaco would return to France. This clause was subsequently removed in subsequent treaties.

The famous casino of Monte Carlo, which still exists today, opened in 1863.

In 1911, Monaco adopted a constitution taking away the absolute power of the Prince, although still giving him more power than most European monarchs.

In the second world war, it had the distinction of being invaded by the Italians in 1942, and then by the Germans in 1943 after the fall of Mussolini.

Most people after the war knew of Monaco for one thing and one thing only. Prince Ranier III took as his wife the Hollywood star Grace Kelly in 1956. She had already won an Academy Award by the age of 26 when she retired from filmmaking upon taking the position of Princess of Monaco.

In 1993, Monaco became a full member of the United Nations.

So, that explains how Monaco came to exist in the 21st century. They basically gave up 95% of the country in exchange for sovereignty.

But what about the country itself?

The biggest thing about Monaco is how small it is.

I’ve done several episodes on very small countries such as Tuvalu and Nauru, in addition to other European microstates. With the exception of Vatican City, which is really more of a legal fiction created to keep the papacy independent, Monaco is the smallest country in the world by area.

Of the 193 countries in the United Nations, Monaco is the smallest by a wide margin. Monaco is only 2.2 square kilometers in area. It is literally smaller than Central Park in New York City which has an area of 3.4 kilometers.

The next smallest country in the United Nations would be Nauru, with an area of 21 square kilometers, almost 10 times larger than Monaco.

I have literally walked across the entire country of Monaco. It took me about an hour and that was taking my time.

There is pretty much no available land in Monaco anymore, which is one reason why land values in the country are so astronomical. There is currently a land reclamation project underway which will try to create an additional 6 hectares for apartment buildings and shops.

Even though 37,000 people live in Monaco, most of them are not citizens of the country. There are only about 9,000 Monegasque citizens who live in the country.

And speaking of citizens of Monaco, the official language of Monaco is French, but the national language is called Monegasque. It is a dialect of Ligurian, which the form of Italian which is spoken in Genoa and the surrounding area.

The other significant thing about Monaco is that it has a lot of rich people. A full third of the country is millionaires. It has the highest per capita GDP of any country in the world at $190,000 per year.

The poverty rate in Monaco is officially zero.

With that much money, it also shouldn’t come as a surprise that Monaco is one of the safest countries in the world. The murder rate in Monaco is zero and there is one police officer for every 100 people who live in the country.

Also, Monaco has the highest life expectancy of any country at 85.6 years for men and 93.5 years for women.

The Monte Carlo Casino is probably the most famous casino in the world.

In 1913, it had a famous streak at a roulette table when black came up 26 times in a row. The odds of that happening were 1 in 67 million. The casino cleaned up with gamblers lost money continuously betting on red thinking that it was due.

Yes, you can go there and play baccarat like James Bond. However, you can’t place a bet at a casino in Monaco if you are a citizen, as it is illegal. Only foreigners can gamble.

Given the size of the country, there isn’t much in the way of sports, but the Monaco Grand-Prix is one of the most prestigious Formula One races in the world. In 2015, they also launched a Formula E race which is for electric vehicles.

I’ll end by nothing one other really odd thing about Monaco: their flag.

One of those countries has to change, and I’m sorry to say this Monaco, but it isn’t going to be the country with 270 million people.

If you have any desire to see Monaco yourself, it is pretty easy to do. If you happen to be in the south of France or northwest Italy, you can easily reach Monaco by train. There is no airport in Monaco, but you can fly into Nice in France which is only a 15-minute train ride.

If you do visit, take an hour and use to opportunity to say you literally walked from one end of the country to the other.