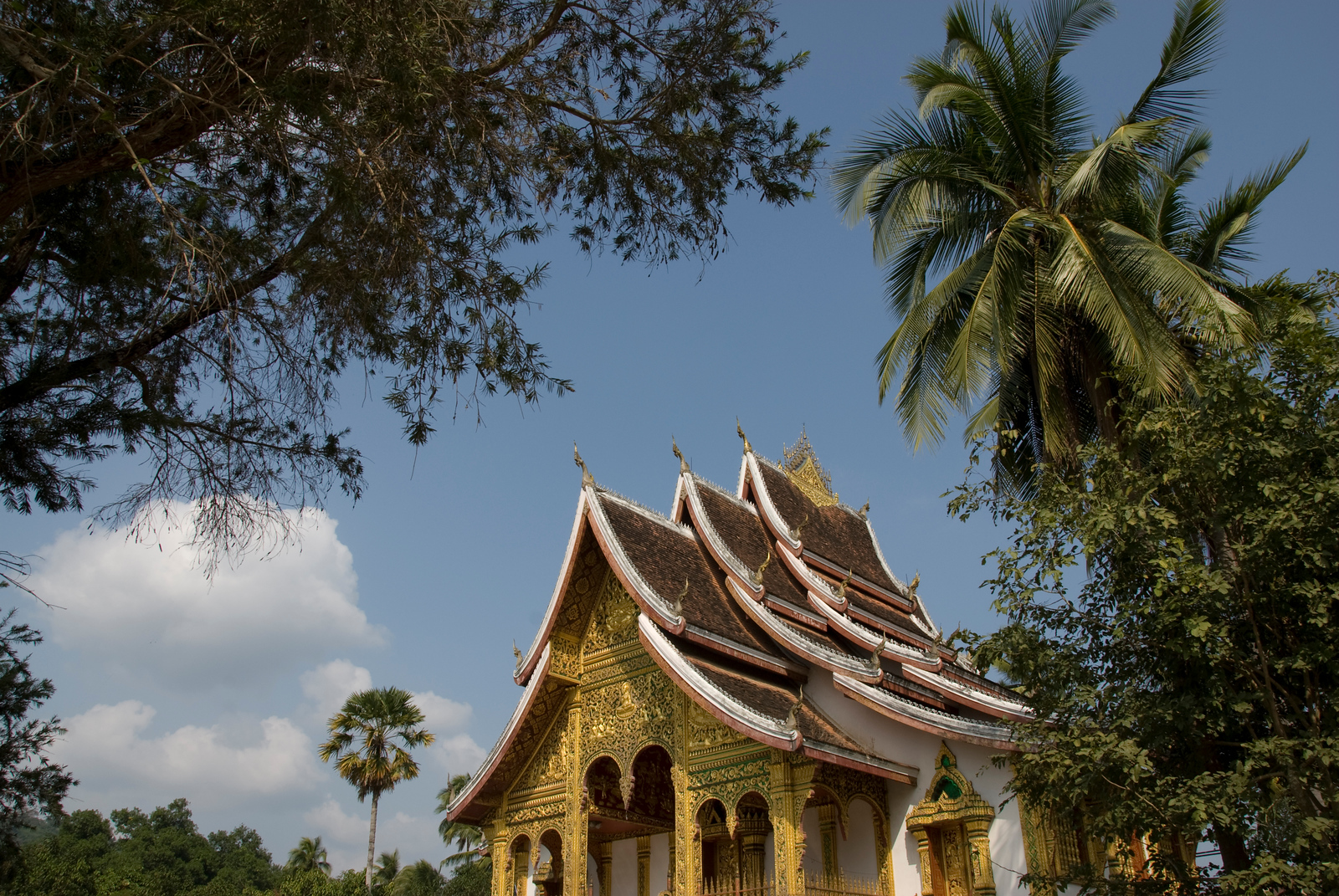 Prior to the communist takeover in Laos, Luang Prabang was the royal capital of the country. These days, it’s a sleepy town (well, all of Laos is pretty sleepy) on the Mekong River that has become a popular attraction on the tourist and backpacker circuit in Southeast Asia precisely because of that sleepy charm and beauty.

In addition to the European style colonial buildings, there are also several Buddhist temples in the area, each aspect contributing to Luang Prabang’s fascinating history, charm, and beauty. For such a small town (and it’s a lot smaller than top cities in nearby Thailand or Vietnam), the city has a lot to offer casual travelers, hikers, history buffs, and so many other types of travelers.

No matter the type things you’re planning to do while in Laos, you can bet that Luang Prabang has a scaled-down and local alternative to mass tourism you find in nearby countries.

Luang Prabang is an ancient town located in north central Laos, a country sandwiched between China, Vietnam, Cambodia, Thailand, and Myanmar. Luang Prabang is located in the northern part of the country, and it was inscribed into the list of UNESCO World Heritage Sites in Laos in 1995.

Some would claim that Luang Prabang is one of the most charming and well-preserved towns in Southeast Asia—it’s a compelling argument. Luang Prabang consists of 34 Buddhist temples, as well as other beautiful Chinese and colonial architectural structures. This rich concoction of cultural and historical sites is set on a lush mountainous backdrop.

Meanwhile, the mighty Mekong River borders the western side of Luang Prabang. It also once served as an important transportation, recreational, and commercial link in this part of Asia.

From the World Heritage inscription for the Town of Luang Prabang:

Many legends are associated with the creation of the city, including one that recounts that Buddha would have smiled when he rested there during his travels, prophesying that it would one day be the site of a rich and powerful city. Known as Muang Sua, then Xieng Thong, from the 14th to the 16th century the town became the capital of the powerful kingdom of Lane Xang (Kingdom of a Million Elephants), whose wealth and influence were related to its strategic location on the Silk Route. The city was also the center of Buddhism in the region. Luang Prabang takes its name from a statue of Buddha, the Prabang, offered by Cambodia. …

Luang Prabang is exceptional for both its rich architectural and artistic heritage that reflects the fusion of Lao traditional urban architecture with that of the colonial era. Its remarkably well-preserved townscape reflects the alliance of these two distinct cultural traditions.

The town of Luang Prabang is also known as Louangphabang, but was later transliterated by Western Language to its current name. The name of the city literally means “Royal Buddha Image.” The area known as Luang Prabang consists of with 58 villages, of which 33 are included in the UNESCO listing.

UNESCO listed the charming and historic town of Luang Prabang for its remarkable preservation of architectural, cultural, and religious heritage. At the same time, it has also incorporated into its own culture various influences from the French colony and other invaders throughout its history. Luang Prabang was under the influence of the French colonizers from the 19th to the 20th century, and that history is felt during every moment you spend in the town.

For all the things that Luang Prabang is known for, it’s most noted for the collection of Buddhist temples and monasteries. It has become a tradition for the monks to walk through the streets of Luang Prabang every morning to collect alms—visiting the monks one morning is easily one of the top things to do in Luang Prabang.

During the reign of the Lan Xang Kingdom, the city also served as the ancient royal capital. However, the new capital, Vientiane, was named in 1545.

Despite that, the ancient town of Luang Prabang continues to be the destination of choice for tourists looking to experience Laos’ extensive natural beauty that blends well with the glistening temples and ruins of French architecture in the city. In fact, tourism among the primary economic sources for the town.

Also, to this day, this ancient capital remains as the center for Buddhist learning in Laos—meaning that even as the city gains renown with backpackers and travelers, monks from all over the region still flock to the city for its special place in the Buddhist culture of Southeast Asia.

Top Things to Do in Luang Prabang

Dine and Shop at the Night Market

The nightly handicraft market right on the main street in Luang Prabang is both incredible touristy and still completely lovely. Bartering with Locations is a very different experience than negotiations are markets in other nearby countries, so plan to buy a few souvenirs at the night market, even if just for the chance to talk to and interact with locals (while also supporting the local economy, which is a top way to responsibly travel in Southeast Asia). Then eat all the things that look tasty at the night buffets and street food market—start here and here for what to eat in Laos.

View the Daily Alms With Monks

One of the most interesting things you’ll see in Luang Prabang is the daily alms ceremony. Every morning at sunrise, monks from local temples line up and walk through the streets of the town to receive rice and food from locals. If you wake up early, you can buy sticky rice and fruit and line up to give something to the monks. This is a serious event and should be undertaken with respect—too many tourists make a spectacle out of what is a very beautiful religious practice for locals.

With a number of beautiful temples located right in the heart of the city, plan at least a day visiting the most important religious and cultural sites in Luang Prabang. For the best views of this temple-dotted landscape, climb Mount Phousi for sunset and take in the beautiful rivers, low-slung ancient architecture, and charm that is a day spent in this gorgeous spot in Southeast Asia. You

Swim in the Nearby Waterfalls

As charming as it is to spend days just relaxing and exploring the town center, plan at least a few day trips. The Kuang Si Waterfalls are the most popular day trip from Luang Prabang, and Tad Sae Waterfalls are a less-visited but equally stunning option. If it’s not the right season for swimming, head to the Pak Ou Caves to discover where retired Buddha statues go when they’re no longer used in homes and temples.

How to Get to Luang Prabang

Travel Fish’s guide to transportation in Laos is a great source of updated information in the region. Note that this entire region of the world is developing because of investments from China, so always check for updated information. One of those big changes? A high-speed rail from Bangkok to China that will stop in Laos—this is due to be completed in 2021 and will dramatically change the effort it takes to experience Laos’ charms.

Luang Prabang can be directly accessed by flights coming from other parts of Laos, or other cities in Asia, such as Bangkok, Chiang Mai, and Vientiane. The airport, Luang Prabang International Airport, is small though, so don’t expect anything direct from outside Southeast Asia.

By Bus or Motorbike

Meanwhile, many adventurous travelers and backpackers prefer to travel overland to and from Luang Prabang, so they can easily visit other hotspots in Northern Laos (including Vang Vieng, the Plain of Jars, the Bokeo Nature Reserve, and so many other areas).

Bus travel is slow but effective and you will use this to get anywhere outside of Luang Prabang, unless you’re an adventurous traveler undertaking a motorcycle journey, which is a popular way to explore the north. If you do this, it’s recommended to plan your trip during the dry season.

Another transportation option to get to Luang Prabang is via boat cruise through the Mekong River. There are boat services available via the Mekong on a regular basis. An average voyage along the Mekong River to the Thai border typically lasts two days.

3 thoughts on “Things to Do in Charming Luang Prabang, Laos”