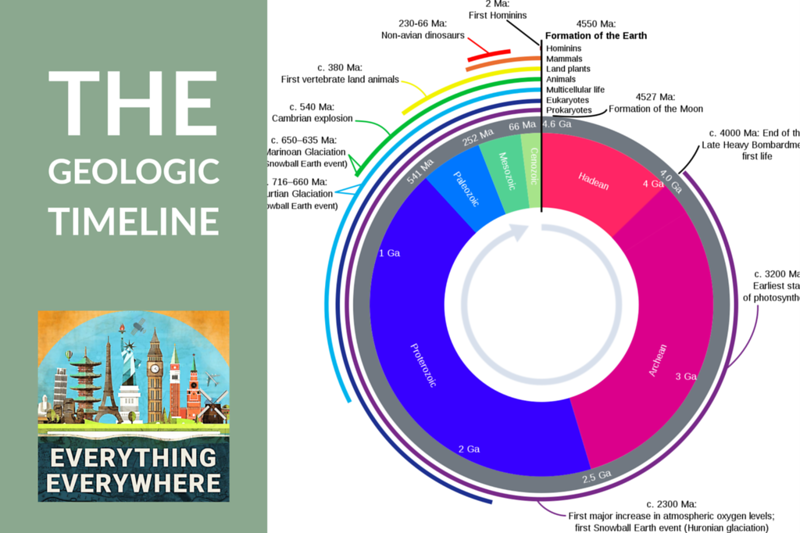 The Earth is pretty old. Our current, best estimate is that it is 4.54 billion years old, plus or minus 50 million years.

Since then, however, a lot has happened. To help clarify the Earth’s timeline, geologists have divided the Earth’s history into various eras and periods. Each division of time represents a change in something, which happened on the planet.

Learn more about the Earth’s history and geologic time scales, on this episode of Everything Everywhere Daily.

This episode is sponsored by the Tourist Office of Spain

A Parador is a luxury accommodation usually in a refurbished historic building, like a monastery or a castle, or in a modern building with a panoramic view.

There is an official network of over 90 Paradores scattered all over the country in every region.

In my many trips to Spain, I’ve stayed at several Paradores, and it is always a unique experience that adds an extra cultural element to every trip. I’ve stayed at ones in Guadalupe, Cáceres, and Costa Brava.

You can research visiting one of the many Paradores in Spain before your next visit by going to Spain.info.

Once again, that is Spain.info.

The Earth is so old, that to make sense of its history, geologists have come up with divisions. These divisions are very broad and cover millions to billions of years, depending on what the division is. Each division also has subdivisions that can themselves be further subdivided.

The three primary temporal divisions of Earth’s history are eons, eras, and periods.

There is also sometimes a fourth eon called the Hadean which would be from the formation of the Earth to 4 billion years ago, but it is really hard to study that period by itself, so it is often just lumped with the Archean.

I actually studied geology and geophysics for several years, and the use of eons seldom came up. Occasionally you would hear about the Archean, but the other eons are so broad as to not generally be useful.

The Archean is the period where continents started to form and the very simplest life began.

The Proterozoic is the eon where oxygen appeared, up to the beginning of complex multi-cellular life.

In the Archean and Proterozoic, there is little to nothing in the way of fossils, because there was nothing that could become fossilized yet. There are some fossilized stromatolite beds, which are mats of bacteria, but that is about it.

The rest of this episode will focus on the Phanerozoic Eon. That is where most geologic research is done, and where all the fossils are.

The Phanerozoic is divided up into three eras: the Paleozoic, the Mesozoic, and the Cenozoic.

The first period in the Paleozoic is one that you might have heard of: the Cambrian.

The Cambrian is noted for the sudden appearance of complex life forms and animals in the fossil record. This is known as the Cambrian Explosion.

Here is where you’ll see many of the trilobites which are very common fossils. In fact, the appearance of trilobites pretty much defines where the Cambrian appears in the geologic record.

All the complex life we know of in the Cambrian was in the sea. Nothing had come onto land yet.

It is noted for its continued biodiversification. Fish appeared during this period, and probably the first fish with jaws. These were the first vertebrate animals. There still wasn’t any animal life on land yet in the Ordovician that we know of.

There were lots of volcanoes, and meteors during this period as well. By some estimates, over 100x the number of meteor strikes that the Earth experiences today.

The Silurian sees the appears of the first vascular plants on land as well as the first arthropod-type land creatures.

I should also note that as we get closer to the present, the information we have becomes better. The divisions in time become more precise, and there are more subdivisions, most of which I will not be going into.

After the Silurian comes the Devonian which extended from 419.1 to 358.9 million years ago. If you were to travel back in time to the Devonian, you’d probably at least recognize the land as being Earth.

Life on land had an explosion in biodiversity. You would see actual forests and seed-bearing plants. This was also a heyday for fish and there was a large increase in fish species.

Ammonites, which are popular and common fossils, appeared here as well as the first tetrapods, which were animals with four legs. If you ever envisioned a fish walking onto dry land, it didn’t quite work like that, but it would have happened in the Devonian.

As the name would suggest, the Carboniferous period gets its name from carbon, in particular, many of the coal beds which are found in the world.

The most common land animal during this period were amphibians. You also find the first reptiles at the very end of the period. Insects also saw a radical increase in diversification, including species like a dragonfly with a 79 centimeter or 28-inch wingspan. The high oxygen levels allowed for such huge insects. They would literally be impossible today because insects don’t have lungs.

The Carboniferous period saw the highest oxygen levels in Earth’s history, reaching 35%. It also saw the formation of the supercontinent Pangaea.

At the end of the Carboniferous there occurred what is known as the Carboniferous rainforest collapse. This created most of the coal beds we know today, and it also created islands of life. Prior to the collapse, most land life was widespread over all of Pangaea.

The Permian saw the rise of Amniotes, or what is known as higher-level vertebrates. All mammals, reptiles, and birds belong to this class.

The thing which really defines the Permian is how it ended. The Permian-Triassic extinction was the largest mass extinction event in Earth’s history. 81% of all aquatic species died and 70% of all land species.

There is a very clear layer in the geologic record known as the P-T layer where on one side you can find Permian fossils, and on the other side, you can’t.

The Permian-Triassic extinction was believed to be caused by a massive volcanism event known as the Siberian Traps. Over a 2 million year period, it covered most of what is today central Siberia with basalt rock, and radically changed the atmosphere.

With the end of the Paleozoic, we now start to get into periods that you might be a bit more familiar with. The first of three periods of the Mesozoic is the Triassic.

The Triassic went from 252.1 to 201.3 million years ago. Life recovered from the Permian-Triassic extinction and the primary land life form that developed were called archosaurs. They can roughly be considered reptiles.

You also saw the first flying vertebrates called pterosaurs, and late in the Triassic, you saw the first animals we would call dinosaurs. There were also some of the very earliest ancestors of mammals.

During the Triassic, Pangea broke up into Laurasia in the north and Gondwana in the south.

After the Triassic, came the Jurassic, which I’m sure everyone is familiar with. The Jurassic went from 201.3 to 145.0 million years ago.

During the Jurassic, dinosaurs became the dominant animal on land.

However, I have to point out that most of the dinosaurs in Jurassic Park are not from the Jurassic period.

They are mostly from the next period, the Cretaceous. It is the last period in the Mesozoic and the longest. It lasted from 145.5 to 66.0 million years ago.

The late Jurassic and Cretaceous saw the period of the largest dinosaurs with species like the Tyrannosaurus.

This period was relatively warm with forests reaching all the way up to the polar regions.

The Cretaceous ended with a bang. Literally. The Cretaceous–Paleogene or Cretaceous-Tertiary extinction was another mass extinction. Unlike previous ones, this one was much more sudden.

The current theory which is now widely accepted is that the end of the Cretaceous came about with a meteor impact in what is today the Yucatan Peninsula of Mexico.

There is a very clear boundary in the rock layer where you see increased iridium, which is much more common in meteors than on the rest of the Earth.

It wiped out all of the large megafauna on land. After the extinction, there were no land animals weighing over 25 kilograms on Earth.

After this extinction, the current era, the Cenozoic began, and the first period was known as the Paleogene. It extended from 66.0 to 23 million years ago.

Mammals rose to prominence here. While they had always been around, they were rather minor. Now, they were able to dominate and diversify. You saw the rise of large mammals as well as aquatic mammals.

The one type of dinosaur which did survive was flying dinosaurs. They became what we call birds, and there was also a huge increase in bird diversity during this period as well.

The continents were moving into the places where they are today.

Temperatures overall cooled, but there were some periods with very warm temperatures along the way.

The next period was the Neogene which went from 23.03 to 2.588 million years ago. You’ll notice that the dates are getting far more precise as we get close to the present.

North and South American joined up during this period, and there was also considerable cooling. The late Neogene saw the beginning of the ice ages.

The poles also started developing ice caps during this period.

Many mammals that we would be familiar with, or at least very close relatives, appeared during this period.

The final period is the one we are in today, the Quaternary.

This extends from 2.588 million years ago to the present. This is basically the entire time that covers the period where we can point to species that were ancestors of humans. This period is probably best defined by the series of glaciations that occurred during this period.

I haven’t talked about epochs which are subdivisions of periods, but it is worth it for the Quaternary.

The early Quaternary is known as the Pleistocene. It went from 2.5 million years ago to 11,700 years ago.

The start of human agriculture also sort of corresponds with the beginning of the Holocene.

There won’t be a quiz at the end of this episode, so you don’t need to worry about knowing all of them, although I had to do exactly that when I was studying geology.

But I think it is helpful for everyone to have a rough idea of the Earth’s timeline.

This is just one of many things that I think a reasonably knowledgeable person should know off the top of their head. As I said, you don’t need to know everything on the timeline, but you should know where to stick the most important pins.

I want to get a big thank you to everyone who has supported the show over at Patreon and who has left a review on the various podcast sites. The show just keeps on growing

Podcasting is unlike anything else on the internet. There is no algorithm and there isn’t one company that controls everything. That means I can’t try to game the algorithm to grow my audience. I have to just try to put out a good show every day and hope that everyone who listens will tell their friends about it.

Remember, if you leave a review online, or if you ask me a question via email or social media, I’ll read it on the show.