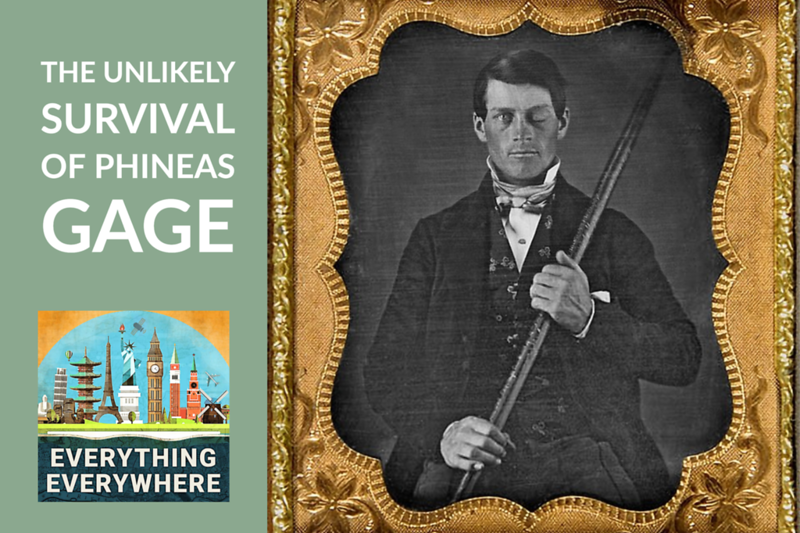 On September 13, 1848, a 25-year-old man named Phineas Gage received a horrific brain injury while working on a railroad in Vermont. The odds of anyone surviving such an accident were a million to one.

Yet, despite astronomical odds, he survived his injury and he became a case study for neuroscientists ever since.

Learn more about Phineas Gage and his incredible story, and how it helped us to understand the workings of the human brain, on this episode of Everything Everywhere Daily.

If you are interested in the working of the human mind, then CuriosityStream has a plethora of programs for you to enjoy.

They have shows like Brain Overload, Inside a Virtuoso’s Brain, the Curious Mind, and the Brain Factory.

They have many different shows to explain the different aspects of the workings of the brain and neuroscience.

Once again, that is Everything-Everywhere.com/CuriosityStream.

There is very little we know of the early life of Phineas Gage. To be perfectly honest, if it wasn’t for the event I’ll be discussing in this episode, Phineas Gage probably would have been unknown to history.

In 1823 he was born in New Hampshire and that is where he was raised.

He was of average height and weight, and we know that he was unusually healthy growing up. He was never sick and based on the single photo that remains, he was quite handsome.

At the age of 25, he had become a blasting foreman that worked for railroad companies. He and his crew were probably independent contractors who would work for various railroads in the region.

On the day in question, he was working for the Rut­land & Bur­ling­ton Rail­road near the town of Cavendish, Vermont. He and his crew were assigned to blast away some rock.

The process of blasting rock back in 1848 wasn’t without risk, but it was something that Phineas would have done many times before, and by all accounts, he was experienced and skilled at the task.

Basically, you would drill a hole into the rock with a hammer and an iron spike. Then, you would fill the hole with gunpowder, put some clay or sand in behind it, and very carefully tamp down the gunpowder and the sand.

Once everything in the hole was packed, you would light a fuse, get out of the way, and gunpowder would ignite, blasting away all of the rock around it. You then clear out the rubble and do it again.

Phineas had done this enough times that he had his own tamping rod built by a blacksmith. His rod was made out of solid iron, and it was about three feet seven inches or 1.1 meters long and 1 ¼ inches or 3.2 centimeters in diameter. Just to put that into perspective, the rod was about as thick as your index and middle finger together.

Also, one end of his tamping rod was flat, and the other end was pointed like a javelin.

On September 13, at approximately 4:30 pm, Phineas was tamping gunpowder into the hole.

The exact details are unclear, but as he was pushing the tamping rod down into the hole, he turned his head over his right shoulder and opened his mouth to speak.

At that exact moment, the gunpowder detonated. It is believed that someone had forgotten to put sand into the hole on top of the gunpowder and the tamping rod created a spark against the rock, igniting the explosion.

The tamping rod flew out of the hole like a bullet being fire out of a gun. In fact, that is exactly what it was, except with considerably more gunpowder than a bullet.

The pointed, javelin-shaped tamping rod hit Phineas just under his left cheekbone. It destroyed one of his molars, and went behind his left eye, and continued going through the left frontal lobe of his brain, before exiting through the top of his skull, near his hairline.

The metal rod landed 25 yards away and landed sticking straight up in the ground. Witnesses described the rod as being bloody and greasy from the fatty brain tissue it went through.

Just to put this into perspective, what went through his head was far, far larger than any bullet. Put two fingers up to your face just below your cheekbone and imagine a hole going through your head that size, let along a three-foot-long piece of iron going all the way through.

The astonishing thing was that Phineas Gage had survived. People just don’t have three-foot-long iron bars go through their head and survive, yet he had.

Not only did he survive, but he appeared to be conscious the entire time. He initially had some convulsions but was walking and talking within minutes of the accident.

His friends helped him to a cart which immediately took him the ¾ mile trip into town to find a doctor.

The doctor in town was Edward Williams. He met Phineas sitting outside of the hotel where he was staying. He recounted the meeting as follows:

When I drove up he said, “Doctor, here is business enough for you.” I first noticed the wound upon the head before I alighted from my carriage, the pulsations of the brain being very distinct. The top of the head appeared somewhat like an inverted funnel, as if some wedge-shaped body had passed from below upward. Mr. Gage, during the time I was examining this wound, was relating the manner in which he was injured to the bystanders. I did not believe Mr. Gage’s statement at that time, but thought he was deceived. Mr. Gage persisted in saying that the bar went through his head. Mr. G. got up and vomited; the effort of vomiting pressed out about half a teacupful of the brain [through the exit hole at the top of the skull], which fell upon the floor.

Over the next few days and weeks, his condition worsened. He slipped into a coma several times. The biggest threat was infection. His doctors had to constantly clean his wound and drain it of pus that had built up.

Everyone thought he would die and they had prepared his coffin and burial clothes for the eventuality.  However, Phineas didn’t die.

Within four years, he was considered to have been as completely recovered as possible for a man that had a large metal rod shot through his head. He had lost vision in his left eye and there was some paralysis in his face, but other than that, he appeared to be physically recovered.

However, not everything was the same.

So far, this is just a fascinating story of a guy who survived an incredible accident. What made this case something which people are still studying today is what people observed after.

Prior to the accident, Phineas Gage was considered a hard-working, responsible man that most everyone got along with.

However, immediately after the accident, his personality had changed completely. His memory and intellectual facilities did not seem to be impaired, but his personality was radically different.

His primary doctor, John Harlow wrote the following about his personality changes:

The equilibrium or balance, so to speak, between his intellectual faculties and animal pro­pen­si­ties, seems to have been destroyed. He is fitful, irreverent, indulging at times in the grossest profanity (which was not pre­vi­ous­ly his custom), manifesting but little deference for his fellows, impatient of restraint or advice when it conflicts with his desires, at times per­ti­na­cious­ly obstinate, yet capricious and vac­il­lat­ing, devising many plans of future operations, which are no sooner arranged than they are abandoned in turn for others appearing more feasible. A child in his intel­lec­tu­al capacity and man­i­fes­ta­tions, he has the animal passions of a strong man. Previous to his injury, although untrained in the schools, he possessed a well-balanced mind, and was looked upon by those who knew him as a shrewd, smart business man, very energetic and persistent in executing all his plans of operation. In this regard his mind was radically changed, so decidedly that his friends and acquaint­ances said he was “no longer Gage.”

A year after his accident, he was taken to Boston where he was examined at the Harvard University Medical School. The professors there had to verify for themselves his injury because it was such an incredible claim. The story of Phineas Gage had preceded him and almost everyone thought it was a hoax because surely no one could survive such an accident.

Gage became an almost impossible experiment for researchers showing the importance and role of the brain’s frontal lobe.

Of course, the case was also used by practitioners of phrenology to support their theories as well.

After a short stint of museum visits and a tour of towns in New England, Gage went back to work. In 1852, just four years after his accident, he left the United States to work as a stagecoach driver in Chile. He remained there for eight years.

During this time, he wasn’t observed by American doctors and much of what happened to him went undocumented. One of the biggest surprised is that most of his personality changes had vanished, and he mostly returned to normal.

This fact is usually overlooked by people who study Phineas Gage, and in some ways is even more remarkable than his initial personality change.

Eventually, he began to suffer severe epileptic seizures and he returned to the United States in 1860. He stayed with his mother in San Francisco where he died soon after returning at the age of 36.

His death was almost certainly linked to his accident, even though he had managed to live afterward for 12 years.

It is estimated that ? of introductory psychology textbooks mention Phineas Gage. Since his death, he has been mentioned in many books and studies. Complete 3D computer models of his skull and the path the metal rod took have been created.

His accident offered early medical researchers a glimpse into the workings of the human brain, even if his case has been interpreted many different ways by different researchers over the years.

Several years after his death, his family exhumed his body and donated his skull to the Harvard Medical School’s Warren Anatomical Museum. His skull and his iron tamping bar that he carried with him the rest of his life, are still on display today and are the museum’s most popular exhibits.

Today’s review comes from listener Mirxxx over at PodcastAddict. They write.

Thank you for igniting my curiosity. You are an excellent storyteller.

Thank you Mirxxx. I get a lot of suggestions from people on show ideas, and more often than not, they just give me facts or trivia. While each episode isn’t very long, there always has to be a story there beyond an interesting fact.