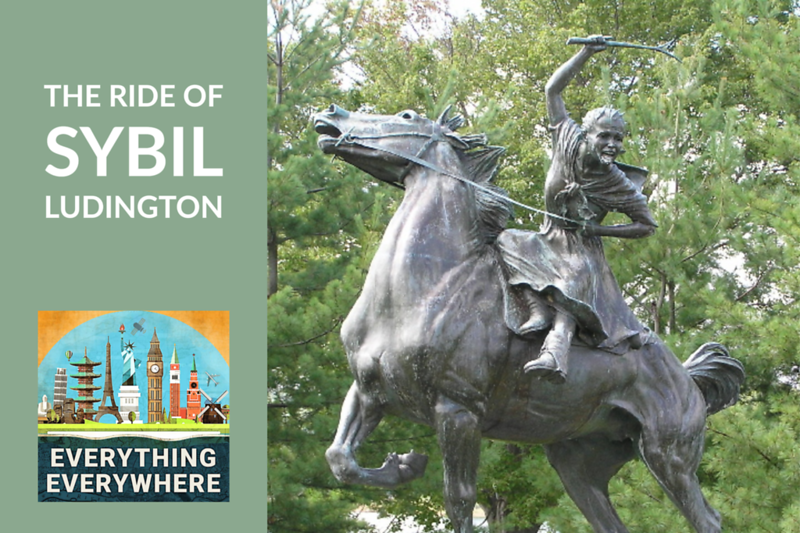 It is the American Revolutionary War. A rider on horseback sets out on an all-night ride to warn the militia of nearby towns that the British were coming.

I am of course talking about the ride of Paul Revere, right?

Nope. I’m talking about the ride of Sybil Luddington.

Learn more about Sybil Luddington and her role in the Revolutionary War, on this episode of Everything Everywhere Daily.

My audiobook recommendation today is The British Are Coming: The War for America, Lexington to Princeton, 1775-1777 by Rick Atkinson.

Pulitzer Prize-winning author Rick Atkinson turns his attention to the Revolutionary War, and in the initial volume of the Revolution Trilogy, he recounts the first 21 months of America’s violent war for independence. From the battles at Lexington and Concord in spring 1775 to those at Trenton and Princeton in winter 1777, American militiamen and then the ragged Continental Army take on the world’s most formidable fighting force.

It is a gripping saga alive with astonishing characters: Henry Knox, the former bookseller with an uncanny understanding of artillery; Nathanael Greene, the blue-eyed bumpkin who becomes a brilliant battle captain; Benjamin Franklin, the self-made man who proves to be the wiliest of diplomats; George Washington, the commander in chief who learns the difficult art of leadership when the war seems all but lost. The story is also told from the British perspective, making the mortal conflict between the redcoats and the rebels all the more compelling.

The story of Sybil Ludington was completely forgotten to history for over 100 years.

She was born in 1760 in Fredericksburg, New York. She was the oldest of 12 children born to Abigail Knowles and Henry Ludington. Her father was a mill owner and notable landowner in the area.

In addition to his commercial ventures, Henry Ludington also served in the military. He was a veteran of the Seven Year War where he achieved the rank of Captain.

In the Revolutionary War, he was promoted to colonel and was appointed as the aide-de-camp to General Washington and he was responsible for the largest spy network in the war.

After he died, in his will the land on which his mill was located became the basis of the town of Ludingtonville, New York, which still exists today.

I bring this up only to demonstrate that Sybil Ludington grew up in a fiercely patriotic family.

When the Revolutionary War began, Henry Luddington volunteered to lead the local militia. As a result, Sybil and her family had to move from place to place as camp followers.

Prior to her famous ride, she showed her bravery in the face of hostile forces. The American colonists were firmly divided between patriots who wished for independence and loyalists who wanted to remain part of Britain.

One of the local loyalists named Ichabod Prosser gathered a mob of 50 loyalists to came to capture her father one night.  Sybil organized her siblings to light candles and put them around the house, and then to march out in front like soldiers.

The mob couldn’t see that clearly and thought that the house was guarded by military men and went away.

The night in question that gave Sybil a place in history was on April 26, 1777.

Sybil had just turned 16 years old. On the evening in question, a rider came to their home to tell her father that the British had attacked and burned the town of Danbury, Connecticut. The Luddington house was located just south of Connecticut along the coast, across from Long Island.

British General William Tyron had come to destroy the arms and ammunition stockpile with 2,000 men.

Colonel Ludington had to assemble the 400 militia in the county to defend themselves from the British, The problem was, the militia had been disbanded for the winter and hadn’t yet reassembled.

The record isn’t clear on what happened next. Either Sybil volunteered or her father asked her, but either way, Sybil set out to warn the residents of the nearby towns and to assemble the militia.

She grabbed a stick and set out with her horse at 9 pm. With her stick she prodded the horse and used it to knock on the doors of all the houses she stopped at.

All evening she rode around Putnam County, warning the citizens and calling the militia to assemble. All night long she called out “The British are burning Danbury!”

Through the darkness of night, she rode 40 miles or 64 kilometers.  She took a circular route through the county visiting the towns of Carmel, Mahopac, Kent Cliffs, and Farmers Mills, before returning home.

Her ride wasn’t just long, it was dangerous. Not only were there loyalists in the region, but there were British troops and a local group of outlaws known as skinners.

Plus, it rained that night and she had to do most of the ride soaking wet.

When she arrived back home in the morning, she was exhausted and wet, but she had done her job. The militia was assembled and they were able to drive General Tyron back to Long Island Sound.

Sybil was congratulated by her neighbors in the area and by George Washington himself.

Just as a point of comparison, Sybil’s ride was three times longer than Paul Revere’s, she did it in the rain, and she did it during the war when there were actual enemies about. Paul Revere’s ride was done just before the war started, and there wasn’t any danger from enemies yet.

Sybil Ludington’s ride was mostly forgotten after the war.

Her story wasn’t put into print until 1880, 103 years after the ride took place.  A local historian named Martha Lamb wrote her story in a book about the local history of the area.

There was debate amongst historians as to the historical accuracy of the story. It is believed that the general story is true, but parts of it might be fictional. The primary documentation comes from a memoir written by Henry Ludington’s grandchildren which tells the story.

In the years since the story was published, Sybil Ludington has been lionized in several different forms.

In 1961, a bronze statue to her was erected in Carmel, New York.

In 1975, she was the subject of a commemorative stamp in the lead-up to the bicentennial.

The Sybil Ludington 50k Run is held every year in Carmel which roughly follows the route she supposedly took.

Best of all, in 1940, a take on the classic poem “Paul Revere’s Ride” by Henry Wadsworth Longfellow was written by Berton Bradley.

“Listen, my children, and you shall hear

Of a lovely feminine Paul Revere

Who rode an equally famous ride

Through a different part of the countryside,

A ride as daring as that of Paul’s”