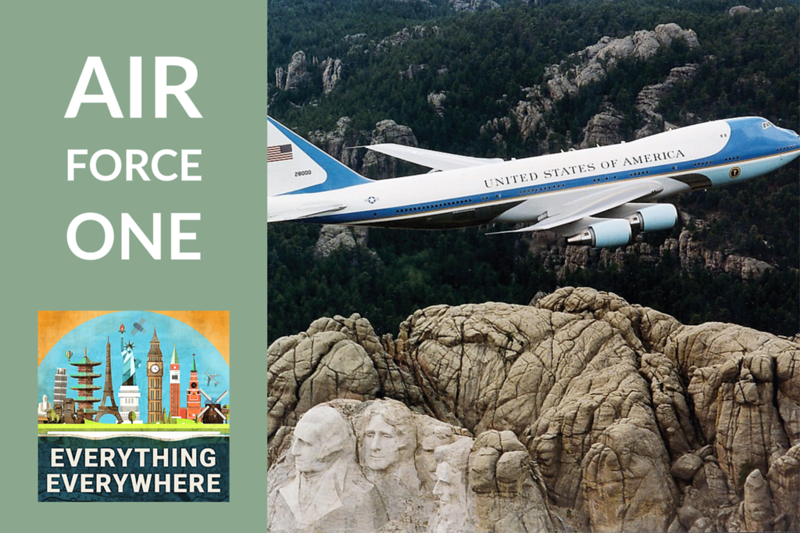 The era of presidential aviation began on October 11, 1910, when former president Theodore Roosevelt took to the skies in a Wright Brothers Flyer at a county fair in Saint Louis. The flight only lasted a few minutes.

Fast forward 110 years and the President of the United States has one of the sweetest rides on the planet.

Learn more about Air Force One, the airplanes which have served presidents, on this episode of Everything Everywhere Daily.

As I mentioned in the introduction, the first US president of any sort to fly in an airplane was Theodore Roosevelt.  It was a rather short flight as airplanes at that time didn’t have a very long-range, and it was probably one of the more dangerous flights ever attempted by a president, sitting or former.

However, after this short sightseeing flight, US presidents didn’t do any flying. It would be another 33 years before an actual sitting US president would get on an airplane.

The first airplane designated for presidential use was purchased in 1933. It was a Douglas Dolphin amphibious aircraft that was operated by the US Navy. There was no Air Force at this time. The code name it was given was RD-2.

It could seat four passengers and there was a small sleeping compartment. The interior was custom made for presidential use with leather seats. It was stationed at the Anacostia Naval Base in Washington DC until 1939.

During that time, it was never used once by the president.

To be fair, FDR was in a wheelchair, and getting in and out of an airplane, especially a small amphibious airplane, was probably something that he wasn’t keen to do.

However, he did eventually take a flight. The very first airplane flight by a sitting US president took place on January 11, 1943, when Franklin Roosevelt flew on the Dixie Clipper. It was a commercial Boeing 314 Clipper which was operated by PanAm.

He flew 5,500 miles to the Casablanca conference in Morocco to meet with Winston Churchill and Charles DeGaulle. The flight was done in three stages, and he flew rather than took a ship just because it was considered safer than risking German u-boats in the Atlantic.

After this trip, the Army Air Force didn’t want to rely on commercial airlines for presidential transport. They proposed the president use a modified C-87 Liberator Express heavy bomber. The plane was dubbed the Guess Where II.

However, when the Secret Service reviewed the safety record of the plane, they rejected it for presidential use. The plane was used for carrying the First Lady, Elenor Roosevelt on a trip to Latin America, but it never carried the president.

The Secret Service then approved a Douglas C-54 Skymaster, which was a transport plane used in the war. It was named the Sacred Cow, and it had sleeping quarters, a radiotelephone, and a lift for getting Roosevelt in and out of the plane in his wheelchair. The only time he used it was to travel to the Yalta Conference in February 1945.

This plane is on display at the museum at the Wright Patterson Air Force Base outside Dayton, Ohio.

The Sacred Cow was used in 1947 by President Truman to sign the bill which created the US Air Force.

Unlike modern presidential planes which are branded with the United States, this plane had the word Independence on the outside with a painted eagle head on the nose. It was really more Truman branding than America branding.

This was a much larger plane than previous ones and it could seat 24 people.

None of these aircraft were technically Air Force One, because that call sign didn’t exist yet.

That came about in 1953 when there was confusion with two aircraft in the sky, with similar call signs. Eastern Air Lines flight 8610 and Air Force flight 8610 crossed paths in the air while President Eisenhower was on board.

It caused confusion with air traffic controllers and so the Air Force decided to start informally calling whatever airplane the president was on Air Force One.

Here I should note that Air Force one doesn’t refer to any specific aircraft. Air Force One is officially the call sign for any aircraft that the sitting president happens to be on at that time.  If the president is flying in a homemade kit airplane, while that airplane is flying, it is known as Air Force One.

Colloquially, however, Air Force One is usually just referring to whatever government-owned aircraft is dedicated for presidential use.

Eisenhower had four different aircraft which were dedicated for presidential use. All of them were propeller aircraft.

Towards the end of the Eisenhower administration, Secretary of State John Foster Dulles noted that Soviet Premier Nikita Kruschev few in a jet-powered Tupolev Tu-114. He thought it looked bad for the President of the United States to be using backward technology.

So, the president entered the jet era.

Some of the Boeings were not yet delivered when President Kennedy took office. He and Mrs. Kenney hired industrial designer Raymond Loewy to redesign the interior of the incoming aircraft.

While working on this, they also redesigned the exterior of the plane. They selected a blue color and had the words the United States of America, prominently displayed on the exterior in a font known as Caslon.

This design with a polished aluminum bottom, white top, with a blue stripe, and text is the same basic design that every presidential aircraft has used for the last 60 years.

The aircraft delivered in 1962 was given the number SAM 26000. It was first used on November 10, 1962, to fly President Kenney to the funeral of former First Lady Elenor Roosevelt.

SAM 26000 was in use from 1962 to 1998 and severed every president from Kennedy to Clinton, although it wasn’t always the primary plane.

This plane was made famous for being the location of Lyndon Johnson’s inauguration, and it was also involved in a flyover during President Kennedy’s funeral, followed by 50 fighter jets. SAM 26000 is currently on display at the Wright Patterson Museum.

The SAM 27000 was dubbed the “Spirit of 76” by Richard Nixon and he had it painted on the nose. This was the plane that famously took President Nixon to China.

When Nixon resigned, his resignation took effect when he was in the air over Missouri. The pilot, Colonel Ralph Albertazzie, changed the call sign of the aircraft when the appointed time arrived by notifying Kansas City air traffic control that Air Force One was now SAM 27000 because the president was not on board.

During the tenure of President Ford, the plane was equipped with defensive systems for heat-seeking missiles, and he also was the first to start calling the plane itself Air Force One, not just the call sign.

Its last flight was on August 29, 2001, when it flew President Geroge W. Bush and his family to their ranch outside Waco, Texas.

SAM 27000 is now on display at the Ronald Reagan Presidential Library in California.

In 1990, the current president’s planes were brought into service. The Boeing VC-25 is a modified military version of a Boeing 747 and there are currently two of them. They have the codes SAM 28000 and SAM 29000.

These planes have capabilities that previous presidential aircraft lacked. They can be refueled in flight, which means they can basically fly indefinitely.

They have enough communications equipment on board to run the entire military from the air. After the attacks on September 11, they were upgraded such that the president can do a live broadcast onboard to the entire nation.

All of the writing abroad the aircraft are shielded to protect it from a nuclear electromagnetic pulse, and there is twice as much cable as what is normally found in a 747.

SAM 28000 and 29000 are probably the most sophisticated aircraft in the world from a communications perspective.

There is 4,000 square feet of space available on the plane, including a medical facility where surgeries can be performed if necessary.

As the current aircraft are over 30 years old, there is a search underway for a replacement. The current plan is to use a Boeing 747-8. When all of the customization required for a presidential aircraft is factored in, each plane is estimated to cost $4 billion dollars.

There are even plans for a supersonic Air Force One.

The planes are not just used for presidential use. The vice president or other cabinet officials can fly in them, and they don’t use the Air Force One call sign for those uses.

Any plane the Vice-President is on is known as Air Force Two. If it is carrying anyone else, it just goes by its SAM designation. On some special occasions, it will use a special call sign.

When a former president leaves office, tradition holds that the new president lets them fly home on Air Force One. The flight code is usually the number of the president. When Barak Obama left Washington, the flight was SAM 44. When the coffin of President Geroge HW Bush was flown back to Washington, it was given flight SAM 41.

I mentioned before that any plane with the sitting president on board is considered to be Air Force One. There have been a few cases where an aircraft other than one of the SAM designated aircraft was Air Force One.

There was a small propeller plane used to fly President Johnson to his ranch from the nearest air force base. That plane is now on display at the Johnson Ranch.

On December 26, 1973, Richard Nixon and his family flew on a commercial United flight, and that flight was Air Force One.

On March 8, 2000, President Clinton flew on an unmarked Gulfstream III that was not assigned Air Force One. There was another plane with it that had that call sign as a decoy as he was flying to Pakistan.

And of course, on May 1, 2003, President George W. Bush flew to the aircraft carrier USS Abraham Lincoln for his famous Mission Accomplished speech. He flew there on a Lockheed S-3 Viking.

At least one of the planes is always kept ready in the event that the president might need it, or to be evacuated.

I should also make note of the other presidential aircraft, Marine One.

Marine One is the call sign for any aircraft operated by the Marine Corps which carries the president, and it is almost always a helicopter.

The first use of a presidential helicopter was in 1957 when President Eisenhower wanted an easier way to get to his summer home in Pennsylvania.

The current use of presidential helicopters is mostly to transport the president from the White House to Air Force One at Joint Base Andrews.

Marine One always flies in a group with up to five other identical helicopters to sever as decoys.

The primary reason a helicopter is used rather than a car is that it doesn’t cause traffic delays.

Air Force One has been called the greatest job perk in the world, and that is probably true. However, it is also one of the most globally recognizable symbols of the American presidency.