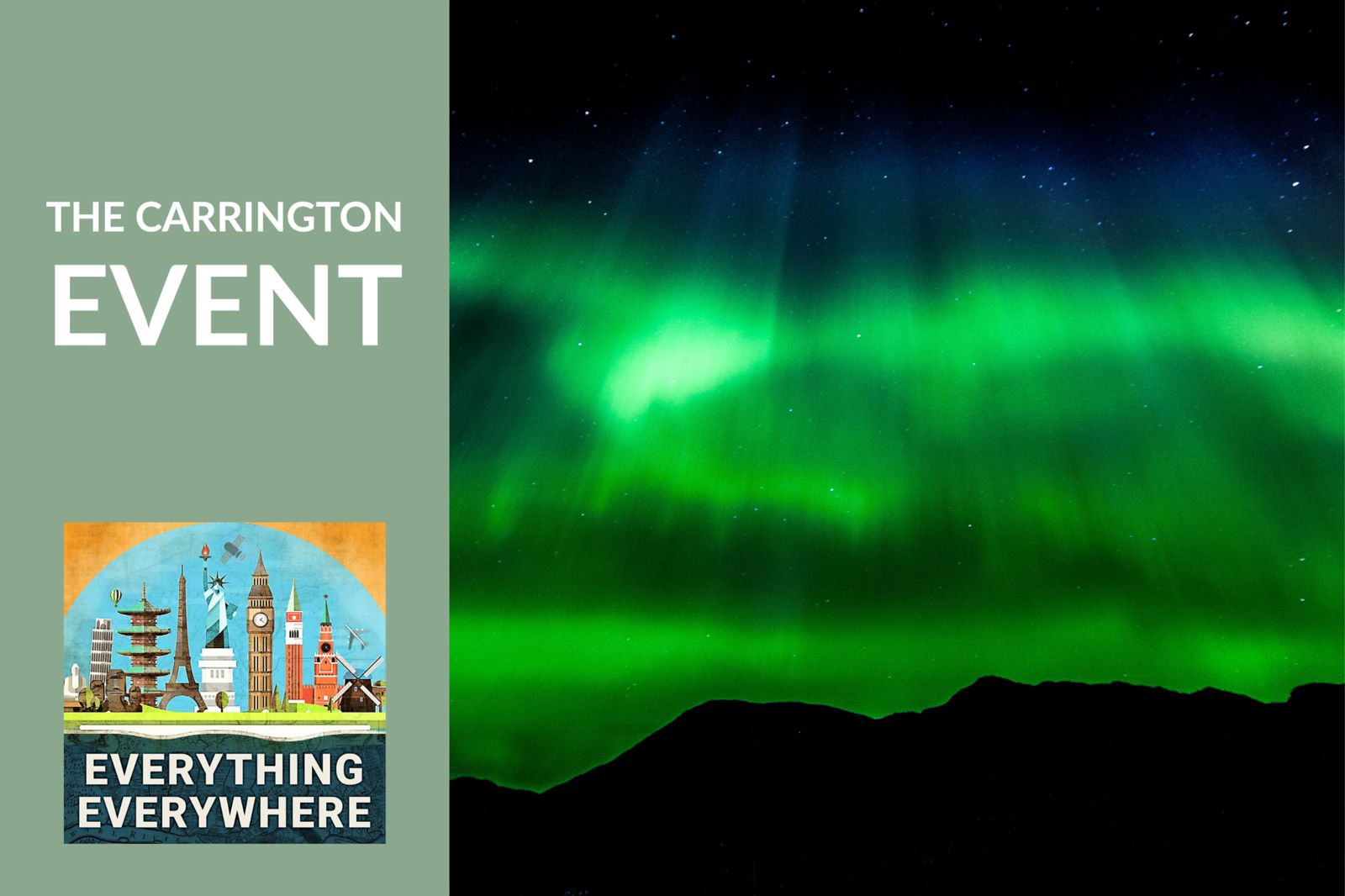 On September 1 and 2 of 1859, people all over the world were treated to something quite rare. Auroras were seen in the skies as far south as the Caribbean and as far north as Brisbane, Australia.

However, some astronomers and telegraph operators experienced something different.

If this same event were to happen today, it might bring out society to its knees.

Learn more about the Carrington Event and what it means for our modern world, on this episode of Everything Everywhere Daily.

If you are interested in the workings of the sun, then CuriosityStream has plenty of content for you.

They have shows like “Our Violent Sun”, “Eclipse: Science and Awe”, and “Touching the Sun” about NASA’s Parker solar probe.

That is just scratching the surface of the over 2,000 videos and documentaries you can find on almost any subject you are interested in.

You can get an entire year of CuriosityStream for less than $20. It is so cheap that you almost can’t afford to not get it. I am a paying customer and I regularly watch CuriositySteam to get ideas for episodes.

On the morning of September 1st, they were making observations of the sun. Solar astronomy was always a difficult thing to do at best because our eyes can’t handle looking directly at it, and looking at it through a telescope would make things even worse.

They were both working independently of each other when they observed something that up until that point no human had ever seen before.  Each astronomer later recorded their observations and had them published side by side in the Monthly Notices of the Royal Astronomical Society, that November.

Carrington described what he saw as “two patches of intensely bright and white light”. The two astronomers saw the first recorded solar flare in human history. Sunspots had been seen before, and very briefly during total solar eclipses people saw the corona of the sun, but no one had ever been able to see a solar flare, before.

What drove them to look at the sun was strange activity going on the days before their observation, starting on August 29th. Unusual aurora activity was taking place with auroras being seen much closer to the equator than usual.

About 18 hours after their observation, the Earth was hit by a massive geomagnetic storm. At the time, no one had any clue what that was or what was happening. What they did know is that things starting behaving very weirdly.

What most people noticed were the auroras. The previous few days had strong aurora activity, but it was nothing like what happened that night.

Auroras were seen in Jamaica, Cuba, and Hawaii. Over the Rocky Mountains, it was so bright that it woke up miners who thought it was dawn.

Birds work up and started chirping at 1 am.

The sky became a deep red in some places, leading some people to think that it was the end of the world, quoting the bible passage about the sea turning to blood. Some communities thought that nearby towns were on fire because of the color of the sky.

People in Boston claimed they were able to read the newspaper in the middle of the night from the light from the auroras.

The next day’s Baltimore American and Commercial Advertiser reported:

Those who happened to be out late on Thursday night had an opportunity of witnessing another magnificent display of the auroral lights. The phenomenon was very similar to the display on Sunday night, though at times the light was, if possible, more brilliant, and the prismatic hues more varied and gorgeous. The light appeared to cover the whole firmament, apparently like a luminous cloud, through which the stars of the larger magnitude indistinctly shone. The light was greater than that of the moon at its full, but had an indescribable softness and delicacy that seemed to envelop everything upon which it rested

There were a few people on Earth in 1859 who had the ability to detect something beyond just the auroras, however.

In London’s Kew Observatory, they had an early magnetometer set up which measured magnetic fields. They had observed a large magnetic disturbance on August 28 and another on September 2. Moreover, after the event took place, they were able to compare notes and they realized it took place only hours after the solar flare observed by Carrington.

Balfour Steward, the head of the observatory noted in his report:

On calling at Kew Observatory a day or two afterwards, Mr. Carrington learned that at the very moment when he had observed this phenomena the three magnetic elements at Kew were simultaneously disturbed. If no connexion had been known to subsist between these two classes of phenomena, it would, perhaps, be wrong to consider this in any other light than a casual coincidence; but since General Sabine has proved that a relation subsists between magnetic disturbances and sunspots, it is not impossible to suppose that in this case our luminary was taken “in the act”.

The people who really noticed that something was going on were telegraph operators.

All over North American and Europe telegraph systems went dead…which were really the only places on Earth that had telegraphs to any extent in 1859.

Not only didn’t they work, but there were huge electrical currents going through the wires. Some operators were injured. In Washington, D.C., telegraph operator Frederick W. Royce had an electrical arc go from his equipment to his forehead. Some stations had their chemically treated telegraph paper burst into flame.

Sparks were reported shooting from equipment everywhere. In Boston, they found that they could actually send a signal to Portland, Maine….without their battery hooked up because there was so much current in the wires.

That was something that wasn’t supposed to happen.

Eventually, over the next day, things returned to normal.

While scientists quickly began to piece together what had happened, it would be decades before they really know what caused the events of 1859.

We now know that what happened was that the Earth was hit with a massive coronal mass ejection. They are not the same thing as a solar flare, but they are usually associated with them.

What astronomers think is happening is that the magnetic fields on the sun become twisted up. As they become more twisted, it eventually violently breaks, ejecting an enormous amount of plasma matter into space. This matter is all in the form of subatomic particles.

If the ejection hits the Earth’s magnetic field, it causes what is known as a geomagnetic storm.

The results include spectacular auroras in the sky, and absolute havoc wreaked on electronics.

If you remember from science class, if you move a wire in a magnetic field, you produce an electrical current. Or, you can get the same effect by moving a magnetic field around a static wire, which is exactly what happened to the telegraph cables in 1859.

The geomagnetic storm of 1859 wasn’t the only time this has happened in recent history, although it was the biggest. Other, smaller events occurred in November 1882, and May 1921.

In 1967 a solar event knocked out polar surveillance radars which caused the military to scramble to prepare for a nuclear attack.

In 1972, the US Navy had magnetic mines off the coast of Vietnam detonate due to a storm.

In March of 1989, in what was perhaps the largest geomagnetic storm since the Carrington Event, the entire province of Quebec had a power failure for nine hours.

A Carrington level event occurred in 2012, but it missed the Earth by nine days.

As it stands, another Carrington-type event has the potential to totally cripple the modern world. In 1859, the only wires we had were telegraph wires. Today, we have wires everywhere for computers and electricity.

It would be a giant worldwide power surge that could take down most satellites, electrical grids, and communications networks.  On the electrical grid, it could blow out transformers almost everywhere, and it would take years to build back the grid after something this massive.

This isn’t something like a meteor hitting the Earth where we have plenty of advance notice and we can send up a rocket with Bruce Willis to blow it up. There is nothing you can do to stop a coronal mass ejection.

So, what can we do about it?

The good news is that there is usually some lead time between when a large solar flare is observed and when the particles hit the Earth. You usually have about 3 to 5 days, because the particles don’t travel at the speed of light. However, with the Carrington Event, it only took 18 hours.

With that lead time, it would give the institutions running power grids and communication networks time to put a plan of action into place.  This is assuming of course that they have a plan, which most don’t at this point.

It would involve voluntary shutting down of the grid and networks so the power surge doesn’t blow out transformers. That means everyone would be in the dark for maybe a few days, to avoid being in the dark for months or years.

There are some parts of our infrastructure right now which really have no protection whatsoever. Undersea fiber-optic cables don’t have to worry about a power surge, but the repeaters which are spaced out every few kilometers are vulnerable.

Likewise, almost everything in orbit would be at risk of failure including the entire GPS system.

Most small electronics and small networks probably won’t be in much danger, but you would still probably want to unplug everything from wall outlets…and if you remember back to my episode on microwave ovens,  the inside of microwaves are a faraday cage.

A 2013 study taken after the 2012 coronal mass ejection that just missed the Earth, estimated that the damage in just the United States alone could be in the trillions of dollars of damage.

Estimates based on ice core samples from Greenland indicate that a Carrington level event hits the Earth once every 500 years. However, up until now geomagnetic storms really didn’t matter because, without electronics, the only effect was stunning auroras.

Whenever it happens, however, the aftermath of the geomagnetic storm will depend on what we do now to prepare for that day.

The associate produce of Everything Everywhere Daily is Thor Thomson.

Today’s review comes from listener LDMartin1959 at Apple Podcasts in the United States. They write:

Those old enough to remember Paul Harvey’s, “The Rest of the Story” will find this show familiar, as it has much the same approach as that classic show. Highly recommended.

Thank you very much LDMartin. That is quite the compliment. If I could get this show to even one percent of what Paul Harvey did, I’d consider it a success.

Remember, if you leave a review or send me a question, you too can have it read on the the show.