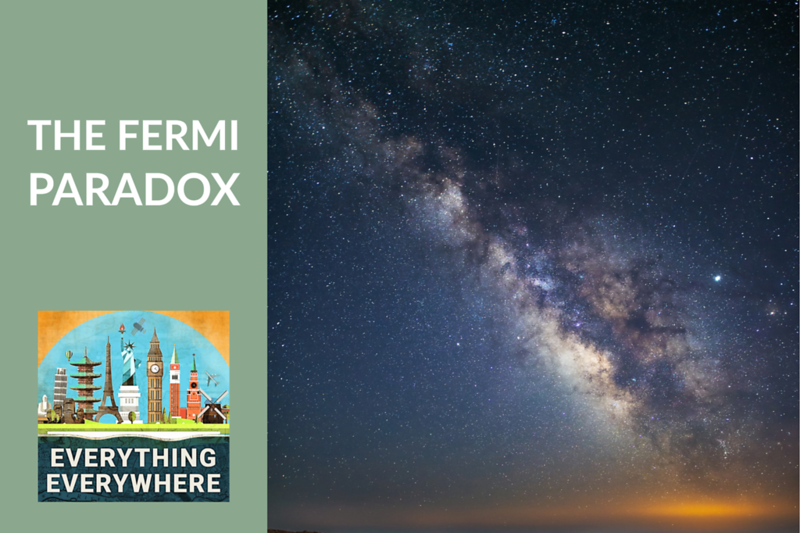 However, in the summer of 1950, physicist Enrico Fermi pushed back against this by asking a very simple question: if there are so many intelligent civilizations, where are they?

Learn more about the Fermi Paradox and some possible answers to the question, on this episode of Everything Everywhere Daily.

If you’ve ever watched a science fiction movie, you know the one thing that aliens never have? Pockets.

Yeah. Think about it. You never see aliens with pockets.

In fact, you never see pockets through much of human history either. Otzi the Iceman. 5300 years old and no pockets. Roman Togas. No Pockets.

In fact, you didn’t really see pockets as we know them today until the 18th century.

That means pockets are one of the things which make us modern humans.

If you want to flaunt being a contemporary human with pockets, there is no better way to do that than with Scottevest gear. Scottevest has gear to hold everything you need including your smartphone, cables, glasses, and water bottles.

The first thing you should know about the Fermi Paradox is that Fermi wasn’t the first person to ask the question, and it isn’t really a paradox.

A paradox is a statement that is self-contradictory. For example, if I said, “This statement is false”, that would be a paradox.

The Fermi Paradox is really just an unanswered question.

Likewise, the association with Enrico Fermi came from an informal conversation he had in the summer of 1950 at Los Alamos Labs in New Mexico. According to legend, he was having lunch with physicists Emil Konopinski, Edward Teller, and Herbert York, when the subject of a cartoon in the New Yorker Magazine came up.

The cartoon showed aliens coming out of a flying saucer carrying garbage cans. Fermi simply blurted out, “Where is everybody?”

Everyone present had a slightly differing account, but they all recall laughing at the way he said it.

The first use of the phrase “Fermi Paradox” occurred in 1977 in a paper written by physicist David G. Stephenson.

One of the earliest discussions of the question of where are the aliens was made by Russian rocket scientist Konstantin Tsiolkovsky in 1933.

However, because everyone calls it the Fermi Paradox, that is what I’m going to stick with it, and use for the rest of this episode.

With that in mind, what are some possible answers to the Fermi Paradox?

To quickly recap the Drake Equation episode, there are hundreds of billions of stars in just our galaxy and possibly 300 sextillion in the observable universe. Based on our current knowledge of exoplanets, each star probably has many planets orbiting around it, and many of those planets might have moons.

If aliens do exist, then the math suggests they should be here by now.

For example, let’s assume we built a big ship to take colonists to the star closest to our solar system, Proxima Century, which is 4.2 lightyears away.

Perhaps the journey takes a century or two. Once they arrive, they take a few hundred of years to grow their population and create a civilization, and then they do the same thing.

Even at this relatively slow rate of colonization using something near our current levels of technology, the entire galaxy could be colonized by a single species in 5 to 50 million years.

That might sound like a long time, but on geological or cosmological time scales, it is nothing.

So based on these assumptions, we should have been visited or at least seen evidence of aliens by now.

So, what explains this discrepancy?

There are a whole lot of answers which people have put forward. None of them can be proven right or wrong, they are all just speculation.

Here are some of the common theories that attempt to resolve the paradox.

The first is that interstellar space flight just might not be possible. One of the reasons we think it is possible is because it is a cornerstone to much of our science fiction. However, in all of those cases, it involves some magical technical advancement like wormholes, warp drive, or faster than light travel.

The true answer might be that the distances are just too vast, and we are just stuck here on our planet.

Another theory, which was more popular during the cold war, was that advanced civilizations will destroy themselves before they can get to a point where they can communicate with anyone else.

Perhaps they have some sort of cataclysmic war, exhaust their resources, or their star goes extinct.

One of the assumptions which is often used is called the mediocrity principle. This assumes that, without any other knowledge, statistically the Earth must be an average planet.

The Rare Earth hypothesis suggests that might not be true, and that our planet might be very unusual.

The Rare Earth holds that simple life might very well be abundant in the universe. If we were to find evidence of simple life on Mars or another world, this would lend credibility to this view. However, a series of events had to take place to create humans.

As evolutionary biologist Stephen Jay Gould suggested, if you rolled back the tape of life and reran it, there is a good chance humans wouldn’t exist.

Then something happened which allowed for the rise of complex, multicellular life, and whatever that was, most other planets never go through it.

A more generalized version of this is called the Great Filter. The Great Filter suggests that there is something that holds most planets or civilizations back. It could be the creation of complex life as the Rare Earth hypothesis suggests, or it could be something in our future that we haven’t yet figured out.

If there is a filter, we don’t know if it is behind us or in front of us.

A good example of this would be from Star Trek. Once humans figured out warp drive, we were contacted by Vulcans. Prior to that, it wasn’t worth their time to get in touch with a pre-warp civilization.

There might be a technology we aren’t even aware of yet that we haven’t discovered. In other words, we can’t phone ET, until we discover the interstellar telephone.

Other explanations are much more simple.

One is that aliens have been here, but we weren’t around to greet them. They might have come millions of years ago, and might not be back again for millions more. This was sort of the basis for Arthur C. Clarke’s 2001: A Space Odyssey.

Another is that we are first. The reason why no one has shown up to the party is that we were the first ones to arrive. This seems improbably given what we known of cosmic timescales, but we can’t rule it out.

Another theory is that we haven’t been looking long enough or in the right places. Our ability to travel into space and do advanced astronomy is actually pretty short. Maybe we just need to look harder.

Yet another holds that maybe everyone is like us. They are all listening, but no one is broadcasting.

Finally, some theories border on the conspiratorial. Maybe we are an intergalactic zoo or wildlife preserve and no one is allowed to contact us, or maybe the aliens are here already and we are secretly ruled by lizard people…..and that is an actual thing that people believe.

There is almost no limit to the number of theoretical answers to the Fermi Paradox. You can probably invent your own, and there would be no way to disprove whatever you come up with.

However, what did Enrico Fermi think the answer to the question was?

Herbert York who was at the infamous luncheon recalled later, “… he went on to conclude that the reason that we hadn’t been visited might be that interstellar flight is impossible, or, if it is possible, always judged to be not worth the effort or technological civilization doesn’t last long enough for it to happen.”

So, your guess to the resolution to the Fermi Paradox is just as good as anyone else’s, and there is a good chance that we will never know….unless of course aliens land on the front lawn of the White House, in which case, our first question should be, “what took you so long?”