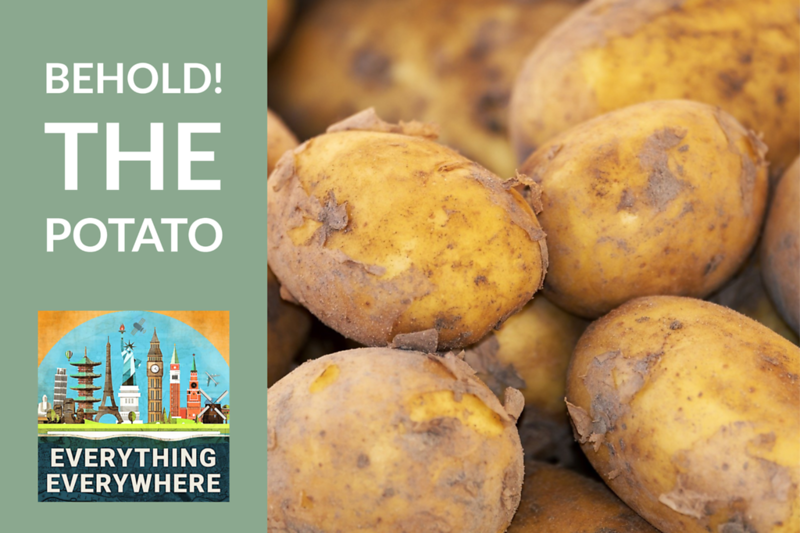 What did the first Chinese Emperor Qin, Julius Caesar, Alexander the Great, Gengis Kahn, the Queen of Sheba, and all their contemporaries who lived when they did have in common?

None of them ever ate a potato.

The potato is a rather new addition to the diets of the old world, and one which revolutionized civilization.

Learn more about the potato and how changed world history, on this episode of Everything Everywhere Daily.

Today’s audiobook recommendation is The Untold History of the Potato by John Reader.

The potato – humble, lumpy, bland, familiar – is a decidedly unglamorous staple of the dinner table. Or is it?. From domestication in Peru 8,000 years ago to its status today as the world’s fourth largest food crop, the potato has played a starring – or at least supporting – role in many chapters of human history.

Whether embraced as the solution to hunger or wielded as a weapon of exploitation, blamed for famine and death or recognized for spurring progress, the potato has often changed the course of human events.

Where potatoes have been adopted as a staple food, social change has always followed. It may be “just” a humble vegetable, John Reader shows, yet the history of the potato has been anything but dull.

It is remarkable how many foods that we eat today, all around the world, simply didn’t exist in the old world of Africa, Asia, and Europe.

Corn, chocolate, vanilla, peppers, green beans, pumpkins, tomatoes, and squash are all foods that were completely unknown to the people of the old world.

Perhaps the most important new world food, however, was the humble potato.

The potato was originally native to South America. It was first domesticated in Peru anywhere from 5,000 to 10,000 years ago. It is really hard to tell because potatoes aren’t very well preserved in the archeological record, but we know they were being grown probably when cities were first being built in Mesopotamia.

Specifically, they were probably first domesticated around the area of Lake Titicaca, high in the Andes Mountains.

The first confirmed evidence in the archeological record comes from the year 2500 BC near the coastal city of Ancón, just north of Lima, Peru.

The potato was the primary foodstuff for the Incan empire.

Potatoes cooked by ancient Peruvians were not too dissimilar to how they are cooked today. They were baked or boiled and might have been mashed. Potatoes pretty much have to be cooked in order for the starches in them to be digestible by humans.

Some potato varieties had toxic compounds that required soaking in clay and water to leech out the toxic substances.

One popular way of processing potatoes was to make chuño. This involved repeatedly leaving them outside to freeze, then thawing them the next day. This freeze-drying would go on for three to five nights, then they would be laid out and stomped on to remove any remaining water.

The result would be a white rock-looking thing, not too dissimilar from a peeled potato, but it because it was dehydrated, it could last for years.

Potatoes had been domesticated all the way down the Andes to southern Patagonia in what is today Chile, prior to the arrival of Europeans.

The first Spanish explorers to the region, led by Pizarro in 1532, recognized the value of the potato, but when they brought them back to Europe, it was mostly for the consumption of the South American people they brought back with them.

Supposedly, and I know they because I actually paid a visit, the first place in Europe to grow potatoes was the garden at the monastery in Guadalupe, Spain. It was a place that Queen Isabella visited frequently.

The first potatoes brought to Europe didn’t grow very well. They weren’t accustomed to the large changes in daylight at high latitudes, and they wouldn’t really start growing until the autumn just before frosts would come and kill them.

Throughout the 17the century, potatoes really didn’t catch on in Europe. There were all sorts of myths about potatoes that prevented their widescale adoption. Some people thought they were poisonous and some thought they caused leprosy. It was called the Devil’s Apple because it grew underground.

In 18th Century England, potatoes Spanish connection linked it to Catholicism and in the 1765 parliamentary elections, one of the slogans was  “No Potatoes, No Popery!”

Eventually, various places in Europe were forced to adopt the potato, usually to fend off famine. Also, after two centuries of selective breeding in Europe, there were varietals that were acclimated to European growing conditions.

In 1744, King Frederick the Great of Prussia ordered peasants to grow potatoes. Prussia was the first continental European country to really embrace the potato.

Its expansion from Prussia occurred in a very odd way. During the Seven Year War between Prussia and France, a French pharmacist by the name of Antoine-Augustin Parmentier was captured by the Prussians five-time.

During his prison stints, he was mostly fed a diet of potatoes and he came out of prison in surprisingly good health. When the war ended in 1763 he dedicated himself to spreading the gospel of the potato.

If you remember back to my earlier episode on french fries, Parmentier employed every marketing trick he could think of to get people to eat potatoes.

He held potato-themed banquets for the aristocracy in Paris. He got the king and queen to wear potato flowers. He even planted a forty-acre plot of potatoes on the edge of Paris with armed guards. The guards were there just to signal to the peasants that the crop was valuable. The guards were given instructions to look the other way if anything was stolen and to accept any bribes offered to them.

The timing was also good as the Little Ice Age was affecting crops at this time, and France had also lifted price controls on grain, which caused the price of bread to skyrocket.

Eventually, peasants all over Europe abandoned the myths about potatoes and embraced it as a crop. Not only was the plant not poisonous, but it was also in fact probably the greatest thing they could be growing.

It turned out potatoes had huge benefits over growing wheat.

For starters, potatoes could produce three times the number of calories per acre compared to grain. A single acre of potatoes and a cow were enough to feed a family of six to eight people in Ireland, which was something that was impossible with grain.

Secondly, they stored well. You could just put them in a cellar and they could keep them for an entire winter. Potatoes didn’t have to be processed and milled as wheat did.

Third, they could grow in a far greater range of climates than wheat could, and because they grew underground, they were less susceptible to damage from rain, heat, and frost.

Fourth, potatoes have a far better nutrient profile than grain does, which meant that many diseases like scurvy which were the result of nutrient deficiencies disappeared.

Finally, they were easier to hide from tax collectors. It is hard to hide the amount of wheat you are growing because it is all above ground. Potatoes, however, were all below ground. Likewise, if a foreign army came through, they usually wouldn’t bother digging up potatoes, but they might burn a wheat field.

This late 18th and early 19th-century potato revolution radically changed Europe if for no other reason than it provided the calories for rapid growth in population. Also, because it was a more hardy crop that stored well, it dramatically reduced hunger and famine.

I mentioned that Prussia was the first place in continental Europe to embrace the potato, which is true, but they weren’t the first overall. That distinction belonged to Ireland. Potatoes grew great in Ireland and that was where many of the first varietals were developed that later became popular in Europe.

Ireland was more dependent on potatoes than any other country in the world. An estimated 40% of the people in Ireland ate no solid food other than potatoes and potatoes provided 80% of all calories consumed in the country. Well above that found in other European countries.

As great as potatoes were, Ireland’s reliance on a single crop made them extremely vulnerable. Beginning in 1845, the country was struck by a potato blight which devastated the potato crops. In 1845 half of the harvest was destroyed, and three-quarters of the crop was destroyed the next 7 years.

During the great famine, over a million Irish died and a million more migrated abroad, mostly to the United States.

While Europe was a major beneficiary of the potato, the potato spread well beyond. The potato is truly a global foodstuff.

European traders brought them to China in the 1600s where they became a delicacy of the Imperial family.

Portuguese and then British merchants brought them to India, where they were uniquely suited to the diverse climates of the country.

Likewise, in Africa, there are many countries where potatoes are the single largest crop, mostly grown by self-sufficient farmers. In the highlands of Rwanda, potato consumption is amongst the highest in the world.

There are over 5,000 varieties of potatoes have been identified and protected at The International Potato Center in Peru. The majority of them have come from home gardens in the Andes Mountains.

By comparison, the United States only produced 20 million tonnes.

In all my travels around the world, I found potatoes to be the most universal food that I encountered. Almost everywhere I went, I could find some sort of potato dish and in most cases, it wasn’t even considered a foreign dish.

So, the potato is an insanely important crop. It has played a pivotal role in keeping famine and malnutrition at bay around the world. The next time you order fries, chips, or frites, take a moment to give some respect to the important role played by the humble potato.