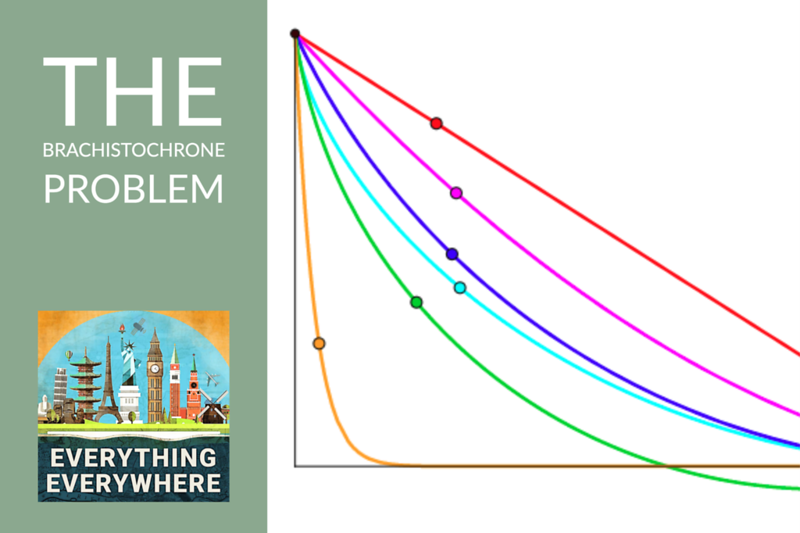 In 1696, the mathematician Johann Bernoulli posited a very simple question. Assuming no friction, what was the fastest shape for an object to slide down to go from point A to point B?

That simple question stumped some of the world’s greatest mathematicians.

The answer to that question isn’t what you think it might be, and it has some very interesting implications.

This entire episode stemmed from a single question published in a scientific journal over 300 years ago.

Johann Bernoulli, a member of the mathematically accomplished Bernoulli family of Switzerland, posted a question to the scientific journal Acta Eruditorum in June of 1696.

His entire submission was as follows:

I, Johann Bernoulli, address the most brilliant mathematicians in the world. Nothing is more attractive to intelligent people than an honest, challenging problem, whose possible solution will bestow fame and remain as a lasting monument. Following the example set by Pascal, Fermat, etc., I hope to gain the gratitude of the whole scientific community by placing before the finest mathematicians of our time a problem which will test their methods and the strength of their intellect. If someone communicates to me the solution of the proposed problem, I shall publicly declare him worthy of praise.

The problem he stated was as follows:

Given two points A and B in a vertical plane, what is the curve traced out by a point acted on only by gravity, which starts at A and reaches B in the shortest time.

The problem was dubbed the Brachistochrone Problem.

If you haven’t heard the term Brachistochrone before, I wouldn’t worry too much about it. Even though I got an undergraduate degree in mathematics, I never recall coming across this problem or this word at any point during my courses.

The word Brachistochrone comes from the Greek words brákhistos khrónos which means the ‘shortest time’.

The problem is pretty simple. If you had a slide, what shape of the slide would get you to the bottom the fastest?

Bernoulli had come up with his own solution to the problem.

He had hoped that the other great mathematicians of Europe would send him an answer within six months. Remember, this was the 17th century and information traveled slowly.

After six months, no submissions were received.

Gottfried Leibniz, one of the co-inventors of calculus, requested an extension to submit a solution, so Bernoulli extended the deadline an additional 18 months.

By the end of the deadline, he had received five solutions to his problem. The solutions were sent in by his brother Jakob Bernoulli, Gottfried Leibniz, Ehrenfried Walther von Tschirnhaus, Guillaume de l’Hôpital, and a guy by the name of Isaac Newton.

This problem, in a microcosm, sort of shows the brilliance of Newton.

Newton never saw the original question as posted in the journal. He learned of it via a personal letter sent from Bernoulli which he received on January 29, 1697, when he came home from work at the Royal Mint, which he was in charge of.

Newton, sort of annoyed at getting sent the problem via a letter, stayed up that night solving it and sent the result to Bernoulli the next day. He sent the solution anonymously and added in the letter, “I do not love to be dunned [pestered] and teased by foreigners about mathematical things…”.

What took some of the best mathematicians over a year to solve, Newton managed to solve in a single evening.

When Johann Bernoulli received the anonymous solution, he knew immediately who had solved it. As he said, he knew the author of the solution “as the lion by its claw”.

Before I give you the answer, I want to go through how simple the problem seems.

If you just think about what the shape would be that would result in the fastest time from A to B, the first thing you might think of would be a straight line.

However, that is not the case.

The next idea might be to have some sort of steep drop so you can pick up speed quickly, and then travel the rest of the way almost horizontally once it has accelerated.

If you were to experimentally test this, you would in fact find that a very steep drop followed by a horizontal run is indeed faster than a straight line.

However, this path is longer than a straight line.

Maybe it might be a shape like a parabola,or some other mathematical shape like a catenary. A catenary is a curve that is created when you hang a chain or a rope between two points. The Gateway Arch in Saint Louis is actually the shape of a catenary.

Or maybe, the solution just might be an arc from a circle?

So what is the solution?

There is a good reason why the solutions to this problem all came from prominent innovators in the field of calculus.

Galileo tried to solve this problem about 60 years earlier. He concluded that the fastest shape would be the arc of a circle. He was wrong because he didn’t benefit of calculus to help him solve the problem.

The solution to the problem, and the shape which is the fastest to slide down from point A to point B, is a cycloid.

Now, you might be asking, what is a cycloid?

A cycloid is the shape you get when you roll a circle one full rotation and follow a single point on the edge.

If you remember the spirograph toys where you had plastic circles and you could put a pen inside the holes of one and loop it around another circle to create patterns? Imagine a spirograph circle with a pen in it where the circle just does one rotation on a straight line.

The resulting curve looks like a long, flat arch.

This is the shape that will make for the fastest possible slide. Any other shape will be slower.

So, OK, this is an interesting fact, and there is a fun little historical story behind it. Is there any practical application to this problem?

In physics, there is something called Snell’s Law. It deals with the refraction of light as it passes from one medium to another. It turns out that Snell’s Law is just a case of light solving the Brachistochrone problem as it always is looking to take the fastest path.

This problem asks if there is a curve such that when an object is dropped down the curve from any point, no matter where it is dropped it will take the same amount of time to reach the bottom.

So, if you had a marble go down the curve from the top, it would take just as long as if it were dropped from halfway down.

It turns out there is such a curve, and the curve is the cycloid. The same curve which is the fastest way for an object to slide down will also fall down the curve at the same time, no matter where you drop it from.

The higher up you drop something, the more distance it travels, but it also has more speed to compensate for the increased distance.

The tautochrone problem was actually solved by the Dutch scientist Christiaan Huygens in 1659.

If you hard time believing either the tautochrone or brachistochrone curves work as claimed, there are many videos available online where people have actually built these curves to demonstrate how they work. I’d suggest taking a look.

It is also a pretty simple project to make one of your own. All you need is a circle, and from that, you can make a cycloid out of wood or thick plastic or whatever.

Just drop a marble down it, and you can prove to yourself what was one of the most challenging problems in mathematics 300 years ago.

Today’s review comes from listener Cla511 over at Apple Podcasts in the United States. They write:

Even Ken Jennings could learn something from this podcast.

Thanks, Cla511. I don’t know if Ken Jennings listens to the show, I doubt it, but I do know that a couple of Jeopardy contestants are regular listeners.