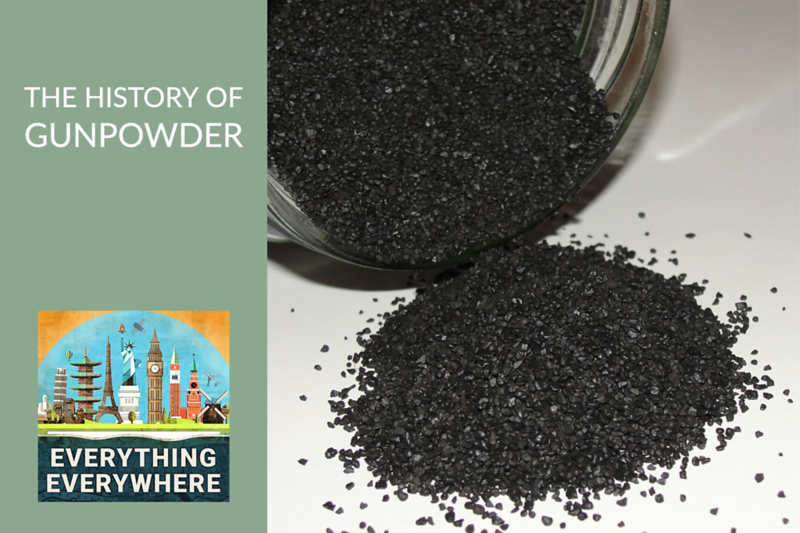 When the ingredients were subjected to a flame, they didn’t just burn, there was a bang.

Over the course of centuries, this discovery spread around the world and dramatically shaped world history.

Learn more about gunpowder, how it was invented and how it spread around the world, on this episode of Everything Everywhere Daily.

I’ve discussed many different inventions and discoveries on this show, and one common theme is that they are often discovered independently by different people in different places, and often at dramatically different times.

This is not the case with gunpowder.

As far as we know, gunpowder only had a single place of origin: China. In fact, if you remember back to my episode on the subject, it is considered one of the Four Great Inventions of China along with paper, the compass, and printing.

There are some minor theorists who have posited an origin other than China, but I find the argument to be very weak. The evidence for China is pretty overwhelming and it dates back centuries.

There was no ancient Egyptian, Greek, Indian, or Roman gunpowder. It was developed and refined in China and then spread west from there. The Greeks had developed flammable substances like Greek Fire, I’ll refer you to my previous episode on the subject, however, that wasn’t gunpowder.

Gunpowder, also known as black powder, was probably discovered by accident by a Chinese alchemist playing with various chemicals. We don’t know who first put the necessary components together, but we do know when it was first mentioned in writing.

The origin probably dates back to the first century. The first alchemist who burned it was probably shocked because they would have discovered the world’s first chemical explosion.

In 142, an Eastern Han Dynasty text called the Book of the Kinship of Three, by the alchemist Wei Boyang, wrote of three powders that would violently fly and dance.

Wei Boyang, who is considered to be the father of chemistry, didn’t explicitly give the formula, so we don’t know if he was talking about gunpowder, but the description does fit gunpowder, and doesn’t really fit anything else.

Less than 200 years later, in 318, the Taoist philosopher Ge Hong gave actual ingredients in the book The Master Who Embraces Simplicity. He listed saltpeter, pine resin, and charcoal.

Before I go any further, I should explain exactly what gunpowder is.

Gunpowder in its simplest form is a mixture of three things: charcoal, sulfur, and saltpeter.

Charcoal is simply a source of carbon. It is extremely easy to acquire and it is the one ingredient that everyone around the world would have.

The second is sulfur. Sulfur isn’t as common as charcoal, but it isn’t uncommon either. Sulfur mines exist around the world and it isn’t like there are only a few places on Earth where you can find sulfur.

The third ingredient is saltpeter. Saltpeter is not that common. The chemical name for saltpeter is potassium nitrate.

The ratio of these three things has changed over the years, but the biggest element in the mixture is by far saltpeter. Modern-day mixtures are approximately six parts saltpeter, to one part sulfur, and one part charcoal.

Gunpowder remained a novelty for centuries. Alchemists toyed with the formula, and we have documentation of their efforts in putting together better sources of carbon and nailing down the proportions.

Even though the recipe, at least rough ones, for gunpowder had been known for centuries, there wasn’t really any practical use for it.

The first real applications of gunpowder occurred in the 10th century during the Song Dynasty.

There were a host of gunpowder-based innovations that came about all around the same time.

The next gunpowder weapon was the fire lance which appeared around 950. A fire lance was just a long spear or a polearm that had gunpowder attached near the end of the spear. It was designed to explode at the start of a clash of infantry units. Eventually, stones and other projectiles were placed in the gunpowder to make it a quasi-shotgun.

By the end of the 10th century, gunpowder had become a central part of Chinese warfare. In the siege of Zitong, 100,000 men of the Liao Dynasty were held back by Song Dynasty forces using fire arrows.

In the 11th century, bombs began to appear which were metal cases filled with gunpowder.

Moreover, given how important gunpowder became, the Song Dynasty began to control the trade of gunpowder and gunpowder ingredients and the production of fire arrows reached into the hundreds of thousands.

Perhaps more importantly, the first gunpowder used outside of China appeared in Vietnam.

In the 12th century, gunpowder weapons were placed on ships. Trebuchets were employed to launch bombs. Bombs were improved and made larger. Also, the very first things which looked like firearms and cannons began to appear.

Firecrackers were also developed, which were just gunpowder on rolls of paper. Firecrackers became a popular way to celebrate festivities in China, and they still have a central use for that same purpose today.

In the 13th century, we have evidence of the very first cannon. The Wuwei Bronze Cannon was discovered in 1980 and it was the earliest known metal bore cannon that has been discovered.

However, the biggest thing that happened to gunpowder in the 13th century was that it escaped from China.

For obvious reasons, the Chinese didn’t want the secret of gunpowder to spread. It was a huge competitive advantage for them.

It was during the Mongol invasions, when the Chinese leadership fractured and weakened, that the recipe for gunpowder was leaked.

We know it appeared around the year 1240 in the Middle East. In the battle of Ain Jalut in 1260, the Egyptian Mamluk Caliphate defeated the Mongols in what is modern-day Palestine and used hand cannons.

The Mamluk chemist Hasan al-Rammah wrote ones of the earliest texts on the purification of saltpeter, which he called Chinese snow, which adds legitimacy to the Chinese origin theory of gunpowder.

When the secret of gunpowder spread out of China, it spread fast.

By 1267, we have the first European mention of gunpowder by the English philosopher and early scientist, Roger Bacon.

When gunpowder spread to the Islamic and Christian world, they had the benefit of centuries of Chinese experimentation as to the formula. The Chinese recipes at that period weren’t perfect, and those imperfections were also found in the same recipes in Europe and the Middle East.

The first documented use in India occurred in 1300 during the Mongol invasion of the subcontinent.

The 14th century saw a massive gunpowder arms race. Here we see innovation spreading beyond China. Now that the gunpowder genie was out of the bottle, you see new uses and weapons developed all over the world.

Europe was particularly adept at innovation with the use of cannons and firearms. Much of this had to do with the fact that while China had innovated with the chemistry of gunpowder, Europeans had better metallurgy.

The Europeans independently developed organ cannons before the Chinese, which are just a whole bunch of barrels put together. They also developed the first breech-loading cannons and a host of other innovations.

There were some enormous bronze cannons in Europe during this period, including some that were 30 feet or 10 meters long.

India was also independently inventing many gunpowder weapons during this time as well, and gunpowder began to become extremely important in military campaigns.

Cannon and firearm development continued for centuries, and I don’t want to make this episode just a litany of gun innovations. The focus of the episode is gunpowder itself.

As I mentioned before, the primary ingredient in gunpowder is saltpeter or potassium nitrate.

Getting sufficient quantities of this substance became a real problem. While there are some quantities that can be found in nature, there isn’t a lot.

Around the 13th century, there were only two natural sources of saltpeter in Europe. One around Montpellier in France, and another in Aragon in Spain.

Saltpeter was a huge strategic resource in the late middle ages.

In the 16th century when England was at war with Spain, Spain naturally stopped all exports of saltpeter to England. Queen Elizabeth I paid 300 pounds of gold to the German military commander Gerrard Honrik for a book titled “Instructions for making salpeter to growe”.

Based on the price of gold today, that book cost approximately $9.3 million dollars.

Most countries began to produce their own saltpeter as natural sources couldn’t meet their demand.

The primary means of producing saltpeter was through the collection of excrement. In a previous episode I talked about the evolution of sewers and how in Europe, people would be paid to clear out cesspits.

The reason why they did that is that all of that waste had value. It was used in the creation of saltpeter.

The waste would be spread in what was known as a Nitre bed at a place called a Nitrary. Other rotting organic matter would also be used as well if it was available.

Processes vary, but it basically involved mixing the excrement with soil, sand, or wood ash. The potassium nitrate crystals would eventually come to the surface as a salt through a process known as efflorescence.

The crystals would be collected and purified and then made into gunpowder.

During the US civil war, the Confederacy had a shortage of saltpeter due to the Union embargo, and so they created the Nitre and Mining Bureau for the creation of saltpeter to make gunpowder.

In the early 20th century, industrial production began. Potassium nitrate was made from nitric acid which could be produced from the Haber process, which I talked about in my episode on Fritz Haber.

There is actually very little gunpowder that is made anymore. Most propellants are made out of what is known as smokeless powder.  It burns with very little smoke or residue.

There is a pretty good argument to be made that humanity would have been a lot better off if gunpowder had never been invented. There has been over a thousand years of war where gunpowder has been used to kill people en mass.

Nonetheless, it was invented, and it has shaped human history ever since.

I have a pretty big correction to make on a recent episode.

Most of the times when people send me a correction, it usually falls into the category of a different interpretation or a different theory someone might have.

There are alternative theories for many things in history, and given that each episode of this podcast is only about 10 minutes, I don’t usually have time to get super deep on every possible way to analize something.

Sometimes it is a difference of opinion. For example, is the piano a string instrument or a percussion instrument? There are hammers that hit strings. You can easily find people who will say both, and I fall into the string camp.

However, sometimes I am just guilty of a total brain fart, and when someone points it out, I just have to hit my forehead because the mistake was so dumb.

Listen Angela Hooker pointed out over on Castbox that in my episode on Hydrogen, I said you can create hydrogen by mixing baking soda and vinegar.

Angela, who is a chemistry teacher, correctly pointed out that the classic science fair experiment produces CO2, not hydrogen.

What I should have said was caustic soda, aka lye, aka sodium hydroxide, when it encounters aluminum, will produce hydrogen.

There are YouTube videos which demonstrate this, and there was even an industrial accident in 1986 when an aluminum tanker truck was used to transport a sodium hydroxide solution and the hydrogen pressure damaged the tank.

So, thank you Angela.