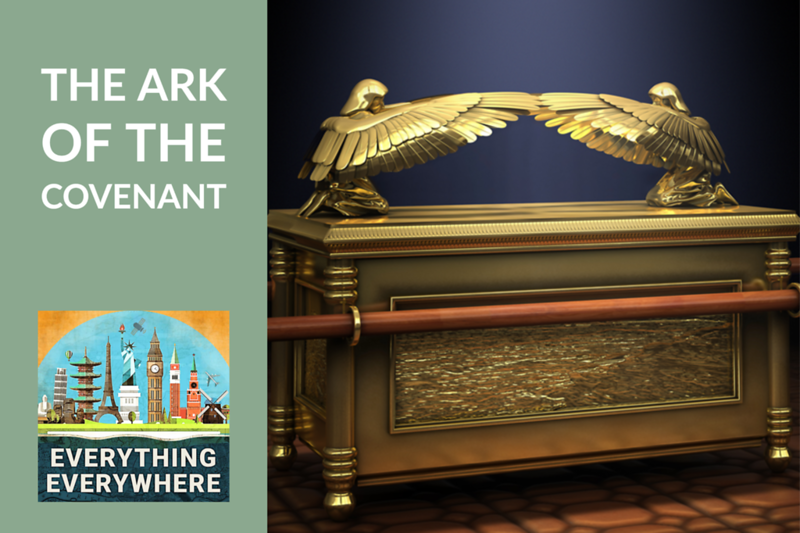 It was the single most sacred object in the Jewish faith. According to the bible, it was an object of incredible power that could win battles. It was the entire reason why the temple in Jerusalem was built.

Then…it just disappeared and it was never mentioned again.

Since then it has become an object of mystery capturing the attention of explorers, adventurers, and even Indiana Jones.

Learn more about the Ark of the Covenant on this episode of Everything Everywhere Daily.

Everything we know about the ark of the covenant comes from the old testament of the bible, so any discussion of the ark should begin with an overview of the biblical story.

The Israelites were enslaved in Egypt. Moses, aka Charlton Heston, is born and petitioned the Pharoah to set them free. Pharaoh says no, and Moses brings down 10 plagues to punish Egypt. Lots of frogs, insects, and blood.

Eventually, the 10th plague, killing the firstborn of every household, except the Israelites, was the final straw, and the Israelites are freed.

This is celebrated today as Passover.

Moses and the Israelites wander around the Siani desert for 40 years. During this time God looks out after them, sending mana from heaven that they could eat.

Then Moses is commanded by God to climb Mount Siani where he is given the Ten Commandments on stone tablets from a burning bush.

Moses was up on the mountain for 40 days and 40 nights and while he was there, God gave him the plans for a container to house the stone tablets with the Ten Commandments.

The instructions given for the container in the Bible were oddly specific. It was to be 2½ cubits long, 1½ cubits wide, and 1½ high. A cubit was defined to be the distance from your elbow to the end of your middle finger. The size of it would be approximately the size of a steamer trunk.

The entire thing was to be made of wood and gilded in gold with two cherubim angels on the lid.

There were metal rings on the corners through which two wooden poles would be put which is how it was carried.

In addition to the tablets of the Ten Commandments, the contained also contained mana from the desert as well as the rod which Aaron, Moses’s brother, threw at the feet of the pharaoh which turned into a snake.

This container became known as the Ark of the Covenant, the covenant referring to the Ten Commandments.

This object became the focal point of the entire Israelite religion.

As the tribe wandered around the desert, it was led by men carrying around the ark.

Whenever they set up camp, the ark was placed in a special tent called a tabernacle.

The ark was said to have supernatural powers. When the Israelites crossed the Jordan River, supposedly it parted when the priests carrying the ark touched the water.

During the Battle of Jericho, the Israelites marched it around the city every day for a week, and on the seventh day, the walls of the city supposedly fell.

The ark was stolen by the Philistines and then returned. Finally, King Solomon built a temple in Jerusalem whose purpose was to be a home for the Ark of the Covenant. The inner sanctum of the temple, known as the holiest of holies, was the location where the ark was located.

Only the high priest could enter, and even then only once per year.

Eventually, in 587 BC, the Babylonians attacked Israel, sacked Jerusalem,  and destroyed the temple. The Ark of the Covenant disappeared from history.

It is assumed that the Babylonians took the ark, but no one knows for sure.

For an object of such central importance to Israelites, the total lack of mention of the ark from here on out is puzzling, and here is where the mystery begins.

There are other mentions of the ark in the New Testament and even in the Koran, but they are just that, mentions. They are simply referring to the ark, not giving any clues as to what might have happened to it.

The first clue of what might have happened can be found in the Second Book of Machabees. The second book of Machabees is in the Catholic and Orthodox Bibles but not in Protestant or Jewish Scriptures.

In it, it says that the prophet Jeremiah took the Ark and hid it in a cave somewhere and that the location wouldn’t be revealed until the last days.

The interesting thing about this is that the area around Jerusalem is in fact riddled with caves. One of the reasons why Jerusalem was located where it was because of its exposed limestone which made it easy to build on.

There are caves under Jerusalem today that you can visit and take tours of.

These caves and all the surrounding caves in the area have been well explored and the ark has never been found. So, either there is some hidden cave that has never been discovered, or it isn’t there.

However, the one exception is the Dome of the Rock, which hasn’t been explored for caves because of the religious significance of the site. This is thought to be the original site of the Temple and currently, there is no way to know what might be underneath it.

We do know that a second temple was built in Jerusalem after the Jews returned from Babylon, but it never contained the ark. It was this temple that was renovated by Herod the Great and later destroyed by the Romans in the year 70.

There are however other rumors and legends about what might have happened to the ark that have spread for centuries. I should reiterate that these are all legends and stories and there is little hard evidence for any of them.

One of the most interesting stories comes from Africa. In particular, South Africa and Zimbabwe which is the home of the Lemba people. There aren’t many Lemba, maybe only about 50,000, but they claim to be Jewish.

They observe the sabbath, they eat kosher, they ritualistically slaughter animals, males are circumcised, and they considered themselves a chosen people.  There is even genetic evidence that the Lemba might share some genes with people from the Levant.

According to their legends, before the fall of Jerusalem by the Babylonians, the ark was taken to Arabia to what is today Sana, Yemen. From there it was then taken East Africa and then brought down to the civilization that was known as Great Zimbabwe, on which I’ll be doing a future episode.

They then believe it self-destructed when it arrived in Zimbabwe and a fragment of the original ark was used to reconstruct it.

Another theory holds that the ark might have been found in the Tomb of King Tutankhamen in Egypt.

In 1922 when Howard Carter opened the tomb inside the found….an ark. Or, at least it was something very ark-like, or ark-esque.

The object was a wooden box with two long poles that were used to carry it.

However, it had an image of the Egyptian god Anubis on it, and otherwise, other than being old and ark-like, didn’t really fit any of the descriptions.

A French author, Louis Charpentier, claims that the Knights Templar found the ark during the crusades and took it to Chartres Cathedral in France.

Another story is that early Christians brought it back to Rome and it was held in the Basilica of St. John Lateran. Supposedly a rabbi in Rome claimed to have seen it in the basilica sometime in the second century.

There was a fringe group who thought that the people of Great Britain were the lost tribe of Israel and that the ark was located at the Hill of Tara in County Meath, Ireland, which was the site of a neolithic earthwork. It was almost torn apart in the early 20th century by people looking for the ark.

The best, or at least the most emphatic claim to the location of the ark is in Ethiopia.

The ark of the covenant is actually central to the Ethiopian Orthodox Church.

Their legend is much more specific than many of the others surrounding the ark.

While in Jerusalem she had a child with King Solomon who was called Menelik. Menelik stole the ark and took it back to Ethiopia, where it has remained to this day.

The Ethiopians claim that the original ark is located in the city of Axum in a small building called The Chapel of the Tablet. It was formerly held in a nearby building Church of Our Lady Mary of Zion. The church was rebuilt in the 1950s and the chapel was built around the same time. The chapel was paid for by Empress Menen, the wife of the then Ethiopian Emperor Haile Selassie.

No one is allowed to go inside the Chapel of the Tablet save for one man: a monk who is appointed the Guardian of the Ark. The appointment is a lifetime position and once appointed, the guardian can never leave the building until he dies. He appoints his successor in his will.

Most monks when they find they have been appointed guardian, will often break down in tears knowing that they will never leave the grounds of the chapel again.

Even the head of the Ethiopian Church is not allowed in the presence of the ark.

One person, an English professor of Ethiopian Studies, Edward Ullendorff, claimed to have seen the ark when he was in Ethiopia in 1941. He claims that their ark is just a medieval replica that is empty, but he has no evidence that he actually saw it.

The problem is, whatever is inside the chapel, we have no way to verify if it is legitimate or not.

I’ve actually been to Axum and have been outside of the Chapel of the Tablet.  I saw the monk who I assume was the guardian who was inside the fence surrounding the chapel.

The truth is, we have no way to know where the Ark of the Covenant is. It could be in Ethiopia, it could be in a hidden cave in Jerusalem, or it might be in a warehouse filled with wooden crates somewhere outside of Washington DC. Or, it might not even exist at all.

Nonetheless, regardless of where it is or isn’t, the Ark of the Covenant probably was one of the most significant objects in world history.

Today’s review comes from listener BreezyBalls2015 at ApplePodcasts in the UK. They write:

This podcast purrs like a well-tuned V12. Succinct, poignant, relative, and subliminally researched. You have to take this bad boy for a spin, it would be rude not too.

Thanks, BreezyBalls! Given your analogy to a V12 engine, I think I should use this opportunity to make a correction in a previous episode. In my show about the internal combustion engine, I mentioned that you don’t see engines with an odd number of pistons.

Many people reached out to tell me that there were in fact cars built with 5 cylinders. I honestly had never heard of a 5 cylinder car and sure enough, they were actually a thing. In my defense, there weren’t many of them and they weren’t popular, but I stand corrected.