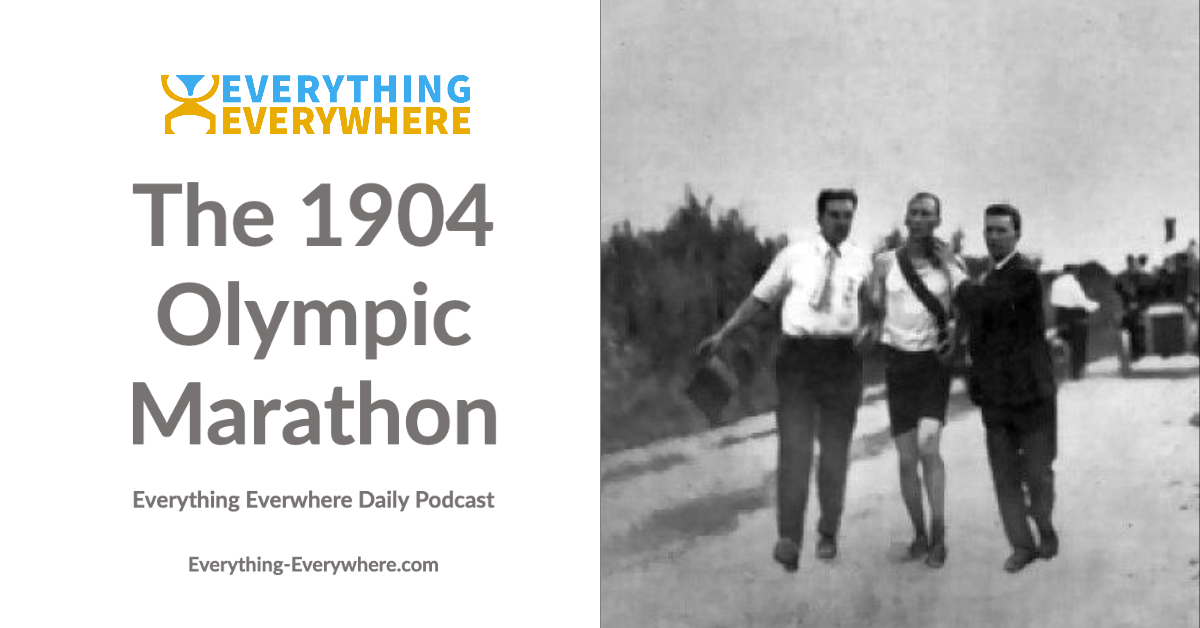 The 3rd Olympic Games held in 1904 in St. Louis, Missouri was unquestionably the greatest train wreck of an Olympics ever held. In fact, the Olympics in ancient Greece were probably better organized and better attended than the 1904 Olympics.

Nothing quite exemplifies the hot mess which was the St. Louis Olympics quite like the 1904 Olympics Marathon, which was such a disaster, it almost killed several competitors, and almost permanently removed the marathon as a competitive event.

Learn more about total failure which was the 1904 Olympic marathon on this episode of Everything Everywhere daily.

The problems in St. Louis started when the Olympics were first awarded.

To paraphrase Dante from the movie “Clerks”, “the Olympics weren’t even supposed to be here.” The original city which was awarded the Olympics wasn’t St. Louis, but Chicago.

However, in 1903 St. Louis had scheduled the Louisiana Purchase Exposition which was supposed to commemorate the 100th anniversary of the Lewis and Clark Expedition. However, they couldn’t pull it off in time, so it was delayed until 1904.

They didn’t want another international event taking place at the same time in the United States, let alone a neighboring state, so they threatened to host their own sporting event during the world’s fair to compete with the Olympics.

At the time, the Olympics wasn’t the big deal it is today, so the threat was real could have affected the long term prospects of the event.

Pierre de Coubertin, the founder of the modern Olympics, eventually relented and awarded the Olympics to St. Louis.

The games were scheduled over a 5 month period, from July to November of 1904, which coincided with the world’s fair.

The games were also held during the Russo-Japanese War which limited the number of countries attending. It was also located in the middle of the United States at a time when there was no air travel. Athletes coming from Europe would have had to cross the Atlantics by ship, then work their way overland to St. Louis.

As a result, the vast majority of the competitors were from North America. Of the 96 gold medals awarded at the games, 86 were awarded to the United States, Canada, or Cuba. The games were so lopsided in favor of the United States that it almost shouldn’t be counted as a real Olympics.

The temperature at the start of the race was 33 °C or 92 °F. That in and of itself was pretty bad, but the near 100% humidity at the time made it even worse. The heat index, which is what the temperature feels like with humidity, reached 57 °C or 135 °F. It was one of the hottest races ever run in history.

To put this in perspective, the ideal temperature to run a marathon is considered to be around 49°F or about 10°C. Modern race organizers are advised to postpone a race if temperatures get above 70°F or 21°C. This is why all the major marathons in the world are almost always run in the spring or fall.

The reason why cool temperatures are preferred is because of the amount of heat someone will produce when running. Even putting aside the humidity heat index, there is a specific heat index for runners which takes into consideration how hot it would feel for a runner. The index doesn’t even calculate it over 85°F or 30°C and 60% humidity because it’s just too dangerous.

In summary, you don’t want to run when it’s hot, and on this day it was REALLY hot.

The route through St. Louis began and ended in the stadium, but the majority of the route was on a dusty dirt road. The word “dusty” isn’t just a throwaway adjective here. One of the competitors, William Garcia of California, had to drop out of the race because his esophagus and had become coated in dust and tore up the lining of his stomach causing it to bleed.

The organizer of the games, James E. Sullivan, wanted to use the marathon to run an experiment on “purposeful dehydration”. Sports science hadn’t really reached the level of a “science” in 1904. Not only was the idea of running a dehydration experiment in the middle of an Olympic event crazy, but doing so on one of the hottest days of the games was doubly so.

There were only two places on the route where the competitors could get water. A water tower at the one-quarter mark, and a well at the half waypoint. That meant for the entire second half of the race, on one of the hottest days of the year, on a route where everyone was inhaling dust, there was no water.

To put this in perspective, the average marathon today will have around 8 to 12 hydration stations along the route.

The entry with the most fascinating story was probably Félix Carvajal, a mailman who traveled from Cuba. He was not a competitive runner. He didn’t qualify for the Cuban Olympic team, and the Cuban delegation had no idea he was even going to appear. He just showed up the day of the race, and they let him run.

After arriving in the US, he lost all his money in New Orleans in a dice game and had to hitchhike to get to St. Louis. He arrived just before the start of the race and had nothing but his street clothes to compete in, which consisted of long underwear and a long sleeve shirt. One of the competitors cut off the legs of his pants so he could run easier, which was the only adaptation he was able to make for the race.

By the start of the rase, Felix hadn’t eaten for 40 hours and along the way stopped to eat some apples from an orchard. Unfortunately, the apples were rotten and gave him stomach cramps. He decided to lay down and take a nap.

….taking a nap in the middle of the Olympic marathon.

Despite all of that, he finished fourth.

(A side note about Felix, he was chosen to represent Cuba at the 1906 Olympics in Athens, which would be paid for by the Cuban government. On the way there, he got off the ship in Italy and disappeared. The Cubans thought him dead and published his obituary. He showed up several months later in Havana on a Spanish steamer.)

There were two entries from South Africa who were members of the Tswana tribe. They were first two African competitors in Olympic history. They too were not accomplished runners. They just happened to be in St. Louis working at the South African exhibition at the world’s fair, so they thought they’d give it a try.

During the race, they ended up running over a mile off course because they were both chased by wild dogs.

They finished in 9th and 12th place.

The first “winner” of the race, (and I am putting air quotes around winner), was Fred Lorz. Lorz was an actual runner, insofar as there were runners back in 1904. He would go on to be the winner of the 1905 Boston Marathon and placed in the top 10 in several other marathons.

However, in this race, Lorz didn’t exactly run a marathon. About 9 miles into the race he gave up and was driven in a car the next 11 miles by his trainer. He then ran the remainder of the way, re-entering the stadium on foot to the applause of the crowds.

At the time, they didn’t have an official medal ceremony, so after he crossed the finish line, he was awarded the gold medal and had his photo taken with dignitaries such as the current president, Theodore Roosevelt’s, daughter.

However, someone in the stands witnessed Lorz getting in the car, and he quickly confessed and said it was just a joke. Ha ha. Very funny.

Lorz was given a lifetime ban by the Amateur Athletics Union, which was quickly rescinded just a few months later.

The actual winner of the race was American Thomas Hicks, and his story might be the most interesting of them all.

Hicks won the marathon with a time of 3 hours and 28 minutes, which is far and away the worst time ever for any Olympic marathon winner by over a half an hour.

Hicks won the race even though he had what was arguable the worst trainers in the history of sports.

At the 10 mile mark, he asked his trainers for water, and they refused to give him any. They just gave him enough distilled water to coat the inside of his mouth.

With 7 miles to go, his team gave him a concoction of strychnine and egg whites. At the time, small doses of strychnine was thought to be a stimulant.  It is a chemical that is probably best known as a rat poison.

After a few more miles they gave him another rat poison, egg white cocktail, but this time with some french brandy.

…Yes, they actually gave him hard liquor during an Olympic marathon.

With just 2 miles to go, he was told of Lorz win being revoked which gave him some extra energy, but he soon began hallucinating thinking the finish line was over 20 miles away.

His team gave him still more brandy, and as he entered the stadium, he was barely walking and his trainers had to assist him by the shoulders to get him across the finish line. Something which would have been totally against the rules, assuming they actually had rules.

He immediately collapsed after crossing the line, exhausted and dehydrated. It took four doctors an hour to get him back on his feet, and he had lost 8 pounds, or 3.6 kilograms, during the 3.5 hours of the race.

Of the 32 runners entered in the race, but only 14 actually finished, the lowest percentage of entrants to finish an Olympic marathon by a wide margin.

Given the circumstances, it is amazing that anyone did.