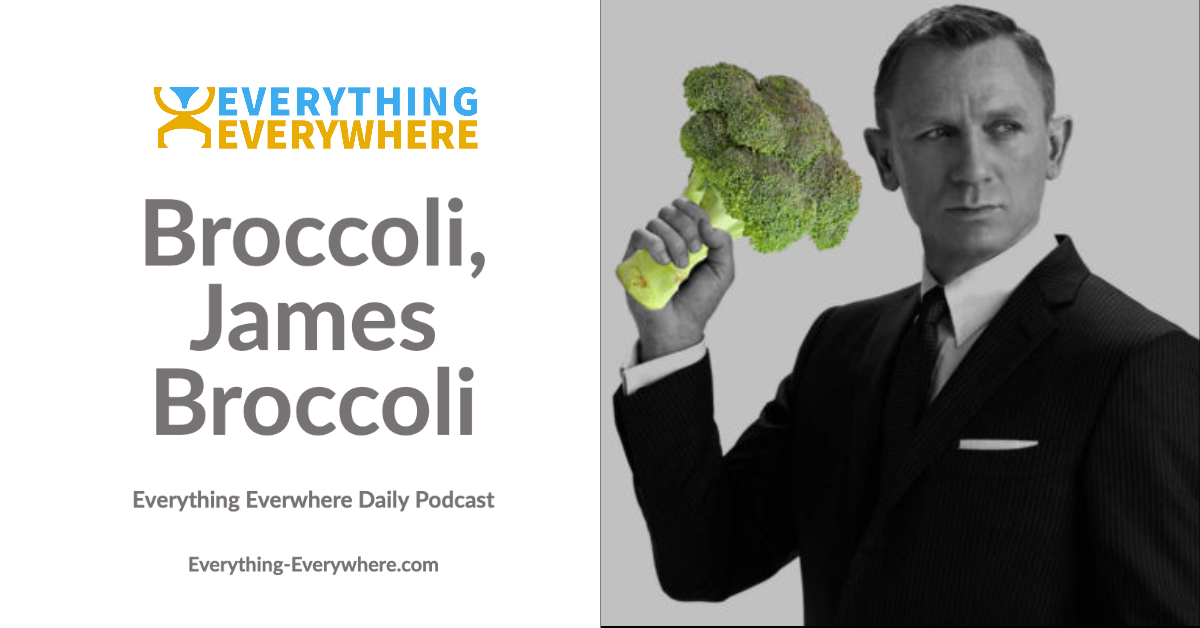 You probably couldn’t think of two things which are further apart than the character James Bond and the vegetable broccoli. Yet, in a not so roundabout way, there is a very direct connection between the two.

In fact, if it wasn’t for broccoli, we might never have had any James Bond movies.

Find out what the link is between this cruciferous vegetable and a fictional British spy on this installment of Everything Everywhere Daily.

The broccoli plant that you and I all know hails from Italy, where a variant of it has been a staple food for centuries. It is essentially an edible flower and it is related to other vegetables such as kale, cauliflower, and Brussels sprouts.

Broccoli isn’t a native wild plant. It was believed to be created by the selective propagation of wild cabbage ancient Etruscans.

For the most part, the broccoli plant stayed in the Mediterranean. During the 18th century, it did spread somewhat becoming known as “Italian Asparagus” in England. There are reports of Thomas Jefferson trying to plant some broccoli seeds in Virginia, but the plant never took off and gained popularity.

The broccoli variant we are familiar with is called Calabrese broccoli, named after the region in Italy where it was developed. It was created in the 19th century by an Italian family who crossed cauliflower and a plant called broccoli robe, which is actually more closely related to a turnip.

At the turn of the 20th century, Giovanni Broccoli (yes, that is the family’s name) and his brother emigrated from Calabria to Long Island where they started a farm, producing the Calabrese broccoli they grew up with.

The farm grew quickly as their broccoli exploded in popularity in the United States. Eventually, the entire Broccoli extended family was working on the family farm.

After moving to Long Island, Giovanni had a son named Albert. Like the rest of his family, Albert worked on the family farm, harvesting, packing, and shipping broccoli.

Albert’s cousin, Pat DeCicca, left Long Island for Hollywood, made his fortune as an agent and producer, and wound up marrying silent film star, Thelma Todd.

(Side note, Pat DeCicca later married Gloria Vanderbilt, who is the mother of CNN’s Anderson Cooper. You can’t really call him his stepfather, however, as it all happened before he was born.)

Pat invited Albert out to Hollywood, and with stars in his eyes, he left New York and headed to California.

Albert, who’s nickname was Cubby, made the move out to Hollywood and after a series of menial jobs, landed a position as an “assistant director” on the set of the movie “The Outlaw”, after a chance meeting with Howard Hughes.

Assistant Director sounds like an impressive title, but in reality, he was just a gofer and a personal assistant to the director, Howard Hawks. During the movie, Hawks stepped down as director and Hughes took over, which set up a working relationship between Broccoli and Hughes which extended beyond World War Two.

Cubby Broccoli had created a fairly successful career for himself in Hollywood, but being an agent wasn’t what he really wanted to do. What he wanted to do was become a producer.

He was well into his 40s before he happened upon the idea which would make his dream of being a producer come true. In 1950, the British Government passed a law called the Eady Levy, which was a tax on box office receipts. The money was to be used to create the British Film Production Fund which was to subsidize the British film industry.

He realized that if he were to shoot films in the UK and hired a crew that was 80% British, he could get large subsidies from the British government, potentially in the millions of pounds.

Broccoli and his partner produced a series of films in the early ’50s using Eady Subsidy money, including “The Red Beret”, “Hell Below Zero”, and “Fire Down Below”. All action films with a strong, charismatic male lead.

It was in the early 60s that Broccoli began reading books about a secret agent by the author Ian Flemming. He assumed that some major studio would have tied up the movie rights to the books, but when he researched it, he found that only one book, Casino Royale, had actually been optioned by a major studio.

The options on the rest of the books were held by a Canadian named Harry Saltzman, who was interested in making the movies but couldn’t secure funding.

Broccoli tried to buy out Saltzman’s rights to the books, but he refused to sell. Instead, they created a 50-50 partnership and a production company called Eon Productions.

The pair booked a meeting with United Artists in New York, and within 45 minutes they had a six-movie deal with $1 million in funding for the first film.

Casting for the lead role of James Bond was extremely important. The entire success of the franchise would rest on who they got to play the role.

Broccoli’s first choice was his friend, and the best man at his wedding, Cary Grant. Grant would have been perfect for the role, but there was no way they could afford him with the limited budget they had.

The next choice was a British actor by the name of Roger Moore, but he was busy shooting the television show “The Saint”.  Moore later went on to play James Bond in the 1970s.

The person they eventually choose was discovered from his role in the 1959 Disney movie “Darby O’Gill & The Little People”.  That was of course Sean Connery.

They made the movie Dr. No, which was a critical and box office hit, and it spawned the longest-running franchise in the history of motion pictures. The next Bond film, “No Time to Die” will be the 25th installment in the series.

Albert Broccoli passed away in 1996. Like the family’s broccoli farm in Long Island, the production of James Bond films has become a family business. The main producers of the films today are his daughter Barbara Broccoli and his stepson, Michael G. Wilson.

Even though Albert Broccoli passed away almost 25 years ago, his name is still the first words that appear on the opening credits of every James Bond film.

Even though it is a long circuitous path, there is a definite connection between the family that gave us broccoli, and the man which brought James Bond to life.