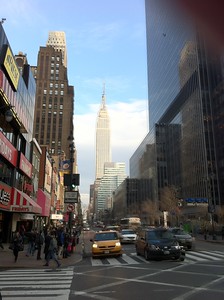 Well, my week in New York is wrapping up. What began as an audible* I had to call from Puerto Rico turned out all right in the end.

Here are some of the highlights of my week in New York:

Staying At The Jane Hotel

It took me a while to find a place to stay in Manhattan. I eventually settled on The Jane Hotel. Normally, I don’t talk about the places I stay at. The only reason I bother to mention the Jane is because it is a rather unique place. The rooms at the Jane are……small. Really small. It is by far the smallest room I’ve ever stayed in. I’ve literally seen closets which are larger. The whole room was 50sq/ft. The entire room was the size of two twin beds side by side.

You have to deal with a communal bathroom, a lack of space to work (other than a bar), cramped quarters and the elevator was out of service. Oh, I should also point out that I was kicked out of the bar on my first night because I had a laptop. They cater to a trendy crowd I think my nerdiness was cramping their style.

The size really didn’t bother me, I just thought it was an interesting solution to dealing with the space and cost issue for a hotel in Manhattan. If you can deal with all of the above things I mentioned, it is one of the cheapest options you’ll find in that part of Manhattan.

When I arrived in New York I received an unsolicited email from a group called Art Meets Commerce. They asked if I was interested in seeing Broadway show. Considering I had never been to a Broadway performance and I was considering doing just that, I said yes.

The show I picked (and this is very obvious if you know me at all) was Lombardi. I’m a Packer fan, I grew up not far from Green Bay, I own a share of stock in the Packers and they just won the Super Bowl. It was an easy choice.

I went with Kim Mance of GoGalavanting.com, who also had never been to a Broadway play before.

Dan Lauria (The Wonder Years) and Judith Light (Who’s The Boss) played Vince and Marie Lombardi. They did a great job casting. The entire cast was only 6 people and it played in the The Circle in the Square Theatre, which was very small and intimate.

The play only covered a week during the 1965 season as told through the eyes of a reporter from Look Magazine (with some flashbacks). They did a great job of showing personality of a very complex figure.

I enjoyed the hell out of it and you really don’t need to be a Packer or even an American Football fan to understand the dynamics at work.

Show discounts to Lombardi for Everything Everywhere readers are available through March 27. 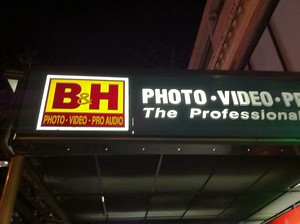 B&H Photo is probably the largest video and photography retailer in the world. For those of you who aren’t photography buffs, B&H is a really big deal. Their store is in Manhattan and I just had to make a stop while I was there. It is the Mecca of photography. Actually, it could be more accurate to say it is the Jerusalem of photography because the store is owned and mostly staffed by Hasidic Jews. The store is closed on Saturdays and they keep all the Jewish holy days.

Just before I entered the store I took the above photo of the sign outside their store and sent out a rather innocuous tweet. I didn’t mention their twitter handle nor did I even mention the name of the store or even photography.

Two days later while walking around Midtown Manhattan I received an email from the head of marketing B&H inviting me to come to the store to get a tour. I immediately walked to the store and met with some of the marketing team and purchased a few odds and ends I was planning to get anyhow: a shutter release cable, a diffuser for my flash, and an extender cable for my flash.

I still have no idea how they even found out about the tweet. Kudos to their marketing team for being on the ball. If I had just gone back to buy my stuff I wouldn’t have thought to write about it. Taking the time and effort to contact me however, really impressed me and it isn’t something most stores would have done. 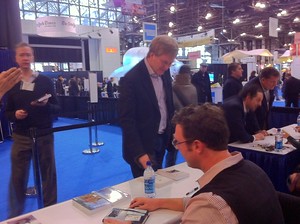 The last big thing, and the entire reason why I stayed in New York for a week, was the New York Times Travel Show.

I had never attended a travel show before and the New York show is one of the biggest. It was also an opportunity to meet up with travel bloggers and writers that I don’t normally get to see. My This Week In Travel co-hosts Jen Leo and Chris Christensen were both there on Sunday. I also got to meet up with Andrew Evans of National Geographic, the above mentioned Kim Mance, Robert Reid of Lonely Planet, and David Farley. There were also many other people I was able to meet for the first time that I previously only knew through Twitter, who are too numerous to mention. I want to give a shout out to all of them, especially the group I went to dinner with on Friday night.

Professionally, it was a good move attending. I was able to meet with many people that I otherwise couldn’t meet because I’m traveling. This end of things has always been difficult for me and is one of the things I have set about to correct in 2011.

I also got to see such travel personalities like Rick Steves, Samantha Brown and Arthur Frommer.

In all it was very productive and I’m looking forward to attending the LA show in March.

I’m now off to the island of Lanai in Hawaii where I”ll be for the next week! Aloha!

* For you non-American readers, “calling an audible” is a figure of speech which stems from American Football. Normally a play will be determined by the coach or quarterback before the players line up. If the quarterback sees that the other team is prepared or thinks the play will not work, he will audibly call out a brand new play at the last second while everyone is lined up.

When you “call and audible” that means you are making a new plan at the last second.

** Lombardi photo is courtesy of the production. Photography wasn’t allowed in the theater.