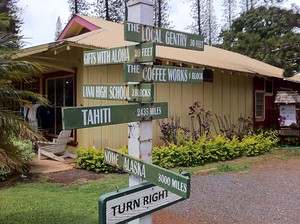 I haven’t updated much in the last week because I’ve been on the island of Lanai in Hawaii. It is another one of these periods where the traveling has overtaken the blogging. I’ve been switching hotels every two nights, been dealing with business stuff and of course just doing my usual traveling and taking photos during most of the day, which usually makes me tired in the evening and in no mood to write.

I’ll be writing much more about Lanai in the next few weeks but suffice it to say it was a very different experience from what I’ve had on other Hawaiian Islands. Lanai is really a small town with only 3,100 inhabitants. It is on the opposite end of the spectrum from the in your face tourism you will find in Waikiki. Lanai calls itself the Pineapple Island, but it really should get another nickname. Something like “the hidden gem island”, or “the best kept secret island”. The fact that they don’t grow pineapples there anymore only supports this fact.

I am still kicking myself for not having taken the time to go to Lanai when I was first in Maui back in 2007. It is a very easy ferry ride and you can easily make a day trip out of it if you are in Lahaina. I thought about doing it back then, but for some reason (sloth) I never did.

I went off-roading for a day in a rented Jeep, skeet shooting, saw an enormous pod of dolphins (I’d guess 30-40), saw a whale give birth (I think. I’ve never seen it before), and had two really great SCUBA dives in lava tubes off the shore of Lanai.

I’m currently back in Maui where I’m spending two days in Hana, which is on the far east side of the island at the end of the famous Hana Coast Highway. Hana, however, is another story….

Here are a few photos I took from Lanai on my iPhone (SLR photos will be coming later):

My trip to Lanai was sponsored by the Lanai Visitors Bureau.