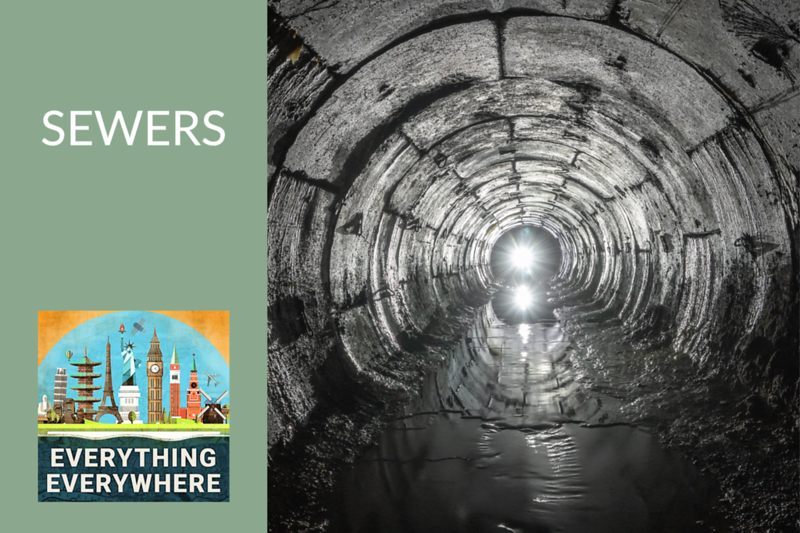 Sometimes the most important things are things we don’t even want to think about let alone talk about.

The issue of handling and removing human waste and dirty water is one such problem that has confronted humans since the dawn of time.

The elimination of waste and excess water was one of the fundamental things which allowed cities to grow all over the world.

Learn more about sewers…..yep, I’m doing an episode on sewers, on this episode of Everything Everywhere Daily.

Sometime around the year 2008, the world passed a significant milestone. That was the point where more than half of the population in the world lived in urban areas.

This wouldn’t be remotely possible if it wasn’t for sewers.

The problem of dealing with human waste was something humans had to deal with since humans became human.

When we were just hunter-gatherers, it wasn’t probably that big of a deal. Because you probably moved around frequently, you just had a set of simple rules like go away from the camp, don’t go near the water, and don’t get eaten by a lion.

Once humans settled down and lived in permanent settlements, waste became a much bigger problem. You had to do something with it.
One option was to dig a hole and just let the hole fill up. Another option was to throw it into the street, which was actually something that was done for longer than you might have imagined.

The option which soon became quite obvious to many civilizations was to let the water flush the waste away.

The earliest evidence we have of some sort of early sewer system date back to the earliest human settlements. They would often just dig shallow ditches which would merge with neighboring ditches, which would eventually reach a nearby river.

These were not only dug to remove waste but to remove excess water which might come about from rain or flooding, which could damage crops.
The first evidence we have of a more advanced system was in ancient Summaria in Mesopotamia. There, archeologists have found evidence of clay sewer pipes that date back about 6,000 years, which is pretty much going back to the founding of cities themselves.  They have also found evidence of latrines made of brick.

Clay pipes were a big innovation because they could easily be taken apart in sections for repair or cleaning. However, these Sumerian clay pipes weren’t really what you could call a full-blown sewer system.

Probably the first true sewer system was found in cities in the Indus Valley in India about 4,300 years ago. There you can find underground, brick-laid drainage systems going from individual houses and public baths. These would lead to covered channels on a street which would then all lead to the river.

The Minoan civilization on the island of Crete took the Sumerian innovation of clay pipes and buried them. Evidence of the first thing we could call a flush toilet was also found amongst Minoan ruins.

The greatest of all the ancient sewer systems, however, has to be Rome’s. The Romans were incredibly proud of their sewer, often bragging about it to visitors to the city, and it still exists today providing the exact same function that it did when it was built over 2,500 years ago.

The Romans often get a lot of attention for their aqueduct system of bringing water into Rome, but how they got water out of Rome is usually overlooked.
The Roman sewer was and is known as the Cloaca Maxima. The exact date it was created isn’t known, but it was probably built even before the Roman Republic sometime around the year 600 BC, during the Roman Kingdom period. This makes the Cloaca Maxima one of the oldest existing things still in Rome, and probably the oldest thing in the world which is still used for its original intent.

The Cloaca Maxima was originally just a canal built by the Etruscans who lived there before the Romans did. It was eventually covered up and much of the city was built at a level above it.

Where most ancient drainage systems would have been rather small, the Roman one was massive. Pliny the Elder in the first century that it was “large enough to allow the passage of a wagon loaded with hay”.

The Cloaca Maxima was used as both a waste sewer and a storm sewer to remove excess water during storms. The problem with this system was that if there was too much rainwater, the entire system could back up, ejecting waste out of the sewer into the streets.

The Roman sewers were also often the dumping ground for dead bodies, including a couple of emperors.

Under Emperor Agustus, the Cloaca Maxima was renovated as part of a major infrastructure project and its use and condition varied over the centuries as Rome’s population rose and fell.

Rome almost certainly could never have had such a massive population and become the first city with one million inhabitants if it wasn’t for the Cloaca Maxima.

The Romans also took their sewer system ideas with them when they planned out new cities across their empire.

I don’t want to leave you with the impression that every city in history developed a sewage system. This is far from the case.

Most cities, even major cities, were not planned. They grew organically, usually starting with a very small settlement.

Even the ancient cities that I mentioned that did have sewers didn’t necessarily have sewers everywhere. Often they had to rely on what was known as a cesspool or a cesspit. As the name implies, it would just be a giant pit with waste.

Cesspits were in use in urban areas in Europe and North America as late as the 18th and 19th centuries as the population of many cities outstripped their ability to build sewer systems.

In an urban area, cesspits did serve to get waste off the streets, where people would often directly dump chamberpots. However, all it did was concentrate all the waste into one horrid container that would have to eventually be emptied.

The idea of a cesspit still exists today in a much more modern form of a septic tank. Instead of a guy with a shovel, the process can now be done cleanly and quickly with a truck with a giant vacuum.

As cities grew, however, everyone pretty much recognized the need for sewers.
One of the greatest and oldest sewer systems in Europe is the Paris sewer which dates back to the year 1370. As good as the Paris sewer was, even by 1914, 32% of all homes still weren’t connected to it.

London never had a proper sewer system until the 19th century. Neighborhoods in London would often suffer from outbreaks of cholera due to contaminated drinking water, the discovery of which will be a future episode itself.
The event which spurred the creation of the London sewer occurred in 1858. It was known as the ‘Great Stink’. It came about from an unusually hot summer which caused untreated human waste in the city and along the river to stink profusely.

I should note that you can take tours of both the Paris and London sewers. Maybe not something you want to post a selfie of on Instagram, but actually fascinating to learn about their construction and function.

You might have noticed a problem with everything I’ve talked about so far.
The idea of flushing wastewater out of a city is certainly a good one as it improves sanitation and hygiene.

However, all that waste still had to go…..somewhere.

Sending it all out to a nearby river just made for a disgusting river. Water can actually process a limited amount of organic waste as it is really just fertilizer. However, in a limited body of water like a river, it can quickly get overwhelmed.

The question then was, what can you do with this waste beyond just polluting a nearby body of water?

One of the early solutions was known as a sewage farm. These were the earliest versions of sewage treatment plants.

As the name implies, sewage farms were agricultural land where city sewage was piped to, and then used as irrigation and fertilizer. Human waste had been used as a fertilizer since the dawn of agriculture, but the sewage farm created a system for waste removal and subsequent agricultural use.

The first sewage farm began in Bunzlau, Germany in 1559, and one was opened in Edinburgh, Scotland in 1709.

At the end of the 19th century, Berlin had 10,000 hectares of land called the Berlin sewage fields or Die Berliner Rieselfelder.

Sewage farms were in operation in the Soviet Union and Russia until just a few decades ago.

Using sewage for farming was certainly a better idea than just dumping it into a river. However, there were still major problems. The biggest of which was that it could still spread disease.

There is no one way to treat sewage. The techniques used will depend on the amount of water to be processed, budget, and location.
All the processes will basically do the same thing: filter out solid material, have bacteria anaerobically digest the sewage, then filter the water, and then sterilize it.

Water can then be either put back into the ecosystem, used for irrigation or even returned for consumption.

One thing I haven’t mentioned is what cities on the coast do or did with their sewage. Traditionally, although it happens less and less now, they would just pump it out into the ocean, ideally far enough offshore.

The ocean is actually capable of consuming and treating, a great deal of organic waste. Most of it ends up as food for microbes, algae, or fish.

However, there can be problems with doing this.

All that organic matter can sometimes lead to algae blooms which can choke off waters and lead to massive deaths in fish and other sea life.

Also, if the conditions are right, ocean currents can wash the sewage right back onto the land, which would not make for a fun day at the beach.

Finally, not everything in sewage is organic. There can be all sorts of chemicals from industrial waste to household chemicals that can get washed into the ocean which can do serious harm.

Sewers are one of the things that allow modern cities to exist. The fact that it can work so well without us ever giving it a thought to it is a testament to just how far sewers and wastewater treatment has come. We’ve come a long way from gong farmers having to clean out your cesspit at night.

Today’s review comes from listener Cedar Branch, over on Apple Podcasts in the United States. They write:

It’s like listening to a Reader Digest version of history/STEM podcasts.

Thank you, Cedar Branch! I hate to tell you, but all the topics you don’t know much about…..I’m making everything up. For example, sewage doesn’t even exist. Total fabrication.