Wat Hup Ta Khrot temple left an indelible mark on my psyche. Not only because it was the first major temple complex we visited in Thailand, but it also introduced me to Thai polytheism. The idea that different gods and even religions could be worshiped together, side by side in peace and harmony simultaneously baffled and inspired me with their freedom to choose. 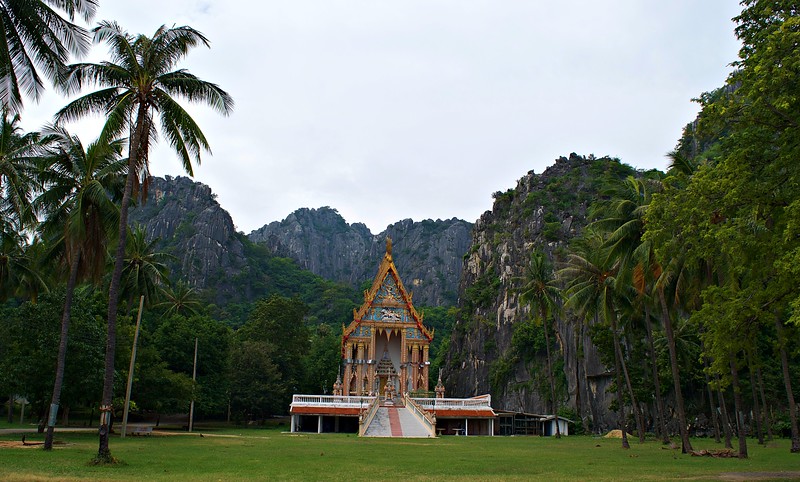 The freedom of choice isn’t limited to this one temple or time, it’s present in all of Thai culture and history. For example, the Unesco World Heritage site of Sukhothai has over 193 temples excavated and restored. These temples have Hindu and Buddhist beliefs living side by side.

Choosing, one or many gods to follow is available from the lowest peasant to the king himself. In the ancient capital Ayutthaya, a popular attraction and UNESCO World Heritage Site, the kings demonstrated Hindu, Buddhist, and local spiritual belief simultaneously. Ayutthaya was named after the Ayodhya, the city in India that is the birthplace of the Hindu god Rama. The Ayutthayan kings were named after incarnations of Hindu gods like Vishnu or Rama, but they were also considered Bodhisattva. Even the ancient kings could be both Hindu gods and still quest to become Buddha. 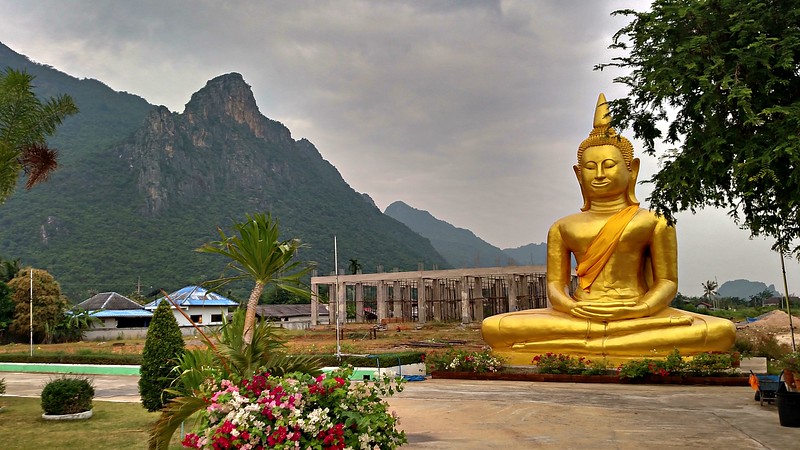 My narrow-minded Western brain had a hard time handling the dichotomy of choice. I thought Game of Thrones taught me everything I needed to know about polytheism. In the show, the kingdoms of the realm worshiped different gods. When strangers enter the land, the kings would chop their heads off and burn them at the stake. This was nothing like Thailand. There we found something completely different, delightful and accepting. There was freedom to choose, not choose, or even choose everything.

That day in the temple complex changed me. We walked by enchanted logs that Thai spiritualists believed housed wood spirits. The believers left ribbons and flowers as an offering to the spirits who lived there. The temple courtyard overflowed with statues of Hindu gods and famous Buddhist monks, each with their own alms box in front. There was even an altar for Rahu who was, in fact, a demon that Vishnu cut in half for drinking the milk of life but, due to the milk’s power, his head and torso were immortal. Not to be outdone, the temple shop sold amulets believed to have magical powers. Literally, this was one stop shopping for all religions in Thailand.

My first thought was amazement at all of these different gods, demons, spirits, monks and even religions living side by side. My second was – how do you choose? I asked our guide – Tick- who replied: “You just choose”. 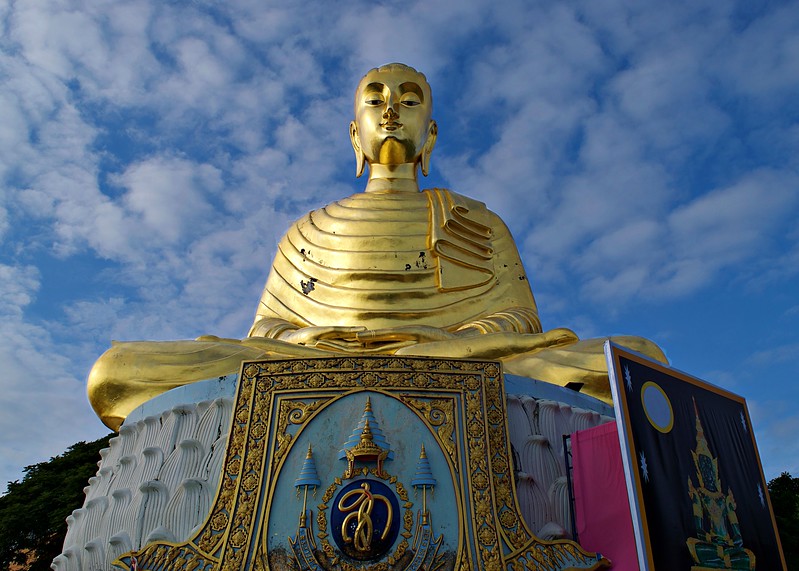 You just choose… What a liberating concept. Then Tick continued – “It doesn’t matter which god you worship because it’s always the same thing. You offer a gift, ask for a favor in return for a promise, and then fulfill your promise.” I struggled to understand how this could be so simple and universal.

I tested Tick’s theory with the one Christian God I grew up with. After all, they are all the same, right? Instead of a donation box in front of each idol, we passed a collection plate in church so there was an offering. Also, in Christianity, there is a long tradition of asking for favors from God. Jesus said in Mark 11:24 “Therefore I tell you, all things whatever you pray and ask for, believe that you receive them, and you shall have them.”

Did we have to make additional offerings in our prayers to God? In Catholicism, your priest might suggest contrition as part of the confession, usually involving some number of hail marys. In all cases, humility and belief are part of the prayer ritual. I was beginning to see what Tick is saying. 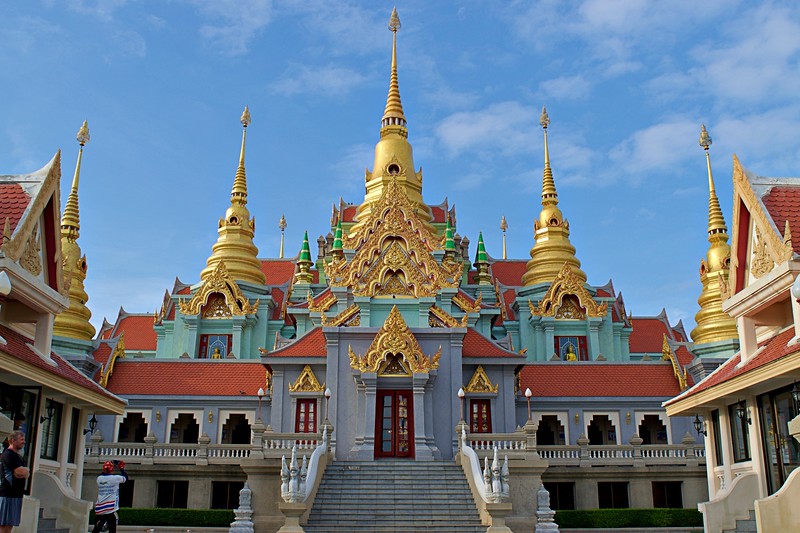 I had more western memories to draw from. After my Christian upbringing, I branched into enlightened spiritualism during my college years. Did I have a prayer ritual there too? Did I follow the same patterns without any gods?

I would set my intention and visualize that intention coming true. Sometimes I would use meditation mantras or intention boards to voice these wishes to the world. Is this like banging a gong at a temple to release your prayers to the world? Maybe there is a pattern here. Maybe Tick is right, maybe you can just choose, but how would a typical Thai person choose their god?

I can’t speak for all of Thailand, but I got to know Tick well during our time with him. Tick operated on many levels. On one hand, he had a high respect for traditional Thai cultures and beliefs. For example, he became a Buddhist monk to please his mother. True, his monkhood only lasted one month, he wasn’t a fan of sleeping on the floor or eating bland food, yet even a month of monkhood made his mother very proud.

Tick also loved western culture. As a teen, he had a pair of designer Harley Davidson jeans from the US that was very expensive and hard to get. He got in a minor motorcycle accident. He was bleeding and needed stitches but he knew the first thing the paramedics would do would be to cut off his jeans. Instead, he chose to skip the hospital and save those jeans. For the next month, he cleaned and bandaged wounds at home, but his designer jeans were safe. 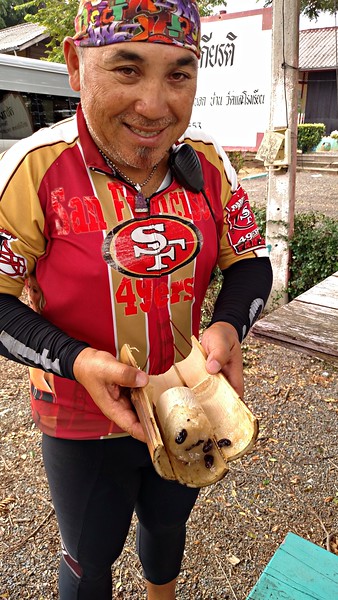 His particular combination of east and west, new and old, gave me another way to understand the freedom of choice. I noticed Tick’s bike jersey he was wearing at the temple. It was a custom-made 49er fan art for Joe Montana saying “Bring him home”. How did a Thai guide, who has never been to America, just choose Joe Montana and the 49ers?

At first, I thought there was a deep, philosophical and football explanation relating to the history of the West Coast Offense. Before Bill Walsh and the 49ers, football was a one on one battle of individual superheroes like Lynn Swann, Franco Harris or Mean Joe Green. They used their physical dominance to win individual battles and sway the course of a game with one immaculate reception.

Walsh, Montana and the 49ers changed all of that. Montana would throw to a spot determined by a weakness in the opposing defense. His receivers, like Jerry Rice, would have to see the same weakness and choose to run to the right spot. It was the system that broke down opposing defenses and when it worked it was unstoppable. The collective teamwork, planning and coordination of the all the pieces led to victory and not an individual battle won or lost

I drew an immediate analogy to Thailand culture and how the collective work and cooperation of the country would bring success and happiness. I was wrong. Tick said Joe Montana looked good and won a lot of football games and that was why he liked him. It was simple, sweet, profound, and got me thinking. 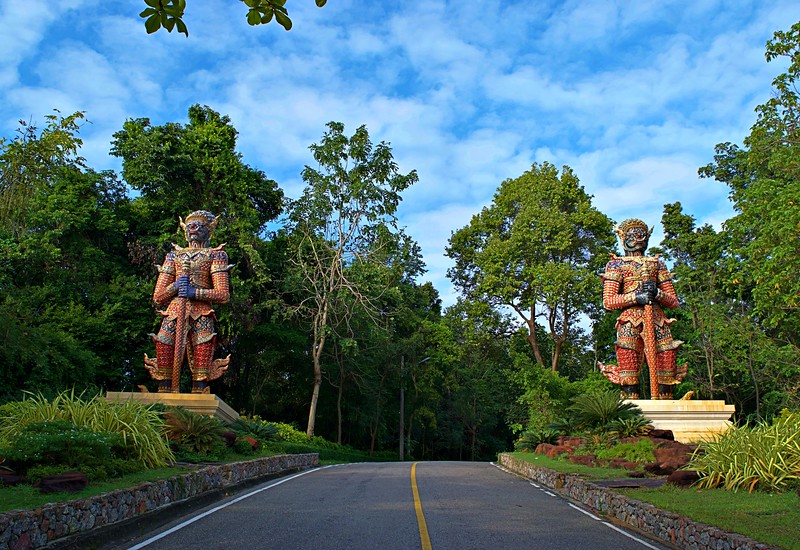 Maybe Thai people picked their gods like we pick our football teams. Sometimes a team or god is on a winning streak and the fans take notice. Other times, they are just your hometown favorites that you grew up with. Every temple we passed in Thailand had a statue of a famous local monk that had made a name for himself for the local worshipers. Other times, you might just like Joe Montana’s blue eyes or Vishnu’s blue skin for pure aesthetics. There is probably a reason why NFL teams work so hard on their logos and Hindu gods are so colorful.

More and more in this world, it seems like there is a tendency to judge people for their personal choices. Perhaps it doesn’t matter which god you pray to or football team you root for. Since, for all intents and purpose, they are the same. There is no reason to not enjoy the pageantry of the NFL or the splendor of an exotic temple, even if it isn’t your team playing or the gods you believe in. Accepting the freedom to choose gives a traveler the ability to enjoy the new and unique without judgment or prejudice, and at the end of the day, isn’t freedom of choice what it’s all about?

This post was written for Everything Everywhere by Ed and Jennifer Coleman of Coleman Concierge.