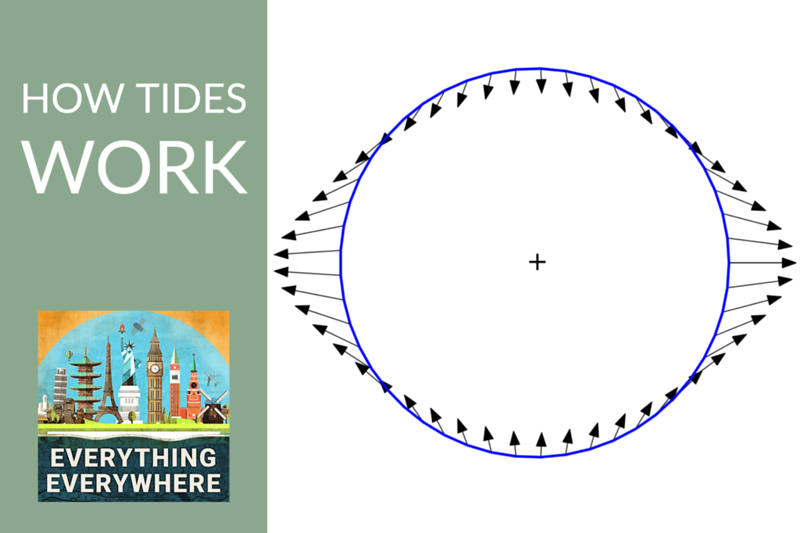 Every single day, the oceans of the world go through a cycle with two high tides and two low tides.
For thousands of years, no one knew why the tides rose and fell, and even today, most people only have a vague idea of what drives the tides.
They dictate the lives of many people who live near the sea, and we might even be able to harness their power in the future.
Learn more about how tides work, and why it is more complicated than you probably think, on this episode of Everything Everywhere Daily.

Humans have been aware of the tides ever since they were aware of the ocean.
However, no one was really sure why the tides came in and out. Most cultures did realize that the tides had something to do with the moon. After all, it wasn’t hard to figure out that there was a high tide when the moon was visible overhead.
Explanations as to how the moon caused the tides were different in almost every culture.
The Yolngu Aboriginal people in Northern Australia believed that the moon would fill up with water and then be emptied into the sea.
In Ancient India, there was a belief that the waters expanded because of the heat from the moon.
Some Ancient Greeks did believe that the moon controlled the tides, but Aristotle was not one of them.
Muslim astronomers in the 12th century created tables of the tides, but they thought it was due to reasons of astrology and in fact, though it proved astrology.
As astronomy became a more serious science, most astronomers still believed the moon influenced the tides. Oddly enough, Galileo was one astronomer who ridiculed the lunar theory of tides. He thought it was due to the rotation of the Earth and its revolution around the sun.
The person who finally got it mostly right was, not surprisingly, Isaac Newton.
So, what exactly is happening with tides. What makes the tides go in and out?