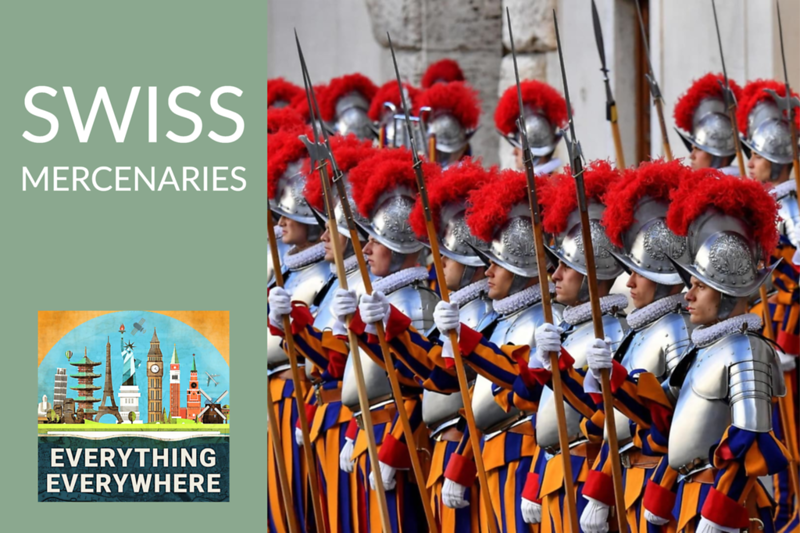 When most people think of Switzerland, they of small country embedded in the Alps that makes fine chocolates and is the home of the cuckoo clock.

They have been neutral in European conflicts for almost 500 years and they serve as the headquarters for several international organizations.

Yet, it was the Swiss who during the Renaissance were some of the most feared and in-demand mercenary fighters in Europe.

Learn more about Swiss mercenaries and how they instilled fear into Europeans, on this episode of Everything Everywhere Daily.

In Shakespeare’s play Hamlet, the King of Denmark Claudius says in Act IV, Scene 5, “Where are my Switzers? Let them guard the door.”
Switzer used to be an old English word used to describe the people of Switzerland.

In the mid-13th century, what we call Switzerland was officially a part of the Holy Roman Empire controlled by the Hapsburg Dynasty.

In 1291, three regions in Switzerland, called cantons, established a confederation for mutual defense. They were given quite a bit of leniency by the Emperor who recognized the confederacy at first.

I should say that by this time, the Swiss had already developed a reputation for being fierce warriors.

The quasi-autonomy that the Swiss Canton had wasn’t to last long. In 1315, Duke Leopold I of Austria invaded Switzerland as part of a larger war over control of the Hapsburg throne.

The size of Leopold’s army has varied greatly depending on the historian you are listening to. High-end estimates place the army at 20,000, but lower estimates place it at around 2,000-3,000 mostly armored knights on horseback.  The most common estimate is around 9,000.
The Swiss were relatively poor. Their soldiers didn’t have expensive armor. They didn’t have a cavalry. The best estimates were that the Swiss had about 1,500 men.

By any measure, not only were the Swiss outnumbered but they were also outmatched. Heavy cavalry was the gold standard for warfare in the middle ages. Yes, there were cases of infantry defeating heavy cavalry, but they were few and far between.

If there were odds in Vegas, the smart money would have been on the Austrians.

In what became known as the Battle of Morgarten, the Swiss routed the Austrians in one of the most improbable victories of the era.

They ambushed them and then tore them apart with their tight formations with pikes and halberds. They also didn’t take prisoners.

Despite their success at the Battle of Morgarten, the Swiss refined their fighting technique by adding more pikemen.

Here I should explain exactly what pikes are and why they were so lethal.
A pike is really just a very long spear. The average pike was about 3 to 7.5 meters or 10 to 25 feet. It was made of wood with a sharp metal tip.

Individually, the pike was a horrible weapon. You’d never use a pike in one-on-one combat. However, when amassed, it became extremely formidable.

The Swiss would form up, usually in a square with rows of pikemen. The pikes were so long that several rows were able to extend their pikes forward at once.
Pikes were devastating to cavalry as well as to infantry. It was the equivalent of attacking a porcupine.

All the pikemen in rows behind would hold their pike upright, waiting to lower it to take their turn.

The use of pike squares totally changed warfare in the late middle ages. It offered a low-cost way for unarmored farmers to defeat expensive heavily armored knights.

This wasn’t actually a novel innovation. It was a rediscovery of a very similar technique used by the ancient Macedonians. The armies of Philip II and Alexander the Great used similar formations with very long spears called sarisas.

It wasn’t just that the pike was a formidable weapon. It was that the Swiss would train together and fight as a unit from each canton. The Swiss infantry was extremely well disciplined. They could perform complex maneuvers in battle which was difficult for any army to pull off.

It was said that a Swiss pike square could run a full speed, yet remain shoulder to shoulder while in formation. They could attack uphill and also switch the direction of their attack at moment’s notice.

The Swiss pikes were extremely effective. There was a series of lopsided victories they had against Hapsburgs who tried to invade. Not only would they win, but they would never take prisoners. They would kill everyone they could get their hands on.

This ferociousness on the battlefield became an incredible deterrent.
The reputation of the Swiss spread rapidly. In the 14th and especially the 15th centuries, Swiss mercenary units, known as Reisläufer, were in extremely high demand, and bidding wars would often erupt between European leaders.
They were hired by the French, Italians, Hungarians, and pretty much everyone else.

Machiavelli wrote about Swiss mercenaries in chapter 12 of The Prince.
One of the appealing aspects of Swiss mercenaries was that they were relatively cheap. They didn’t require expensive equipment or weapons, and the soldiers were mostly farmers.

Moreover, while you could hire individuals or small groups, Swiss cantons would farm out entire units as a source of revenue. You could, in one fell swoop, and hundreds or thousands of highly trained men ready to go so long as you had the money.

Swiss mercenaries weren’t only pikemen, although that was their biggest claim to fame. Over time they adapted their squares to include close combat units in the center of the square, as well as crossbows.

The success of the Swiss pikes of course spawned imitators as all military innovations do. Pike formations became the basis for warfare in the 15th century.

There were also other mercenaries that adopted Swiss tactics, in particular, the German Landsknechts. They copied the Swiss and developed some of their own innovations including the use of the large two-handed Zweihänder swords. These large swords were used to basically break pikes and spread them apart to allow other units to move in.

As pike warfare became ascendant, there would often be battles with just masses of pikemen on each side. These battles became known as the “push of pike”.

“Push of pike” battles were unusually bloody affairs with the winner usually being determined by whoever had the most willpower and stamina, or whoever had the longest pikes.

The peak of the Swiss mercenaries was from about 1450 to 1525, and arguable their greatest accomplishment was fighting for Milan at the Battle of Novara in 1513.

The age of the Swiss mercenary declined quickly in the early 16th century.  The Battle of Bicocca in 1522 was the signal that the times were changing as an army of Swiss mercenaries were defeated, largely due to a new weapon: firearms.

Artillery had been used for quite some time, but now gunpowder weapons were in the hands of common soldiers, and it rendered the pike formation obsolete.
In 1515, Switzerland declared its neutrality. That, together with the changes in military technology, ended the heyday of the Swiss mercenary.

There were individuals and small units that did serve in other European armies through the 18th century, but they never again had the impact that they did in the 15th century.

Now I’m guessing that if you knew anything about Swiss mercenaries before this episode started, you probably knew one thing, and it is something which I haven’t yet mentioned.

It is the last vestige of Swiss mercenaries still in use in the world today, and you might have seen them yourself if you have ever visited Rome.

I am of course talking about the Swiss Guard, who serves as the military force for the Vatican.

The Pope had hired Swiss mercenaries in the late 15th and early 16th century in the various conflicts the Papal States had with various Italian kingdoms and with France.

In 1503, Pope Julius II asked the Swiss for a constant contingent of 200 Swiss mercenaries. The units were paid for by the German merchant Jakob Fuger, who was probably the richest person in the world at this time and had invested heavily in Pope Julius and wanted to protect his investment.

The units entered Rome in 1506, which is now considered the date of the founding of the Swiss Guard.

For the first several decades, they were an actual military force.

The most memorable, and horrible, day in their history occurred on May 6, 1527. The Holy Roman Emperor Charles V sacked Rome. Of the 189 members of the Swiss Guard, 147 were killed in the last stand to protect Pope Clement VII.
The pope managed to escape with 42 members of the guard.

With the end of the Italian Wars in 1559, the Swiss Guard shifted to a role as an honor guard and for the personal protection of the pope.

The number of guards as well as the readiness of the unit has varied greatly over the last 500 years.

By the 1970s the Swiss Guard was purely ceremonial, wearing uniforms very similar to what was worn in the 16th century, and sporting a halberd while on guard duty. The one change is that their helmets are now made of plastic, instead of metal.

Since the assassination attempt on Pope John Paul II in 1981, they have been reformed into an actual security detail similar to the US Secret Service, often wearing plain clothes.  If you ever see guys wearing dark suits with earpieces around the Pope, they are the Swiss Guard.

Even though most people don’t think of the Swiss as being a martial country, there are still remnants of their old military ways in Switzerland today. Military service is compulsory for all males, and there is a very strong militia system with members of the militia storing weapons and gear in their homes. There is also an extensive network of armories and defensive fortifications located all over the country.

If you remember back to my episode on Operation Tanenbaum, Hitler didn’t bother invading Switzerland because he thought the cost would be too high.
All of it dates back to some 13th-century Swiss farmers who revolutionized medieval warfare by learning to fight with very long sticks.

Everything Everywhere Daily is an Airwave Media Podcast. The associate producers are Thor Thomsen and Peter Bennett. Today’s review comes from listener Archie Ward over on Apple Podcasts in New Zealand. He writes:

Awesome podcast review by Archie Ward
“I’ve recently started to listen to this awesome podcast. I think it’s a great educational podcast for people who are curious to know what is and has gone around the world. I’m really enjoying this podcast and hope to see more people writing an awesome review. I’ve learned so much, that I feel like I’m at another school! Keep up the good work “Everything Everywhere daily!” – Archie Ward 12”
Thanks, Archie! I have to say that this podcast is even better than school. For starters, it is only 10 minutes long. Second, there is no risk of getting in trouble with your teacher. Finally, our rugby team has never lost a match.