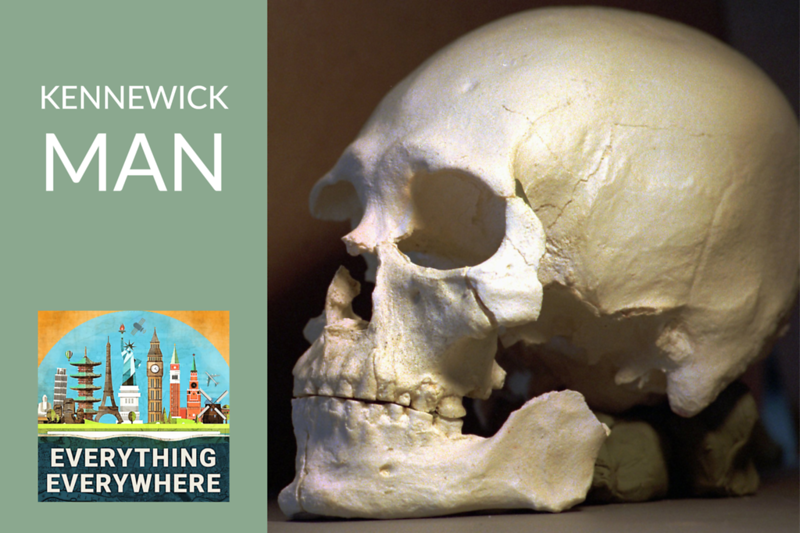 In 1996 two college students walking along the Columbia River in Washington State stumbled upon what turned out to be an ancient human skull.

What they couldn’t have known was that their discovery would lead to a better understanding of how humans came to the Americas, as well as years of scientific, cultural, and political controversies.

Learn more about Kennewick Man and how it roiled the world of paleontology and led to a massive controversy, on this episode of Everything Everywhere Daily.

On July 28, 1996, two college students, Will Thomas and David Deacy were observing hydroplane races on the Columbia River near Kennewick, Washington in the southeastern corner of the state.

On the bank of the river, they came across a human skull which had been exposed by erosion from the flowing water. Assuming that they had stumbled upon a homicide, they contacted the police who then brought in the county coroner.

The coroner went to the site and treated it like a normal case, but he quickly realized that something was wrong. The skull wasn’t…..normal. He suspected that this wasn’t the skull of a recently deceased human.

He called in an archeologist from Central Washington University named James Chatters. Over a period of 10 visits to the site, they managed to collect over 350 bone and bone fragments which were 90% of the full skeleton of an adult human male.

They figured the body was from the 19th century.

They sent a bone fragment to the University of California, Riverside for radiocarbon dating and the results they got back were not at all what they expected.

It was dubbed Kennewick Man, in honor of the town where he was found, or The Ancient One, by the native people in the region.

This discovery and its subsequent announcement set off a firestorm of controversy which lasted over 20 years, and in some areas is still ongoing today.

The first controversy had to do with the custody and ownership of the remains.
Because the skeleton was found on federal property, the Army Corps of Engineers wanted to take possession of the skeleton and stop any further testing or study on it.

The corner claimed that he had jurisdiction as it was a body found within the county.

Overall, this is a very reasonable law and it came about from grave robbers who took sacred objects, artifacts, and human remains.

Several tribes in the region including the Umatilla, Colville, Yakama, and Nez Perce all joined a lawsuit to take possession of the remains so they could be buried properly.

The problem was proving that there was any sort of link to these tribes extending back 9,000 years.

Eventually, a team of anthropologists won a court case in 2004 giving them rights to study the skeleton because the government and the tribes couldn’t prove any sort of kinship. More on that in a bit.

The body was held at the Burke Museum in Seattle where all subsequent studies of the remains were conducted. It was considered a neutral site, and the remains were never put on public display.

This brings us to the second controversy. Who was the person who was found and what was their ancestry?

At the time the remains of Kennewick Man were found, it wasn’t possible to do DNA testing. The techniques to conduct a DNA test on those sorts of remains just didn’t exist yet.

James Chatters, the first anthropologist to see the remains and the person who helped dig it out, claimed that the skull did not look like that of a Native American. In his report, he said that Kennewick Man had “presence of Caucasoid traits [and a] lack of definitive Native-American characteristics”.

However, in an anthropological sense, it is not used to describe skin color, but people with similar skeletal traits from Europe, the Middle East, Central Asia, South Asia, and part of North and East Africa.

Either way, the conclusion of Chatters was astounding. All evidence for the migration of humans into North America have them coming from Asia. Other than a handful of Vikings who made it to Newfoundland, which I touched on in a previous episode, there has never been evidence of humans migrating to North America, especially not western North America, by people with Caucasoid traits.

They actually created a clay sculpture based on the skull and this interpretation, and it looked shocking like….Patrick Stewart. I’m dead serious, you need to search for a photo, but it was as if Jean Luc Picard went back in time and died on the side of the Colombia River 9,000 years ago.

However, Chatters’ analysis was hardly the only one on the origin of Kennewick Man.

Another team of anthropologists was able to study the skeleton and they arrived at a very different conclusion. Joseph Powell of the University of New Mexico compared the skull to other populations of people and concluded that Kennewick Man was most probably descended from Polynesians or the Ainu people of Northern Japan.

His report concluded that the remains were “unlike American Indians and Europeans” and “clearly not a Caucasoid unless Ainu and Polynesians are considered Caucasoid”.

If this were true, this would still be pretty Earth-shattering as it would provide direct evidence of the Asian migration of humans to North America at a time period which didn’t fit the Bering Strait theory.

I should note that there was also a clay model based on the skull and these assumptions and it didn’t look anything like Patrick Stewart.

There was still quite a bit that was able to be determined through analysis of the Kennewick skeleton.

He was right-handed and spent a lot of time engaging in an activity that was probably akin to spearing fish or seals. He had several broken ribs, a fractured forehead, and had taken a spear to his hip with the spearpoint still being lodged in his bone.

He was about 5 feet 7 inches tall, or 170 centimeters, and weighed about 160 pounds, or 72.5 kilograms. He probably died around the age of 40.
Stable isotope analysis of his bone collagen showed his diet was almost exclusively marine mammals, and that he drank glacial meltwater.

Also, he was probably buried on purpose given the position his body was in when it was found.

Debates raged for years about where Kennewick Man originated from. In the end, science eventually settled it.

I mentioned before that at the time the body was discovered, there were no DNA techniques that were able to get a genetic profile from something that old.

That eventually changed, and by 2013 it was possible to once and for all analyze the DNA of the Kennewick Man.

An international group led by the University of Copenhagen did a genetic study and presented the results to the Army Corp of Engineers in 2013. The results of the study were made public in 2015.

The DNA analysis found that the group of contemporary humans most closely related to Kennewick Man was…..Native Americans from the Colville tribe in northeastern Washington state.

The genetic evidence was pretty overwhelming and compelling. Both of the skeletal analyses were wrong. Kennewick Man wasn’t from Europe, Polynesia, or Northern Japan.

If those theories had been proven true, the results would have turned over the world of North American archeology. As it was, the results were still extremely important.

There are only a very small number of human remains dating back this far which have ever been found in North America. The DNA of Kennewick Man supports the theory that at least some early Americans came over the Bering Land Bridge from Siberia.

In December 2016, legislation was passed by the United States Congress to repatriate the remains to a coalition of tribes from the Columbia River Basin, including the Colville Reservation, the Yakama Nation, the Nez Perce Tribe, the Umatilla Reservation, and the Wanapum Band.

On February 17, 2017, the remains were removed from the Burke Museum and given to representatives of the coalition.

The next day on February 18, Kennewick Man, aka the Ancient One, was once again laid to rest 9,000 years after he first died. The ceremony was a private affair attended by 200 representatives of the collective tribes.

Now that the remains of the Kennewick Man have been buried, there is pretty much zero chance that they will be exhumed again for study.

There were plenty of studies done on the bones while they were available for 20 years, and there were casts made of the skull which will be available to future researchers.

The case of Kennewick Man was one of the most challenging in recent years, trying to balance the desires of science and native people. In the end, everyone got something that they wanted, but maybe not everything they wanted.

Scientists were able to study the remains and got important data from them to help us better understand the arrival of humans into North America.
And in the end, the Native American tribes in Washington were able to bury the remains of Kennewick Man according to their customs.

Today’s review comes from listener RitaRac, over on Apple Podcasts in the United States. They write:

Yes, I love it. Exactly what I have been looking for history lesson-wise. Love your voice and your delivery. Thank you very much.