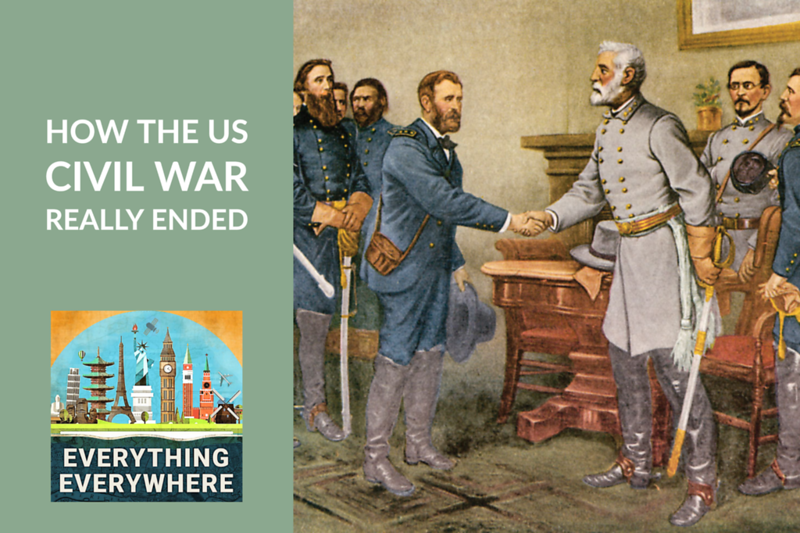 This is a truth, but it really isn’t the truth. At best it could be described as the beginning of the end of the Civil War.

Learn more about when the US Civil War really ended on this episode of Everything Everywhere Daily.

This was certainly the case in the US Civil War. Open hostilities began on April 12, 1861, with the bombardment of Fort Sumter, South Carolina. While there was violence around the issue of slavery for years, the formal fighting between the two sides of the war began on that date at that place.

I often engage in hairsplitting on many of my episodes where make technical distinctions to explain things. However, in this case, it isn’t really a matter of splitting hairs.

The surrender of the Army of Northern Virginia was significant as it was the biggest Confederate army and the war in Virginia was the focal point of the entire conflict. But just because Robert E. Lee surrendered didn’t mean that any other general had to surrender.

Moreover, there was also a slight problem with communication.  Even though there were telegraphs in 1865, they weren’t everywhere.

If some other general wanted to follow the lead of General Lee, they might not even get news of his surrender for weeks if not months.

So, with that, and using the surrender of Robert E. Lee as the starting point, what happened after the surrender and how long did it take for the war to finally, finally end?

Dominos started to fall within hours of Lee’s surrender. Many of them were just pure coincidence.

Down in Alabama, the Battle of Fort Blakely was fought on April 9th while Lee was surrendering in Virginia. Hours later, Confederate Brigadier General St. John Richardson Liddell was captured and he surrendered his forces. He was totally unaware of what General Lee had done.

On April 14th, Abraham Lincoln was assassinated. Word of this spread quickly, but again, not everywhere.

Union General James H. Wilson was leading a raiding party through Alabama and Georgia. He had not heard anything about Lee surrendering or Lincoln being killed. He fought the Battle of Columbus, Georgia on April 16. This has often been called the “Last Battle of the Civil War” but as we will see, it wasn’t.

One part of Lee’s Army was Colonel John S. Mosby who had a unit called Mosby’s Raiders. They were more of a guerilla unit fighting in Northern Virginia. His unit never surrendered, they just disbanded and he sent all his troops back home, fully armed.

I have summoned you together for the last time. The vision we have cherished of a free and independent country, has vanished, and that country is now the spoil of a conqueror. I disband your organization in preference to surrendering it to our enemies. I am no longer your commander. After association of more than two eventful years, I part from you with a just pride, in the fame of your achievements, and grateful recollections of your generous kindness to myself. And now at this moment of bidding you a final adieu accept the assurance of my unchanging confidence and regard.

Because Mosby never surrendered, a bounty was put on his head and he finally surrendered in June.

With the Army of Northern Virginia having surrendered, the next biggest confederate army in the field was the army of General Joseph E. Johnston.

Johnson had approximately 100,000 men under his common, but he saw the writing on the wall. He noted, “With such odds against us, without the means of procuring ammunition or repairing arms, without money or credit to provide food, it was impossible to continue the war except as robbers.”

He began talks with Union General William Tecumseh Sherman on April 17, and Sherman was rather generous with the terms offered. However, it was rejected by Washington, and on April 26, Johnson surrendered to Sherman with the exact same terms Grant gave to Lee.

With both Johnson and Lee having surrendered, that was the majority of the confederate army. There was no realistic hope of any holdouts of winning. From here on out it was a matter of cleaning up all the loose ends.

On May 9th, the now President Andrew Johnson issued a proclamation that the fighting was effectually over. The New York Times on May 9th noted, “President JOHNSON has issued a proclamation, declaring that, whereas armed resistance to the authority of the government in certain States heretofore declared to be in insurrection, may be regarded as virtually at an end…”

The next day, May 10th, the president of the Confederacy, Jefferson Davis was captured.

On the 10th and the 11th, more confederate troops in Florida, Georgia, and Arkansas surrendered.

With the Confederate government gone, Jefferson Davis captured, and most of the military units surrendered, certainly there wasn’t anything left at this point, right?

Well, on May 12th, more than a month after Robert E. Lee surrendered, was the last battle of the Civil War. The Battle of Palmito Ranch.

The battle took place near the Mexican border in Brownsville, Texas. Back in March, Union General Lew Wallace met with his confederate counterparts who occupied the city of Brownsville that it was stupid to fight at this point and that the two sides should establish an indefinite ceasefire.

However, on May 12, Union Colonel Theodore H. Barrett who commanded some forces in the area explicitly went against orders. He wanted “to establish for himself some notoriety before the war closed.” He wanted to take a fort outside of Brownsville, before occupying Brownsville itself. He figured that the confederates wouldn’t put up a fight because everyone else had surrendered.

300 confederates defeated a Union force of 1,700. It wasn’t a major conflict, there weren’t a lot of casualties, and no one had a huge incentive to fight.

There were still some unsurrendered Confederate forces west of the Mississippi.

On May 26, Confederate Lieutenant General E. Kirby Smith surrendered all Confederate forces west of the Mississippi, except for forces in what was then called the Indian Territory, and what is now Oklahoma. However, Smith really didn’t have much of an army to surrender anymore. Almost all of his men left and went home after the news of Lee’s surrender.

Well, the Confederacy had a navy, and a few of those ships were sent out on the high seas to hunt Union vessels. One ship, the CSS Shenandoah, was docked at the island of Pohnpei in Micronesia at the time Lee surrendered.

They had absolutely no clue what was happening back home.

Throughout June and July, they kept attacking and taking American whaling ships in the Pacific.

On August 2, they encountered a British ship when they got confirmation that the war had ended, and the Confederacy was no more. They were located in the Pacific Northwest when they got the news and were on their way to raid the port of San Francisco.

As they had attacked Union ships after the war ended, the captain feared he would be tried for piracy and hanged if he were to surrender in an American port. Rather than going to San Francisco, they steered clear of land and went all the way around Cape Horn in South America, and sailed all the way up to Liverpool.

On November 6, almost 7 months after the surrender of General Lee in Virginia, the last confederates surrendered…..to the Royal Navy.

This isn’t to say everything was peaceful. Reconstruction was a painful period in the South for bitter defeated Confederates and freed slaves who had to bear the burden of their resentment.

It wasn’t until August of 1866, almost a year and a half after the surrender at Appomatox Courthouse that President Andrew Johnson officially and legally ended the war when he signed a proclamation “Declaring that Peace, Order, Tranquillity, and Civil Authority Now Exists in and Throughout the Whole of the United States of America.”