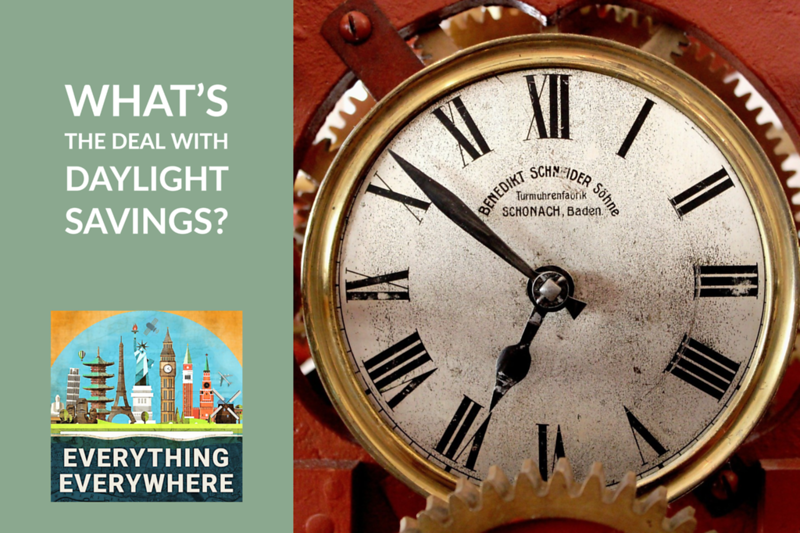 Every year, around this time, people who live in northern latitude countries turn their clocks ahead one hour. Then, months later, we do the exact same thing in reverse, setting all of our clocks back.

Why do we do this? Is there a good reason for it? Should we continue to do it?

Learn more about the history and future of Daylight Savings Time on this episode of Everything Everywhere Daily.

This episode is sponsored by Everything Everywhere Tours.

Yep, that’s right. I’ve done dozens of episodes now talking about interested people, places, and things. Wouldn’t you like to see some of these things yourself?

That is what I’m going to offering my listeners the ability to see some of the most historic cities in the world, in a way in which few people ever get to see them.

Obviously, there are issues with traveling right now, so stay tuned at the end of the show for more information about the tours and what I’m planning.

I’ve done episodes in the past on the history of timekeeping and on time zones, both of which brush against the subject of daylight savings time, but didn’t really deal with it directly.

For those of you who might live in an area that doesn’t use this practice, it’s actually pretty simple. During the warmer months, you advance your clocks ahead by one hour to take advantage of the extra daylight in the evenings. When it gets colder, and the days get shorter, you move it back one hour.

If you live somewhere which is close to the equator, there really isn’t much need for it because the length of your days doesn’t change that much throughout the year.

If you live in an extreme northern latitude, it also doesn’t matter too much because your days are so extreme. Winter is mostly all dark, and summers are mostly all light. Changing the clocks doesn’t really matter.

For people whose day follows the sun, like a farmer, it also doesn’t really matter because if you have to milk the cows at sunrise, it doesn’t matter what time sunrise is.

So, why do we do this then? What is the benefit?

Many people say that the originator of daylight savings was Benjamin Franklin. This however is not quite true. What he did do was lampoon the French and suggested they wake up earlier so they could save money on candles by not staying up so late at night.

There were recorded examples of groups in Spain that would change the times of meetings in the summer to take advantage of daylight, but they weren’t changing the clocks. They just changed the time when meetings took place.

There wasn’t really even a need for adjusting the clock for most of human history because we didn’t have accurate clocks and very little was dependent on clock time as opposed to the sun.

This changed with the development of the railroads. You can listen to my previous episodes about time zones, but suddenly cities far apart needed to be on the same time, and being punctual became a bigger issue.

As the world became electrified and industrialized, energy became an issue. People began using artificial lighting in the evening, and that used energy. In the early 20th century, lighting was a large percentage of all electricity consumed.

The idea was hatched that if we were to adjust the clocks in the summer, people could use daylight for another hour in the evening, and that would mean an hour less of artificial lighting.

It should be noted there wasn’t any data to support this hypothesis, it was just an idea.

The first person who proposed a daylight savings time was New Zealand entomologist George Hudson. That’s entomologist, as in someone who studies bugs. He proposed a 2-hour plan which would allow him to collect bugs after work.

The first places to ever adopt a daylight savings plan were the towns of Port Arthur and Fort William, Ontario in 1908. Today, they are known as the City of Thunder Bay.

The first country to formally adopt a daylight savings plan was Germany in 1916. During World War I, they had to conserve resources for their war effort, so they adopted daylight savings in an attempt to do that.

Within a year, most of the other countries in Europe, on both sides of the conflict, had adopted daylight savings In 1918, the United States adopted it for the first time.

Daylight savings was abandoned in the US as soon as the war ended. It was very unpopular with farmers who didn’t have jobs that were dependent on the clock, but rather the sun. In 1919, a big part of the United States was still rural and worked in agriculture.

Daylight savings was brought back to the US in 1942 during World War II. President Roosevelt simply called it “War Time”.

After the war, everything in the US was chaos because every locality was deciding whether or not to observe daylight savings.

In 1966, the federal government stepped in to solve the confusion. They passed the Uniform Time Act which stipulated that states could do whatever they wanted, but the whole state had to either observe or not observe daylight savings as a unit.

The act also set the timing of daylight savings so everyone was on the same page. It would begin on the first Sunday of April and end on the last Sunday of October.

In 2007, the United States expanded the length of daylight savings by a month, starting two weeks earlier and ending two weeks later. That is the scheduling we still used today.

Today, most countries that use daylight savings are in Europe or North America, with a handful in the Middle East. There are only 4 countries in the southern hemisphere that have adopted it. New Zealand, Paraguay, Chile, and the southern states of Australia.

But let’s go back to the original intent of daylight savings. It was supposed to conserve energy. Does it actually do that?

As I noted before, the idea behind daylight savings was just that. It was an idea. It seemed like it made sense, but there really wasn’t any hard data to support the fact that it worked.

Well, the data has been coming in, and the data isn’t looking for good for daylight savings.

Other studies have shown a marked increase in suicides, strokes, heart attacks, workplace injuries, car crashes, and emergency room visits when daylight savings starts in March There is even evidence that judges hand down harsher sentences.

Basically, you have hundreds of millions of people who are all simultaneously suffering from a very mild jet lag.

So maybe we should get rid of daylight savings, right?  The problem is, there is no consensus as to what we should do.

A 2019 survey conducted by the Associated Press and the National Opinion Research Center showed that opinions were really split on what should be done.

40% of people didn’t want daylight savings at all and thought that we should keep standard time year-round.

31% of those surveyed thought we should keep daylight savings year-round.

28% wanted to keep the status quo.

Basically, anything we do would anger the majority.

The funny thing is, the Gallup Organization has been polling Americans on this subject since 1943, and there has never been a majority of people who supported daylight savings.

The biggest problem with daylight savings seems not to be which time we pick, but the fact that we change the time every year.

In 2020, the Yukon Territory in Canada sprung their clocks ahead one hour in March…but then they never turned them back. They are now on permanent daylight savings or just mountain standard time.

As of right now, there isn’t any plan to do anything about daylight savings one way or another.

So it seems that daylight savings time will be one of those things like getting rid of the penny. Everyone agrees should be changed, but never does.

I’ve traveled a lot and I’ve been on quite a few tours with tour groups. The way they normally work is that you spend a few days in one city, and then go to the next city, and so on.

There is nothing wrong with this, but I’ve been thinking of what I could offer that would be different.

In the course of researching many of the episodes I’ve done, I kept coming across interesting things, many times in cities I’ve already visited. I made a mental list of all the things to see the next time I go back, and eventually, it dawned on me, that many other people would like to see these things too.

For example, in Rome, most people see the Colosseum and the forum, the Trevi Fountain, and the Vatican. There might be some other things, but they hit the highlights and move on. However, few people bother to visit Ostia Antica, the old port city of Rome, or Hadrian’s Villa, just outside of town in the hills. Or the necropolis under the main altar of the Vatican, or Nero’s Palace, or the catacombs around Rome, or the 2,000-year-old sewers under Rome.

Basically, do an incredibly deep dive into the history of a single city. Unpack your bags once, and get tours of these places with genuine experts with PhDs in the fields of archeology, history, and art.

A tour for the true geeks who love culture, art, and history.

So far, I’ve identified three cities that would be good candidates for this type of tour: Rome, Istanbul, and Jerusalem.

The tours will be quite small. Only 8 to 10 people max. If there is more demand, I’ll just do a second tour and do them back to back.

Obviously, given conditions around the world right now it would be impossible to set dates for a tour, and without dates, you can’t set a price, and no one can commit to anything without that.

But, if this is something you might be interested in, go to Everything-Everywhere.com/tour/ just leave your email address, and I’ll notify you when I know more information and conditions are such that it is possible to actually commit to a date, and this might not happen until 2022.

Once again, go to Everything-Everywhere.com/tour/

You can also click on the link in the show notes.