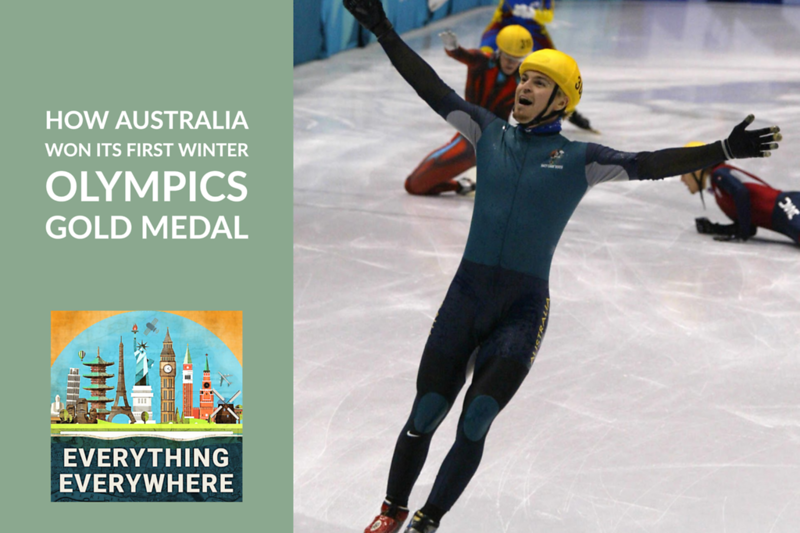 Australia is what I would call a sporting country. Cricket, rugby, and Australian Football are all incredibly popular sports.

Australia has also really punched above its weight in the Summer Olympics, earning an oversized number of medals given its population.

Their performance at the Winter Olympics, however, has not been so great.

Learn more about the extremely unlikely way that Australia won its first Winter Olympics Gold Medal on this episode of Everything Everywhere Daily.

Today I want to tell you about my other podcast. Yes, believe it or not, this isn’t my only podcast, nor is it my first podcast.

I also co-host a show called This Week in Travel. We’ve been doing it for almost 12 years, and over that time I’ve recorded the show from dozens of countries all over the world.

We have recently relaunched the show after a hiatus in 2020 due to the pandemic, but we are back and better than ever.

The show has interesting guests from all over the world, as well as travel news from the week, and great tips to help you on your next trip.

If you love to travel and want another dose of Gary every week, just search for This Week in Travel wherever you listen to podcasts.

Once again, that is: This Week in Travel.

As I mentioned above, Australia is a pretty good country when it comes to sports. At almost every Summer Olympics they rank amongst the top countries when it comes to medals per capita, and the only reason they don’t rank higher is that when one tiny country wins a single medal, the math makes it impossible for almost any country to do better.

However, Australia is not what you would call a winter wonderland. Almost half of the country is located in the tropics, and the rest of the country is still pretty warm. While many Australians will be quick to point out that the country does in fact have some ski resorts in the mountains between Sydney and Melbourne, it isn’t like Canada where literally have people playing hockey on their $5 bill.

That being said, Australia has had some competitors in the winter Olympics over the years. They had their first competitor at the 1936 Winter Olympics in Germany. After that, they would send small contingents, usually with under a dozen competitors, but sometimes as many as 30.

The results were nothing to get excited about. For decades, the Australian winter Olympians had nothing much to show for their efforts. From 1936 to 1992, a fifty-six-year period,  Australia had 134 entrants in the winter Olympics with zero medals to show for it.

In 1998, the bronze train kept-a-rolling when Australia came home with its second bronze medal, this time in an alpine skiing event, the women’s slalom.

As the new millennium dawned, Australia clearly was established as one of the world’s most middling bronze medal winning winter Olympics countries.

The big question was if Australia could get to that next level, and actually bring home a silver……or, heaven forbid…..a gold.

Here I have to take a detour from talking about Australia and winter sports to talk about one sport in particular, and the sport which will be relevant in a moment, short track speed skating.

In traditional speed skating, only two competitors are on the track at a time. The track is an elongated oval, and each competitor stays in their own lane. There is no contact and its more akin to running in a track event. In fact, a speed skating track is 400 meters long, which is the same basic length of a running track.

Short-track speed skating is very different. The track is much smaller and designed to fit in a hockey area. There are no lanes. Moreover, instead of just two competitors, there are usually between four to six all racing at the same time. There is a lot of contact and jostling for position, and it is all being done on ice.

The thing which short-track speed skating is known for is incredible crashes. If someone falls down going around a curve, they can take everyone else out with them, especially if they are on the inside of the curve.

Think of a massive NASCAR crash, but instead of cars, it’s people wearing ice skates and tight lycra racing suits.

This is where I now introduce Steven Bradbury.

Going into the 2002 Winter Olympics in Salt Lake City, Bradbury was probably Australia’s greatest short-track speed skater. He was on the 1994 5,000 m relay team that won Australia’s first medal.

The 2002 Olympics were his fourth and final Olympics. While he had always been considered a possible contender for an individual medal in past Olympics, he never won anything. In 2002, he was not on the list of favorites.

The 1,000 meters was the last short track speed skating event of the Olympics and would be Bradbury’s last Olympic race.

In the preliminary heat, he actually won against a pretty weak field. Of the 16 men who qualified for the quarterfinals, his speed was decidedly in the middle of the pack.

In the quarterfinals, his incredible lucky streak began. In each quarterfinal race, there were four competitors, and the top two would advance to the semi-finals. In his heat, the runner-up was Marc Gagnon from Canada, who was also the gold medalist in the men’s 500 meters and the bronze medalist in the 1500m. However, he was disqualified, thereby allowing the third-place finisher to advance.

The third-place finisher was Steven Bradbury.

Most people assumed that Bradbury’s luck would run out in the semi-finals. He was in a heat with 5 competitors and only the top 2 advanced to the finals.

For most of the race, he was dead last. However, on the last lap, three of the skaters wiped out allowing Bradbury to coast across the finish line in second place, allowing him to advance to the finals.

No one gave him a chance.

From the starting gun, Bradbury was in last. In fact, the camera had to pan out to even get Bradbury in the frame for most of the race. It was four men jockeying for position and Bradbury far behind the rest of them.

But, as I mentioned before, this is short-track speed skating. Things can happen in this event that can’t happen in any other sport.

On the very last turn on the very last lap, four of the five skaters wiped out. Bradbury was so far behind that he avoided the pile-up and went on to coast over the finish line in first place.

Australia, in the most improbable way possible, had won a Winter Olympics Gold Medal.

Not only did Australia win its first Winter Olympics Gold Medal, but it was the first gold medal ever won by anyone from the Southern Hemisphere.

It wasn’t the only gold medal won by Australia in 2002. Alisa Camplin won gold in Aerial Skiing. The Aussies also won a gold medal in 2006 and two more in 2010.

The nation of Australia has so far won five gold medals which matches the total number of gold medals won by Eric Heiden in just 8 days at the 1980 Winter Olympics in Lake Placid.

Bradbury’s improbable win has turned him into a bit of a folk hero. In Australia today, the phrase “doing a Bradbury” can be used when someone experiences unexpected success.

After the Olympics, he appeared on an Australian postage stamp.

Steven eventually retired from the sport in 2005 and wrote a biography. The name of the book? Last Man Standing.

What is the lesson we can take from Steven Bradbury?

If you want to finish first, first you have to finish.