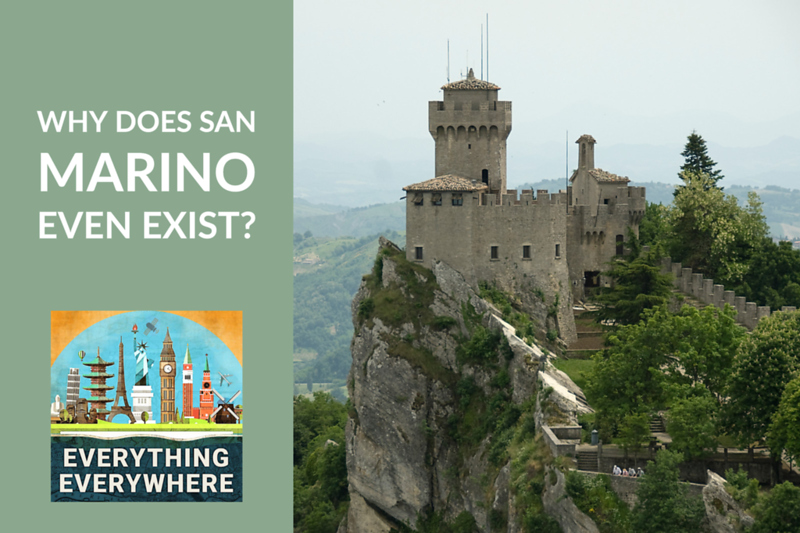 The country of San Marino is one of the smallest countries in the world. It is completely surrounded by Italy, is about 24 square miles in area, and has a population of about 33,000 people.

The most interesting thing about San Marino is the fact that it exists.

Why didn’t San Marino get sucked into Italy like every other city-state on the peninsula?

Learn more about tiny San Marino and why it still exists in the 21st century on this episode of Everything Everywhere Daily.

The official name of San Marino is the Most Serene Republic of San Marino. The word “serene” in this context doesn’t refer to calmness or stability. It is an archaic usage that refers to sovereignty. “Most serene republic” was actually used by other Italian city-states in past including Venice, Genoa, and Lucca.

This interesting factoid about the name of a country does raise an interesting question. Venice, Genoa, and Lucca are all now part of Italy. They were all larger, richer, and more powerful than San Marino.

In fact, every city-state, duchy, kingdom, and even papal fiefdoms on the Italian peninsula are all now part of Italy…..except for San Marino.

So, what is so special about San Marino? Certainly, there were many points in history where tiny San Marino could have easily been overrun by any number of states in, or who came through, Italy.

Yet, this tiny republic has managed to stay independent into the 21st century when nothing else around it has.

The story of San Marino dates way back to the Roman Empire….as does pretty much everything in Italy.

According to the legends, in the year 301, a stonemason named Marinus fled there. Marinus was a priest and he fled to Monte Titano to build a monastery and live as a hermit. A community soon developed around that monastery on the mountains.

He was eventually was declared a saint and the country was named after his Italianized version of his name: San Marino. The official date for the founding of the country is September 3, 301.

San Marino’s biggest asset early on was its geography. It is basically centered on a mountain with three tall peaks. That made it easy to defend, hard to attack, plus there wasn’t a whole lot there to take. There were no valuable resources or trade routes that made San Marino an attractive target.

Even during the medieval period when there were many smaller states filling in the map of Italy, San Marino was still really small in comparison. They just kept to themselves, stayed out of the political games of the region, and were mostly left alone.

That isn’t to say they never had issues.

In 1503, Cesare Borgia occupied the country for six months. His father was Pope Alexander VI and when he died, his replacement Pope Julius II had the troops withdraw.

In 1543, Fabiano di Monte San Savino, a nephew of Pope Julius III tried to invade, but he and his troops ended up getting lost in the fog. The Sanmaranise attributed it as a miracle.

Eventually, the states in Italy began growing in size. In 1625, the Papal states eventually acquired all the land surrounding San Marino, which began its life as an enclave. Here I’ll refer you to my episode on exclaves and enclaves.

In 1739 the country was occupied by a force from the Papal States under Cardinal Giulio Alberoni, but the occupation was ended just 5 months later under the direct orders of Pope Clement XII.

It was at the end of the 18th century and the beginning of the 19th century when modern Italy, and Europe for that matter, began to take shape.

Probably the biggest event during this period was the invasion of Italy by Napoleon. Fun fact: Most people aren’t aware that Napoleon wasn’t born French. Corsica at the time of his birth was Italian. He didn’t learn to speak French until he was 13 years old.

When Napoleon invaded Italy, he rewrote the map. San Marino wouldn’t even be a speed bump to his army if he wanted to take the country.

Things came to a head on February 5, 1797, when the regents of San Marino received a letter from French General Alexandre Berthier. Supposedly the bishop of nearby Rimini was being sought by the French, and he had fled to San Marino.

The response of San Marino here had to be delicate. If they didn’t hand the bishop over, the French would just waltz in and occupy the country, and that could be the end of San Marino.

Likewise, they didn’t want to antagonize the Pope and the Papal States by handing over the bishop.

What the regent at the time, Antonio Onofri, did was give Napoleon all his support, but let the bishop flee across the border into the Papal States.

Napoleon really liked Onofri and promised to leave San Marino independent. Not only did he do that, but he also offered them more territory if they would like it, but Onofri declined. He is reported to have said, “wars end, but neighbors remain”. He knew if they took the territory of their neighbors now, they would have to confront them later on.

Basically, San Marino escaped the wrath of Napoleon just because he personally liked the leader of the country.

Napoleon also made the citizens of San Marino exempt from all taxes and gave them a huge supply of wheat. He was just a big San Marino fanboy.

After the fall of Napoleon, at the 1814 Congress of Vienna, Onofri managed to establish good relations with all of the major players and most importantly with Pope Leo XII, who, “assur[ed] them of his friendship and renewing the ancient conventions with them”.

San Marino managed to thread the eye of the needle during the Napoleonic era by being friends with everyone, and a threat to no one.

The next big event which threatened the sovereignty of the country was Italian Unification. This was the movement that gobbled up all of the various political units on the Italian peninsula and created the modern country of Italy that we know today.

The Austrian Empire and the Papal States were the two big players at the time, and tiny San Marino again had to balance themselves between them.

The Italian unification movement was led by Giuseppe Garibaldi. In 1849, his troops surrounded by Austrians, he sought refuge in San Marino, which was granted. They had provided support for other Italian fighters before.

Offering support and aid to Garibaldi won themselves no favors from the Austrians or the Papal States. The Austrians eventually entered the country and went house to house looking for Garibaldi’s men, but they had snuck out and headed to Venice.

When Italy was eventually unified under the new Kingdom of Italy, Garibaldi didn’t forget what San Marino had done for him. He honored their requests to remain independent and was given honorary citizenship, which he treasured. He said of his citizenship, “I thank you for the present which will always remind me of the generous hospitality of San Marino in a moment of extreme danger for me and for Italy”.

This was formalized in a treaty with the Kingdom of Italy in 1862, where both countries formally recognized each other.

In 1861, San Marino was recognized by the United States by US President Abraham Lincoln.

In the 20th century, threats to their independence didn’t end. In World War I, Italy entered the side of the allies. San Marino, as usual, stayed neutral, which angered the Italians. They thought that they might be harboring Austrian spies.

They got out of this jam by remaining neutral but having 10 individual citizens of the country volunteered for the Italian Army to serve in medical units.

The fascist wave that swept Italy in the 1920s didn’t escape San Marino. Soon after the Fascist Party in Italy came to power, so too did the Sammarinese Fascist Party come to power in San Marino. Here again, because they had a government sympathetic to Mussolini, they were probably saved.

Not surprisingly, the Sammarinese Fascist Party lasted as long as the Italian Fasci party, down to a few days.

When the Germans occupied the northern half of Italy near the end of the war, they gave notice to San Marino that they would try to avoid an occupation, but if the military objective demanded it, they would do so.

After World War II, San Marino went in a totally different direction from their previous government and became the first and only country ever to elect a communist government. This after having an elected fascist government.

Today, San Marino is an independent country with diplomatic relations with most of the world. They are a member of the United Nations, but they are not a member of the European Union. Nor are the members of the Schengen Zone, which allows for passportless travel between European countries, but they do have an open border with Italy.

San Marino isn’t technically in the Euro Zone, but they do use the Euro as its currency, and have an agreement with the European Central Bank, and can issue a small amount of Euro coins.

The easiest way to visit San Marino is to take the train to Rimini and then take a bus about 20 miles to San Marino. You can easily explore the entire country on foot in a day.

The Popes humored them, Napoleon liked them, Garibaldi thanked them, and Moussilini sympathized with them. All of these things have allowed this 1,700-year-old tiny republic to survive into the 21st century.

It’s the only daily podcast where I always download and listen every evening without checking the day’s subject. I know from weeks of experienced that I will enjoy and be fascinated by the content.

Thank you for the vote of confidence David, however, you might want to watch the show titles. Someday I just might upload 10 minutes of fingernails on a blackboard just to keep you on your toes.

Remember, if you leave a five-start review, you too can have your review read on the show.