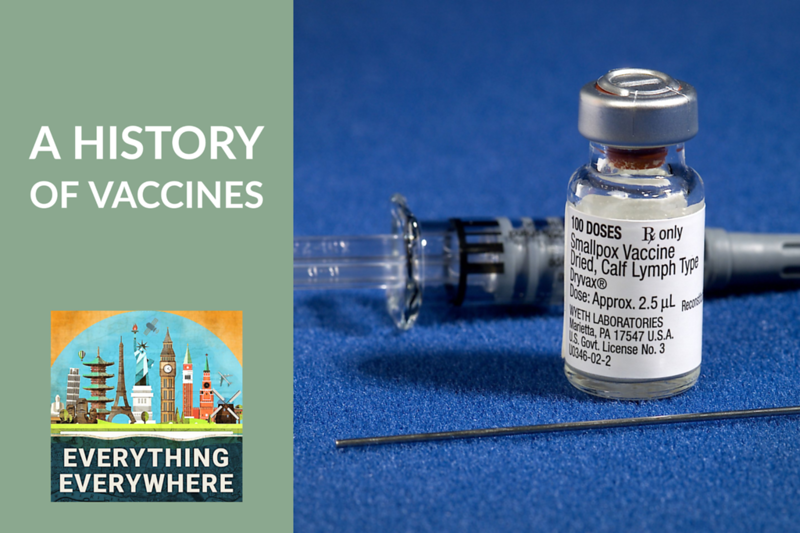 Right now vaccinations are all over the news. There are many companies that have developed vaccines for COVID-19 and there is a good chance that most people in the world will wind up getting a vaccine in the next year or two.

Many of you may never have given much thought to what is a vaccine? How do they work, and how were they developed?

Well, there are answers to those questions.

Learn more about the history of vaccines and how they work on this episode of Everything Everywhere Daily.

If you live in the Northern Hemisphere it is finally spring. That means you might be putting your winter coats into storage and wearing lighter jackets. Well, if you are looking for some great spring gear, you owe it to yourself to check out the selection at Scottevest.

Scottevest gear is some of the most functional and useful clothing on the planet, and it looks great too. Once you wear it, you’ll wonder how you ever got along without it.

To begin to understand vaccines, let’s just start right off with the dictionary definition. A vaccine is:

A preparation of a weakened or killed pathogen, such as a bacterium or virus, or of a portion of the pathogen’s structure that upon administration to an individual stimulates antibody production or cellular immunity against the pathogen but is incapable of causing severe infection.

So, basically what a vaccine does is put a dead version of a harmful virus or bacteria in your body such that your immune system can recognize it and fight it off in the future. However, because it is dead, it won’t transmit whatever illness is associated with the microbe.

Normally, in order for your immune system to develop an immunity to something, you first have to catch it. The problem with that is pretty obvious. If you catch some illness, then you will suffer from it which runs the risk of long-term complications and possibly death, depending on the illness.

Humans first noticed this effect before they knew of the existence of bacteria and viruses.

This first became evident with smallpox. I did a previous episode on smallpox so I’ll refer you to that episode, but suffice it to say that smallpox was probably the worst disease in human history when it came to total deaths.

Something people realized early on was that if you had smallpox and survived, you never got it again. They eventually extended this concept by infecting people on purpose so they wouldn’t get a worse form of the disease.

They would do this by often using scabs from smallpox patients and then rubbing it into an open wound, or breathing it in the form of dust. This technique developed in China and India and then spread to Europe in the early 18th century.

Eventually, people realized that young women who worked on dairy farms who contracted cowpox would develop immunity to smallpox. Cowpox is a virus that is related to smallpox but isn’t nearly as lethal.

This process was formalized and tested in 1896 by English physician Edward Jenner. He took cowpox and purposely inoculated patients with it. He then later exposed the same patients to smallpox, and they developed no symptoms.

Historian Donald Hopkins noted, “Jenner’s unique contribution was not that he inoculated a few persons with cowpox, but that he then proved [by subsequent challenges] that they were immune to smallpox. Moreover, he demonstrated that the protective cowpox pus could be effectively inoculated from person to person, not just directly from cattle.“

The word vaccination stems from the Latin word for cow, vacca.

By the late 19th century, the general technique of inoculating people spread to diseases other than smallpox.

The biggest advances came from Louis Pasteur, the same guy who developed pasteurization and the person from whom the name is derived.

Pasteur developed vaccines for anthrax, rabies, and chicken cholera. He also began to use the word vaccine in a more generic sense to honor the work done by Edward Jenner.

It is hard to express just how big of advancement vaccines were. Infectious diseases were the biggest killers in humanity since the agricultural revolution and the rise of civilization.

Finally, humanity had a weapon to fight these diseases, and in some cases, totally eradicate them.

The 20th century saw even more vaccines developed to combat even more deadly diseases. Measles, mumps, rubella, and diphtheria all had vaccines that were so successful, most people don’t even know what those diseases are anymore.

Not every disease had vaccines that were created so easily.

In the 1950s there were polio epidemics in the United States. The problem was so acute that when a polio vaccine was developed by Dr. Jonas Salk, he became a media sensation.

Thanks to the polio vaccine a disease that once infected millions of people each year, including my own father, and often caused lifetime disabilities, has been almost totally eradicated.

As of 2021, there have only been 2 cases of polio recorded in the wild, one each in Pakistan and Afghanistan.

Polio may soon join smallpox on the list of human diseases which have been completely eradicated.

Because so many diseases have either been eradicated or have had infection rates dramatically reduced, many people no longer recognize the important role that vaccines play, because they no longer see the diseases around them.

Vaccinations have not been created for every disease.  Some diseases such as malaria, HIV, and herpes have been elusive and effective vaccines haven’t been developed for them.

Of course, the vaccination which everyone is talking about now is for COVID-19.

At some point, when all of the dust has settled and we have a more complete picture, the story of the development of the COVID-19 vaccines will make a future episode.

As of right now, we can say a few things about the various vaccines which have been developed.

First, this was far and away the fastest vaccine development that the world has ever seen. Vaccines for other diseases often took years if not decades to develop. This was all done in the span of about a year.

Many people take for granted how science works and they assume that you can just snap your fingers and make a vaccine. To create something both safe and effective, in a single year, is amazing.

Second, all of the COVID-19 vaccines are based on something called mRNA. If you have ever seen one of the images of a coronavirus, it looks like spikes coming out of a ball.  The COVID vaccines take a small part of the DNA in the spikes to make the basis of the vaccine.

This is a much more advanced and sophisticated technique compared to earlier vaccines which just used dead or weak versions of an entire virus.

This technique of using bits of RNA or DNA might be the future of vaccine development.

There are still several major diseases for which vaccine research is in development (although much of this has taken a backseat in the last year due to the COVID crisis).

The biggest need is probably malaria, which still afflicts millions of people each year. There was a malaria vaccine approved in 2015, but the problem is that it has a very low efficacy. Efficacy is the percent reduction of the disease in the people vaccinated compared to the rest of the population.

There is still a lot of work to be done to create a viable malaria vaccine and we are still not close to eradicating the disease.

Some researchers have been working on a universal flu vaccine. Every year new vaccines are developed against new mutated strains of the flu which pop up. That is why people are asked to get flu shots every year.

The idea behind a universal flu vaccine is that it would cover every flu mutation by targeting the things they have in common. It is a very difficult problem, but one that could have enormous impacts if it can be solved.

There are also researchers working on vaccines for the Zika virus as well as HIV.

Vaccines are odd things. Most of us get them when we are so young that we don’t even remember getting them. Unlike other inventions, the benefits of vaccines aren’t found in things that surround us, like light bulbs, but rather in the absence of things that harm us.

The fact that we no longer have to worry about diseases like smallpox, polio, or rubella is a testimony to the power of vaccines.