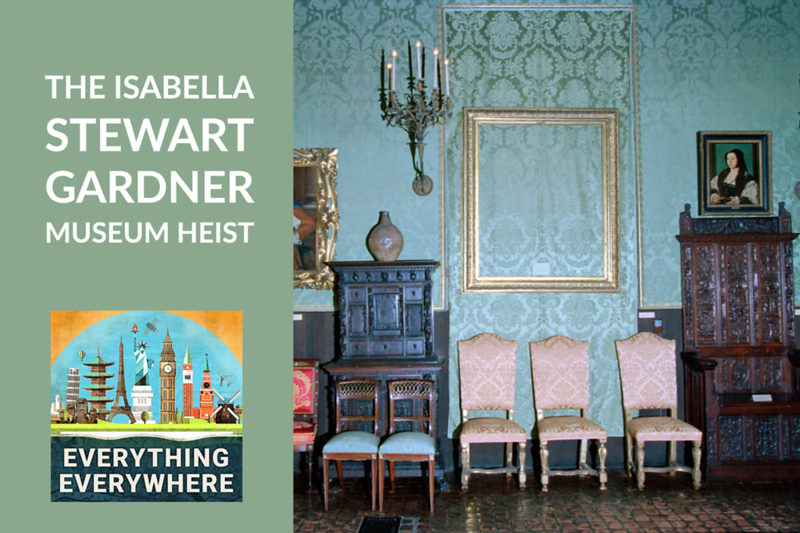 In the early hour of March 18, 1990, two police officers enter Boston’s Isabella Stewart Gardner Museum. The problem was, they weren’t police officers. They were thieves.

In a little over an hour, they stole 13 valuable works of art which had a combined value of over $500 million dollars.

It was the largest robbery in American history.

Learn more about the Isabella Stewart Gardner Museum heist on this episode of Everything Everywhere Daily.

If you love art or you want to be a better artist, then you will love all of the art classes which are available on Skillshare.

They have online courses available on almost every variety of fine art. They have stuff on drawing, painting, sculpture, woodcarving, ceramics, and paper mache.

Go to Everything-Everywhere.com/skillshare to get a free 2-Week trial of Skillshare premium.

She was a very wealthy woman who lived in Boston and had a very large art collection. She was known to be a very eccentric woman who would flout the upper-class conventions of the Boston elite. She famously showed up to a concert of the Boston Symphony Orchestra in 1912 with a white headband that said “Oh, you Red Sox”.

That was a really big deal at the time and caused much clutching of pearls and fainting.

She traveled extensively around the world and purchased art wherever she went.

She established the museum in 1903 and worked with the museum to curate its collection for 21 years until her death in 1924 at the age of 84.

She left the museum $3.6 million dollars and in her will, she stipulated that nothing in the museum’s collection should be sold, nothing new should be acquired, and the artworks shouldn’t even be moved.

It was to remain exactly as is.

By the 1980s, the building housing the collection was getting run down and the security was very lax.  In 1982 the FBI warned the museum of a plan for an art robbery, but it only resulted in minor upgrades to the security system.

The museum had no security cameras installed inside, and most importantly, they only had a single button with which they could call the police, which was located on the desk of one of the security guards.

Other museums used a system where guards had to call the police every hour to notify them that everything was OK. If a call wasn’t made, then the police would come.

These facts would become very important.

The robbers arrived just after midnight on Sunday morning on March 18. March 17 is Saint Patrick’s Day, which is one of the biggest holidays in Boston, and it was happening on a Saturday evening.

There were two men who were dress as policemen. There were witnesses who were on the street who saw the men, but they just assumed they were police.

There were two guards on duty that night: one 23 years old and one 25 years old. For one of them, it was literally their first night on the job.

Museum procedure dictated that one of the guards would patrol the building while the other sat at the desk with the button which could notify the police.

At 1:20 am, the two men in police uniforms buzzed the side entrance and said they were there because of a disturbance call. The guards didn’t know of any disturbance call, but they looked like real cops and it was St. Patrick’s Day, so something might have happened.

The men in police uniforms told the guard at the desk to call any other guards down to the desk, which he did.

One of the supposed cops then said to the guard behind the desk, the desk where the buzzer was, that he looked like a suspect they were looking for. He asked him to come forward, which he did, and then he threw him up against the wall and handcuffed him. They then did the same to the other guard and notified them that this was a robbery.

They then put tape over the guard’s eyes and head and marched them down into the basement where they were tied to pipes. The robbers took their wallets, told them that they knew where they lived, and if they cooperated, they would get a reward in a year.

All of that took about 10 minutes.

From there the robbers went into the gallery and began taking art.

All in all, they took 13 items. An ancient Chinese vase, a golden eagle from a Napoleonic flag, 5 sketches from Degas, 3 works of Rembrandt, 1 from Manet, 1 from Flink, and biggest of all, “The Concert” by Vermeer. One of only 34 known Vermeer paintings in the world.

The robbers check on the guards before they left, took the security tape, and left the building. The entire operation took 81 minutes.

The total estimated value of everything which was taken was as high as $500 million dollars.

The Vermeer was worth half the entire amount, and it is believed to be the most expensive stolen object in the world.

When the next shift of guards arrived, they couldn’t contact anyone to be let inside. They contacted the police who then finally found the guards bound and tied in the basement.

With the artwork gone, the questions then turned to who did it, and where is the art?

The way they handled art indicated a lack of familiarity. Moreover, they didn’t take some far more valuable objects. Works by Raphael, Michelangelo, and Titian’s “The Rape of Europa”, probably the most valuable object in the museum, were untouched.

The first suspects were, of course, the guards. Many heists are often inside jobs with at least the help of someone on the inside.

The FBI did investigate the guards but concluded they were “too incompetent and foolish to have pulled off the crime.” Not exactly how you want to be exonerated, but I supposed it’s better than being arrested.

Attention then turned towards organized crime.

Boston’s most famous mob boss, Whitey Bulger, denied any involvement. Supposedly, he was angry that someone pulled this off on his turf without giving him a cut.

Some researchers believe that Bulger was involved and may have worked with the Irish Republican Army and that today the stolen art is somewhere in Ireland. However, there is little evidence for this. Then again, there isn’t much evidence of anything.

The two suspects with the most circumstantial evidence were Robert Guarente and Robert Gentile. They were in the Merlino gang which was a mob group that operated in Boston.

Guarente died in 2004 from cancer, and in 2010 his widow told the FBI that he did in fact possess some of the paintings at one point and given them to Gentile for safekeeping.

Gentile was arrested on drug charges in 2012 and was asked about the paintings while being administered a polygraph test. He denied any involvement and failed the polygraph miserably.

The police raided his home where they found news clippings from the time of the crime as well as a list of the artwork with estimated values. Sketchy to be sure, but not really enough evidence to pin the crime on him.

Another suspect was Bobby Donati. Donati died in 1991, a year after the heist in a gang war. Supposedly he wanted to steal the paintings so he could use them as leverage to get his friend and convicted art thief, Myles J. Connor Jr. out of jail. The motive at least sort of makes sense, because trying to sell art that is so well known is next to impossible.

In 2013, the FBI announced that they knew the names of the two original thieves, but didn’t say who they were other than the fact that they were believed to be dead.

As of today, 31 years since the heist, no one has been arrested, admitted, guilty, and the paintings have never been found.

The statute of limitations for the crime passed long ago, so arrests couldn’t be made now if they wanted to. The museum has promised not to press charges against anyone who can return the paintings. The reward for their safe return is now up to $10 million dollars.

As for the museum itself, the odd stipulation in the will of Isabella Stewart Gardner that nothing be moved in the museum left them with a quandary. What do they do now that several of the pieces are gone?

The solution they came to was the simplest. They just hung the empty frames that the original artwork was held in.

These empty frames with nothing in them are some of the most popular exhibits in the entire museum.