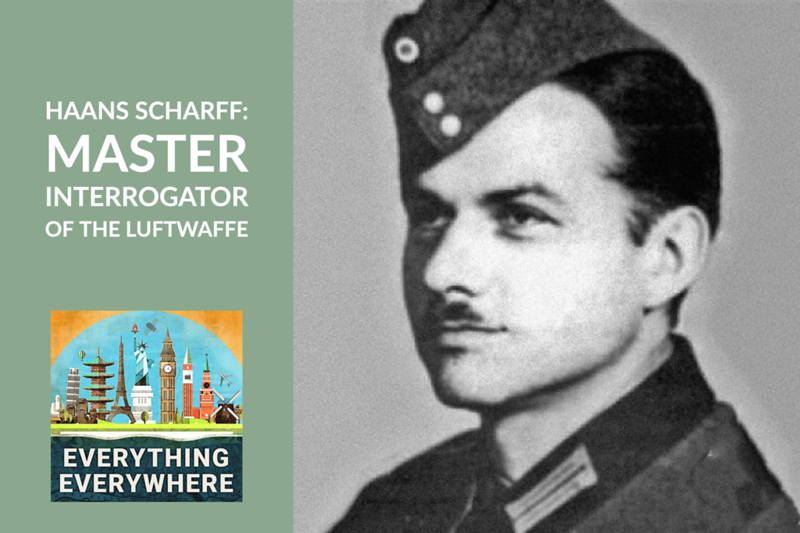 If I were to say “prisoner of war interrogator” something rather menacing probably comes to mind.

If I were to say “Nazi prisoner of war interrogator” something really menacing probably comes to mind.

And If I were to say the “the greatest Nazi prisoner of war interrogator”, you are probably imagining a truly horrifying, evil person.

Learn more about Hanns Schraff, and his rather surprising story, on this episode of Everything Everywhere Daily.

Hanns Scharff didn’t set out for a military career.

He was born in East Prussia in 1907, what is today Poland. His father was a Prussian Military Officer who died in World War I on the Western Front. He had received two Iron Crosses for bravery.

His mother was the daughter of one of the largest textile mill owners in Germany.  Hanns grew up in the family’s villa in Leipzig where the textile mill was located. He was trained in art and also spent several years working in the mill to learn about textiles and weaving.

His older brother was tapped to take over the business from their grandfather, so Hanns went to work for the German company Alder Automotive in their foreign office in Johannesburg, South Africa.

He excelled in his position, which was originally only supposed to be for one year, and was promoted to the head of international operations for Alder.

He remained in South Africa for the next 10 years.

While he was there he met his wife, who was a British South African, and he became quite fluent in English.

In 1939, he and his family traveled back to Germany to see his relatives in Leipzig and while he was there, war broke out. He was stranded in Germany as he couldn’t leave the country due to border closures.

Eventually, he got a job in Germany and, like so many other German men, was drafted into the military.

The unit he was assigned to was supposed to be sent to the Eastern front. Everyone in Germany knew that the Eastern Front was a meat grinder, so his wife managed to secure a meeting with a General explaining that his knowledge of English made him far more valuable than as a front-line soldier.

The general agreed, so he was transferred to an interpreter unit.

In the interpreter unit, he was assigned various low-level paperwork tasks. Mostly, punching holes in paper. While he was bored one day, he estimated that each hole he punched cost the military five pfennig, which was the German equivalent of a penny.

His superior didn’t particularly like his attitude but saw that his talent was probably wasted, so he gave him one of the few, coveted assignments at the Luftwaffe interrogation center.

The interrogation center was in Oberursel, which was just north of Frankfurt.

All captured allied pilots from the western front were sent here for their initial interrogation.

He was assigned to be the assistant interrogation officer of the American Fighters section, which primarily questioned men from the 8th and 9th Army Air Force Units.

It was here that he taught himself how to do interrogations. He was never formally trained. He just figured it out from observation and common sense.

Scharff became the top interrogrator in the Luftwaffe. He was known for getting information from almost everyone he interrogated.

How did he do it? Did he perfect some torture method? Did he hook prisoners up to electric batteries?

The method he used involved becoming friends and taking the prisoners on walks in the woods.

Yeah, I’m serious. He would basically do the exact opposite of what you’d expect a top Luftwaffe prisoner interrogator to do.

He was so successful, that most of the pilots he interrogated had no idea that they even had given up any information.

His technique was more than just becoming friends with the prisoner.

He would start by letting his subject know that he was the only ally the prisoner had. He would gather biographical information on each subject and then tell the subject that he needed more than name, rank, and serial number. If they couldn’t give him something more, then they would be treated as a spy rather than a prisoner of war.

He would go on walks in the woods with the prisoners without guards. Each prisoner would be asked on their honor not to try to escape before their walks, and no one did. On their walks, he wouldn’t talk about the war at all and just talk about other things.

He would collect extensive information about Allied units including who the commanders were, and then would make up information about their spouses just to make it seem like they knew more than they actually did.

Sometimes, he would purposely say something wrong, just so the subject would correct him.

For example, the Luftwaffe noticed that some tracer rounds from fighters were white and others were red. Scharff said that it must have come from a chemical shortage. His subject corrected him and said that the white tracers meant that they were running low on ammunition.

In the end, he interrogated almost 500 prisoners, almost all fighter pilots. He managed to get information from all but 20.

After the war, one of his subjects, Colonel Hubert Zemke said:

“What did he get out of me? There is no doubt in my mind that he did extract something, but I haven’t the slightest idea what.”

Another pilot, Lieutenant Colonel Francis “Gabby” Gabreski, who was the top American ace in Europe during WWII, became friends with Scharff for almost 50 years. He was one of the few prisoners from which he wasn’t able to get any information.

After the war, in 1948, he was recruited by the American government to interrogate Martin Monti, a pilot to defected to Germany in the middle of the war. He came to the United States and stayed, deciding to immigrate.

His techniques became a focus of study for the military and other government units. In 1978 a book was published about his interrogation techniques called The Interrogator: The Story of Hanns Scharff, Luftwaffe’s Master Interrogator.

An interesting conclusion to the story is what Scharff did after he immigrated to the US.

As I mentioned above, he studied art as a child. He began working as an artist which created mosaics. He created a company that did high-profile mosaic projects. His most notable project was inside Cinderella’s Castle in Disney World.

If you go inside, you’ll see five, 15 foot high mosaics telling the story of Cinderella. All of which were made by the Luftwaffe’s Master Interrogator.

Hanns Scharff passed away in 1992. His mosaic company is still in business, creating custom mosaics around the world.

His methods prove the old adage that you can catch more flies with honey than you can with vinegar.