Accra completed changed everything I thought about West Africa.

Since we left Swakopmund, we’ve visited a series of very poor, developing countries. The levels of development differed, but there was a certain commonality they all shared in terms of infrastructure and sanitation.

Accra is at a different level from all the other cities we visited. The roads were paved. Grass was mowed. The monuments were clean and keep in good condition. There were business raining from large to small. Most people were driving cars, not motorbikes.

Ghana in general, but Accra in particular, has been the star of West Africa so far. This is not to say it is perfect or that it is a fully developed country, but when compared to nearby Togo and Benin, the differences couldn’t be more stark. It is easily one of the most dramatic differences I’ve seen in standard of living between people of different sides of a political boundary.

Ghana is a small country, but they have out performed many larger African countries. They’ve had the best African performance in the World Cup and have produced Africa’s only UN Secretary General.

I should also note that Accra lies on the Prime Meridian, so I took my GPS update today right as we were crossing from the eastern hemisphere to the western. 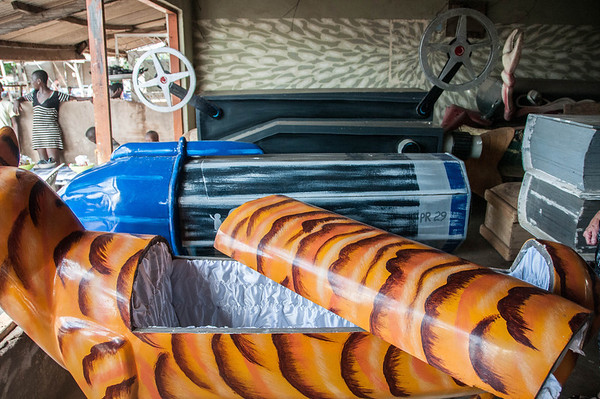 We began the day be getting a tour of the highlights of Accra. Our first stop was a place which made coffins. Ghana is famous for the custom designed coffins which people can order which reflect some aspect of their life. If they were a fisherman, they can get a coffin shaped like a fish. Movie lovers can get one that looks like a film projector. If you like beer, you can be buried in a giant beer can.

One of the coffin makers is actually going to the US soon to do a 6-month apprenticeship with a woodcarver so they can improve the quality of the coffins. It appears to be a growing business.

The next stop was at the monument for Kwame Nkruma, who is the father of modern Ghana. I’ve been to so many monuments around the world that were built with the best of intentions, but have been let to slowly decay over time from neglect. Water fountains with no water. Rows of flag poles with no flags. Crumbling cement and tile on statues which haven’t been cleaned in years. This was not the case here. The Kwame Nkruma was clean, the grass was cut and and the fountains were working. It was in better condition than I’ve the Mall in Washington DC on several occasions.

We’ve had several lectures on Kwame Nkurma on the ship and I don’t want to go into too much detail about his importance, but he lead Ghana to become the first African British Colony to become independent in 1957 and after a military coup, he became the co-president of nearby Guinea. He died in exile and his reputation was later restored and his body returned to Ghana. His final resting place is at the memorial in Accra. 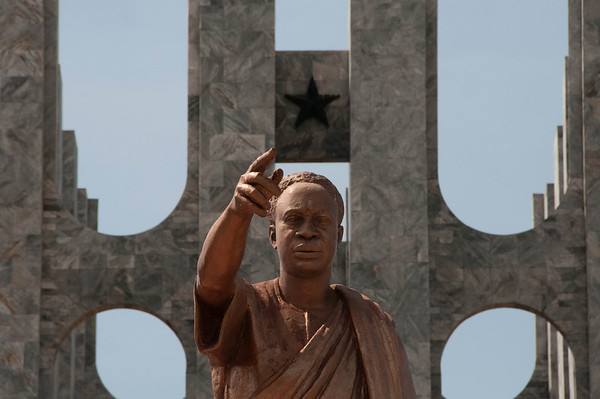 After visiting the Kwame Nkurma memorial we drove past several other highlights in Accra before heading 90 minutes out of town to a place which manufactures beads from recycled glass. The drive there was as eye opening as the initial impressions I had of Accra. The countryside is, as you would expect, not nearly as developed at the capital. Nonetheless, there were signs of progress I saw in every village we passed through.

Even in the countryside, the roads were still paved (albeit with potholes on some of the minor roads). Every village had ample evidence of entrepreneurship, which had been seriously lacking in the stops we had made up to this point. The business may have been little more than a storefront or a shack selling tires, but they had business names and were clearly in the business of business.

The names of the business were hilarious to my non-Ghanian eyes. Most of them had some religious theme coupled with a description of the business. For example “The Lord Is God Beauty Salon”, or “Amazing Grace Vulcanization”. I’ll be talking more about them in tomorrow’s update.

I wasn’t sure what to expect at the bead factory, but it turned out to be more interested that I expected. Beads are very important in local customs and ceremonies. They take used bottles of all sorts, crush them into small bits or down to a powder, and then melt them in a forge to create beads of various colors.

We’ve visited schools, villages, and monuments on this trip but Accra was the first time we visited a local business. I’m very glad we had a chance to visit local entreprenuers at both the bead factor and the coffin shop. Both are uniquely Ghanian and both showcase what local people are doing to improve the economy and theirselves.

I think that is what I came away with from Ghana. Whatever Ghana is doing, at least relative to their neighbors in West Africa, is working. I had a real positive feeling about Ghana and absent a coup or some other disruption, they should keep moving foward.