We had a very short trip between Accra and Takoradi, Ghana. Probably the shortest sailing we had since the trip began.

It was also one of our shorter excursions on the trip, because we had to set sail early in order to get to Freetown in Sierra Leone in time.

Our objective for the day was to visit several of the slave forts along the coast. We visited two forts: Cape Coast Castle and the Elmira Castle, both of which are part of the same UNESCO World Heritage Site.

The trip to the slave forts was about 90 minutes from the port of Takoradi. During that trip we passed through several towns and villages which showed a side of Ghana very different from what we saw in Accara. This part of Ghana was not as developed as the capital, but it still demonstrated why Ghana was more developed than its neighbors. The infrastructure was still significantly better and there were more signs of business activity.

The first fort we visited was the Cape Coast Castle. Originally built by the Swedish Africa Company (yes, the Swedes were involved in the African slave trade) it was eventually possessed by the Dutch and then finally the British. A sizable fort, I was shocked at how little of the structure was dedicated to the keeping and holding of slaves. This wasn’t because of the number of slaves which went through the fort so much as the conditions the slaves were held under. The only parts which saw actual slaves were the dungeons which would be packed with humans in pitch darkness for weeks. Even though it was only 10% or less of the structure by area, easily 90% of the humans in the fort would have been in these parts.

I will be writing more about the slave forts themselves in an upcoming UNESCO World Heritage post for the site.

We then headed up and went to the nearby city of Elmina where we walked through the town to reach the second fort. The people and the town were by far the more interesting part of this stop. Elmina is a fishing village and the day we visited all the boats seemed to be in the harbor. It was an incredibly colorful collection of boats and flags. Each boat would fly a different flag, be it for another country or a football club, so they can be identified from shore.

I had only seen a scene like this once before, and it was in the fishing village of Mui Ne, Vietnam when all the fishing boats were in port for the day. It was quite an impressive site. We were told that the basic carved out boats found in this region can find their way all the way up to Senegal!

As with many of our stops, Elmina doesn’t get that many tourist so the people seemed as interested in us as we were in them. We also got a chance to see more of the great business names which Ghana is famous for. My favorite were the “God Rules Internet Cafe” and the “Triad College of Theology and Computer Training”. 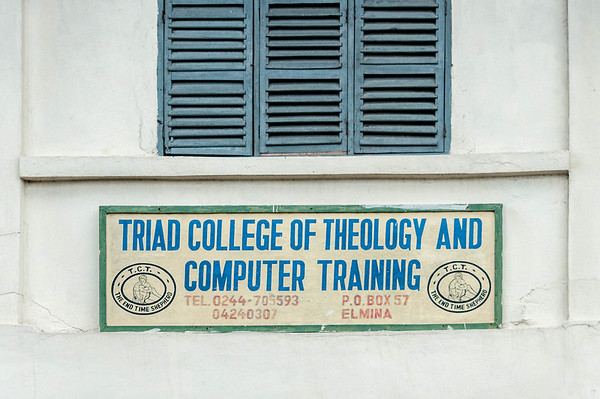 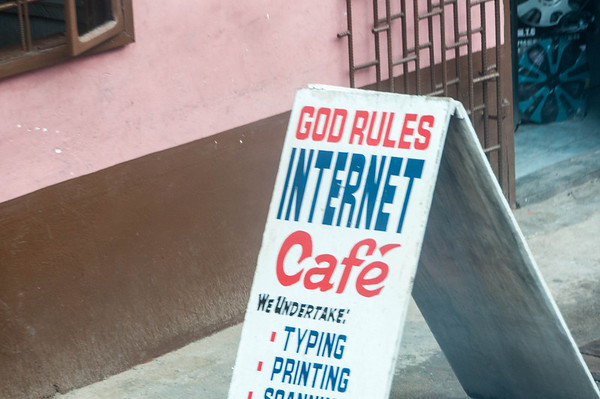 If there is one country I’ll be sure to revisit from this trip, it is Ghana. I was very impressed with the direction the country is headed and the state of affairs on the ground. From the comments I’ve been getting, it also seems to be the most visited country in the region, which comes as no surprise to me.

From here we will be sailing to the country which is the biggest wild card for me on the trip: Sierra Leone. I’m not sure what to expect and what we’ll see. The only other place I’ve been which had so recently been through a civil war was East Timor.