As I mentioned yesterday, the port of Cotonou, Benin was closed for Easter. Technically speaking, we could have gone to Benin on Easter because the Benin navy had offered to transport people to shore for the low, low price of €350 per person….each way! It also would have been in a single small ship that could only take seven people at a time (the ship’s zodiacs can take 10 for example). Somehow, I don’t think the money would have wound up in the coffers of the government of Benin :)

Nonetheless, we managed to arrive in Benin without naval assistance the Monday after Easter. Oddly enough, the border between Togo and Benin is a time zone change so we had to set our clocks back one hour, for one day, during our Benin visit.

Benin, like Togo is a French speaking country with dozens of different ethnic groups in its small area. Cotonou, while technically not its capital, is its most important city and oddly enough, where most of the government buildings are anyhow. It is its largest city, most important economic center and location of its largest port. 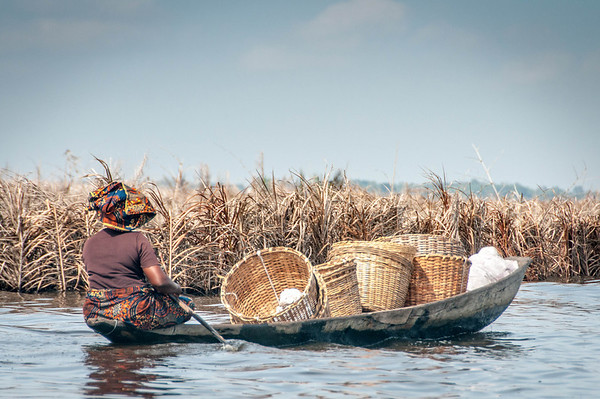 Arriving in Coutonou, I immediately noticed several differences between it and Lome, Togo. For starters, there was much less litter on the ground. This was something which was confirmed the more we traveled throughout the day. (As we later found out, the President of Benin started a campaign against litter which has made a huge difference). Also, the roads, at least in the city, were in much better shape than in Lome. The major buildings also appeared to be in much better condition. All the other passengers and staff I spoke with shared the same observation: Cotonou was subtly, yet significantly, nicer than Lome. It didn’t hit you over the head, but it was obvious if you took the time to look.

Our first stop of the day was the stilt city of Ganvie which was located on Lake Nokoué. When I say it was located on the lake, I don’t mean it was located alongside the lake. It was ‘on’ the lake. The town has approximately 20,000 inhabitants and was established about 400 years ago as people fled to escape slavers. All of the people of Ganvie have to use boats to get from place to place, transport products and fish.

We boarded boats near the fish market and headed in to Ganvie, which was several miles off shore. Lake Nokoué is a very shallow lake and everywhere you could see evidence of people fishing, or people farming fish. The most popular method of creating pens for fish was to plan dried palm fronds into the water to create a barrier. There were so many palm fronds in the water, they almost looked like a natural feature.

Ganvie remind me a great deal of the floating villages on Tonle Sap in Cambodia. People who live in their own version of Waterworld, where their backyard is liquid.

Living on a lake has its own set of problem, beyond the obvious need to use a boat to go anywhere. There is no proper sewage system in Gavnie, which means all human waste goes directly into the lake. Not surprisingly, we were told in no uncertain terms, not to touch let alone drink the water. The other major problem seems to be overfishing. 20,000 people all using the same, shallow lake for a daily food source will take its toll. In the village we saw people throwing nets outside every third or fourth household. We didn’t see anyone catch anything and the fish we did see in the market were all uniformly small.

I wouldn’t say there were a lot of tourists in Ganvie, but compared to the rest of West Africa we saw more than we did anywhere else. There were a few other boats, each carrying 1 or 2 tourists visiting the lake.

Our afternoon encounter was in the city of Ouida (pronounced wee-da), which was a 90 minute drive from Ganvie.

Ouide was the first of the several slave trading posts we were to visit on our trip. The fort we visited in Ouida was a Portuguese fort, but there were actually forts from several countries which were established in the area. Slaves were brought from upcountry by local tribes who captured them as spoils of war.

Ouide is also a location of one of the many “Doors of No Return” which are found in West Africa. These are the doors the slaves exited to board the ships, never to return. There is a monument there today which marks the location of the Door of No Return and commemorates the slaves which were taken from Ouida.

Ouida also was a classic example of how traditional African religion can exist side by side with Christianity. Outside the basilica was a python temple. Nearby was a small forest which was sacred to the voodoo religion. It didn’t seem to be an either/or for most people as they practiced both religions in some combination.

At the end of the day, the thing I found most facinating about Benin was being able to compare it to what we saw the day before in neighboring Togo. Two countries with similar geography, histories, ethnic groups and languages, yet they developed in different and significant ways.