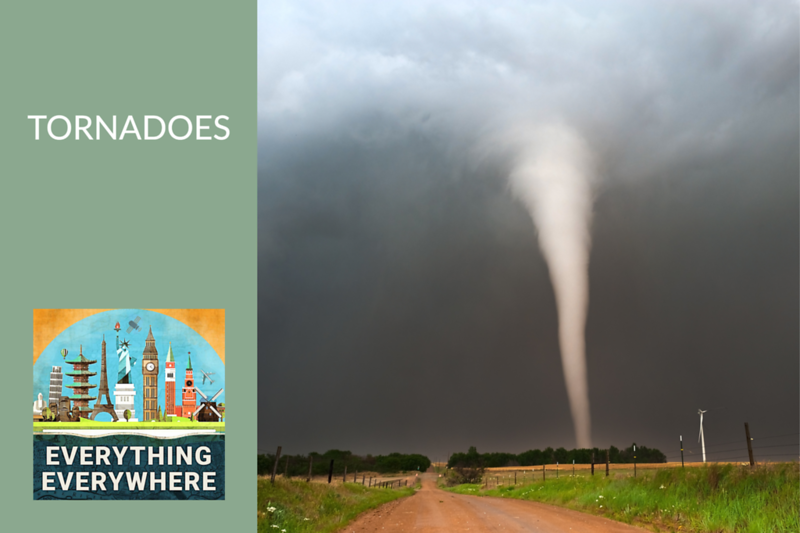 Over 2,000 times a year, all over the world, a meteorological phenomenon strikes the Earth with devastating consequences.

They can strike without warning and the worst ones have killed hundreds of people.

Yet, the secrets to how the work wasn’t understood until one determined man figured out their secrets.

Learn more about tornadoes, how they work and just how deadly they can be, on this episode of Everything Everywhere Daily.

I have to confess, the inspiration for this episode came from a tornado warning which my area went through just a few hours before recording this episode.

As I already had this topic on my list of future shows, I figured there was no time like the present to address the topic of tornadoes.

Tornadoes are one of the most devastating and destructive forces in nature.

So, let’s start at the beginning and address what a tornado is.

A tornado, as you probably know, is fundamentally a vertical vortex of rapidly spinning air.

But why does such a vortex start, and why doesn’t it happen all the time?

Full-blown tornadoes only occur when you have storms. The reason for this has to do with the movement of air.

On a normal day, atmospheric pressure is usually pretty stable. Regardless of what the temperature is, air pressure is pretty much the same. There are some exceptions to this which I’ll get to in a bit.

However, when you have a storm, you have large differences in air pressure.  In particular, there are certain types of storms that tend to cause tornadoes called supercells.

This starts with winds blowing at different speeds and directions at different elevations. This is known as wind shear. These different wind speeds create a rotating cylinder of air.

The moist air once cooled will either precipitate in the form of rain or possibly hail depending on how cold it is at the higher elevation.

As this is happening, the column of air that is initially horizontal can turn vertical. The rotation of the vertical column is now translated to spinning. In a supercell, the entire cloud mass can start spinning.

Sometimes this spinning can form a funnel cloud. If it reaches the ground, then it is considered a tornado.

There are vortexes that are not full-blown tornadoes.

In the desert, you can often see dust devils. In fact, dust devils have been observed on Mars. A dust devil can arise when you have very hot temperatures near the surface.  The hot air will rise and the wind shear will cause a rotation in the column of rising air.

If there is dust that is captured in the updraft, then you can actually see the vortex.

On Mars, there is plenty of dust, and it isn’t so much an issue of high temperatures as it is temperature differential.

Sometimes the temperature differential can be caused artificially. If there is a fire, it can cause a fire devil where flames literally get sucked up into the vortex.

Despite living most of my life in the midwest, I’ve never seen a tornado here, but I did actually see a fire devil when I was driving through Western Australia, which is a much more rare event.

Likewise, if it sucks up smoke or steam, it is known as a steam or a smoke devil.

If a tornado touches down on water it is known as a waterspout. In such a case, water is sucked up into the vortex. Waterspouts tend to be short-lived because of the weight and temperature of the water.

I should finally note that dust devil-type air vortexes occur far more often than most people realized, but if there is no dust inside it, most people would never know.

These other vortex events seldom cause any damage. Tornadoes are the events that do the most damage.

As I mentioned in the introduction, there are over 2,000 tornadoes that touchdown all around the world each year.

The vast majority of these, over half, occur in the United States and Canada. The highest concentration of tornadoes occurs in an area called Tornado Alley. This is basically the same as the Great Plains and it goes from Northern Texas up through Oklahoma, Kansas, Nebraska, the Dakotas, and southern Saskatchewan and Manitoba.

While most tornadoes occur in the American midwest, there are other pockets of tornadoes around the world. The country that sufferers the most deaths from tornadoes is actually Bangladesh.

In fact, Bangladesh had the deadliest tornado event in history. In 1989, the Daulatpur–Saturia tornado killed 1,300 people in Bangladesh. Of all the tornadoes in history which have killed over 100 people, half of them have occurred in Bangladesh.

Other tornado hot spots, that being places that might have multiple tornadoes each year include the coasts of Australia, South Africa, Eastern China, Northeast Argentina and Uruguay, and Europe.

Much of our knowledge of tornadoes actually came from one determined researcher by the name of Tetsuya “Theodore” Fujita.

Ted Fujita was born in Japan in 1920 and studied meteorology. He very quickly became an expert on the subject of tornadoes. One of his early discoveries was how tornadoes have a cold-air downdraft.

Fujita was working in the city of Kokura during World War II. Kokura was actually the original city that was targeted for the fat man bomb which was dropped on Nagasaki. Fujita later studied the damage from the atomic bombs which helped him better understand how atmospheric downbursts and microbursts worked.

In 1953, he was recruited to come and work at the University of Chicago, and it was there that he was given the nickname “Mister Tornado”. The midwestern United States was the place to be for the world’s foremost tornado researcher.

Fujita developed several innovative techniques for studying tornadoes. He pioneered the technique of using aerial overflights after tornadoes to assess damage as well as to photograph tornado paths.

From this, he developed the theory of multiple tornado vortexes. He noticed that tornadoes would often leave multiple paths on the ground which were entwined with each other.

He was ridiculed for it at first, but later video evidence proved him to be correct.

His biggest claim to fame however was his creation of what became known as the Fujita Scale, which he introduced in 1971.

If you have ever heard of a tornado called an F1 or an F5, that “F’ stands for Fujita.

An F0 tornado is one that does light damage. Small trees will be uprooted and shingles get blown off houses. Wind speeds are between 65 to 85 mph or 105 to 137 kph. Over 52% of all tornadoes are categorized as F0.

An F1 tornado has wind speeds of 86 to110 mph or 138 to 177 kph. Approximately 33% of all tornadoes are categorized as F1. An F1 tornado will rip off parts of roofs and tip over mobile homes.

F2 tornadoes have wind speeds from 113 to157 mph or 181 to 253 kph. Only 8% of hurricanes are categorized as F2. Whole roofs are torn off and mobile homes can be completely destroyed.

F3 tornadoes have wind speeds from 136 to 165 mph or 218 to 266 kph. Only 4% of all tornadoes are F3s. An F3 will uproot almost every tree in its path, will move large vehicles, and tear walls off of wood-frame houses.

F4 tornadoes and above are very rare. An F4 tornado will have a wind speed of 166 to 200 mph or 267 to 322 kph. About half of one percent of all tornadoes are classified as F4. An F4 will totally destroy wood houses, blow trains off their tracks, and will rip the bark off of trees.

Because the Fujita scale measures tornadoes by their damage, it is possible to retroactively categorize hurricanes.

The largest recorded tornado in history occurred on March 18, 1925. An F5 tornado passed through three states: Missouri, Illinois, and Indiana. It lasted for 3 ½ hours, traveled a distance of 219 miles or 352 kilometers, and moved forward at a speed of 73 mph or 117 kph.

All three of those are records that have never been equaled on Earth.

The greatest tornado outbreak, which is an event that spawns multiple tornadoes occurred in 2011. Known as the 2011 Super Breakout, from April 25 to 28, 2011, 175 tornadoes touched down in states from Louisiana to New York.

One common myth about tornadoes, at least in the United States, is that they tend to be attracted to mobile homes. This isn’t true of course, but there is a reason for the myth. The vast majority of tornadoes are F0 to F2, which will only do superficial damage to most regular buildings, but they are strong enough to totally destroy mobile homes.

If you live in an area that is susceptible to tornadoes you probably are well aware of what to do in the event of one. If you aren’t from a tornado-prone area, you probably have no clue what the protocol is.

For starters, most communities will have a tornado siren that will be broadcast if there is an immediate threat of a tornado. These are basically the same as an air raid siren. They are usually tested once a month. Where I’ve lived it was usually the first day of the month at noon or 1 pm.

If there is a threat of a tornado, it is recommended that you take shelter in your basement, preferably under a staircase. Tornados are surface events and if your house was directly hit, it would usually throw debris outward, and belowground would be safe.

If you are in a building without a basement, it is recommended you go to the interior room of your house on the first floor. These are the most likely to survive as roofs and walls will be damaged first. If possible, lie in a bathtub as they are very heavy and less likely to be moved.

On many farms, they will have special tornado shelters built which are underground.

If you are caught in the open, you are recommended to lie flat in a ditch or a low-lying area so you can’t be hit by debris.

Most tornadoes occur in the late afternoon or early evening due to the heat build-up during the day, however, there have been tornadoes recorded at every time of the day

In 2017 I actually went on a tornado-chasing trip. For a week we drove all over the midwest, starting in Denver and going as far as the Texas Panhandle, Oklahoma, Kansas, and Nebraska. We didn’t see any funnel clouds, but the experience of photographing supercells was extremely exhilarating.

Tornadoes are some of the most powerful and destructive events in the natural world. They can cause massive destruction and destroy communities. The next time you hear about a tornado or some tornado-related disaster, you’ll now have an idea of how they are formed and how they are categorized.