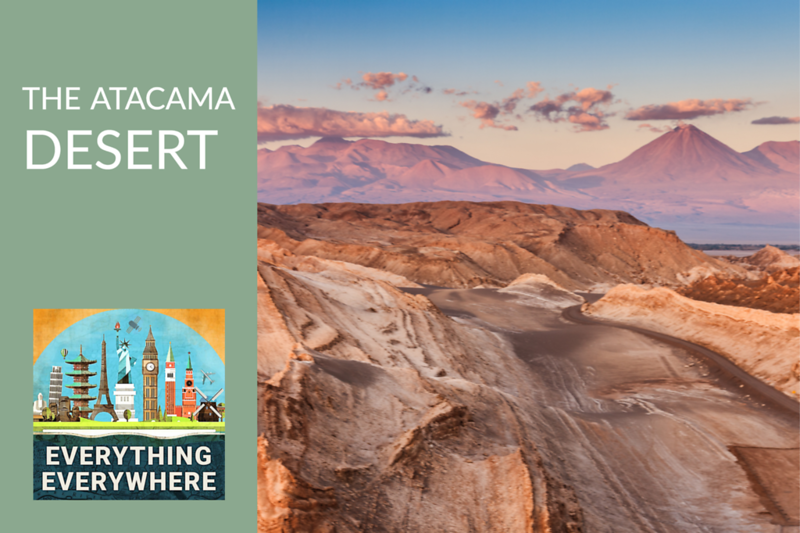 Situated in the north of the nation of Chile lies one of the most extreme environments on Planet Earth. The Atacama Desert.

What makes the Atacama Desert so unique isn’t its size or its temperature, it is the amount of precipitation it gets….or rather the lack thereof.

It is precipitation that defines what a desert is, and by that logic, the Atacama is the most desert-y of all the deserts.

Learn more about the Atacama Desert and what makes it so different and special, on this episode of Everything Everywhere Daily.

The Atacama Desert is located in what is the northernmost 20% of Chile with bits of it bleeding over into southern Peru, southwestern Bolivia, and northwestern Argentina.

It is sandwiched between the Andes Mountains and the Pacific ocean along 1,600 kilometers or 990 miles of land.

Depending on how you define it, it has an area of approximately 105,000 square kilometers or 41,000 square miles. It would be a little bit bigger than Iceland.

In terms of size, it would only be the 25th largest desert in the world, behind a bunch of better-known and lesser-known deserts.

None of these statistics are particularly special. So why bother doing an episode on the Atacama Desert?

It is because the Atacama Desert is one of the driest places on Earth.

Taken as a whole, the Atacama gets about 15 millimeters or 0.6 inches of rainfall per year.

However, this is just an average. There are parts of the Atacama that have never in recorded history received any rain whatsoever. The town of Calama had no recorded rainfall from the years 1570 to 1971.  That is a drought that lasted 401 years!

Here I should note that while there are places like Calama that get no rainfall, technically speaking there is one place that is considered drier. That would be the dry valleys of Antarctica. In these valleys which have no snow or ice, it is believed that there might not have been precipitation in over 2,000,000 years.

Given that the Atacama runs along the coast near the Pacific Ocean, it seems that this is a rather odd spot for a desert, let alone one this dry.

The reason why the Atacama is so dry has to do with geography. The Atacama is located between two mountain ranges: the Andes and the Chilean Coast Mountain Range.

The higher Andes Mountains block the moist air which comes from the east. The Andes cause the moisture to precipitate on the eastern slope in Argentina.

The Chilean Coast Mountains run alongside the coast and block moisture coming from the Pacific Ocean.

Moreover, the fact that the mountains run perpendicular to the prevailing winds means you wind up with more moisture being blocked than something like the Himalayas which run east-west along the direction of the winds.

When a mountain range blocks moisture, it is called a rain shadow. The Atacama is located in a double rain shadow.

Moreover, the current along the Pacific Coast is the Humbolt Current, which is carrying cold water up from Antarctica. The air along the coast is cooler than normal for that latitude and carries less moisture than usual.

Just as another point of reference, the Atacama is about 50x drier than Death Vally, California.

Given how geography has created the desert, the Atacama is also believed to be the oldest desert in the world, going back at least several million years.

So what are the implications of this extreme aridity?

For starters, there is obviously very little life in the Atacama. The entire desert is almost devoid of vegetation, and as a result, almost no animal life as well.

Even though it isn’t visible there are parts of the desert that do have life. There are some species of desert flowers that have evolved to the dry conditions in the desert.

They have seeds that will lie dormant for years until they get moisture. About every five to seven years, these wildflowers will get enough rain to bloom and there will be a brief and intense explosion of color.

There are over 200 identified species of wildflowers that exhibit this behavior.

Other parts of the desert have thick fog that rolls in on a regular basis. One plant, known as Tillandsia, evolved to live off of the moisture in fog.

Almost everywhere you look on Earth, you can find microbes. The types and the number you will find might vary, but you’ll usually find something. In the deepest parts of the Atacama there is almost nothing.

It turns out that the Atacama is one of the closest places on Earth to another place that is very dry: Mars.

In 2003, NASA replicated the same experiments used on the Viking 1 and 2 landers to see if they would find signs of life. They didn’t find anything.

Subsequent research by NASA found that there is in fact life even in the deepest, driest part of the desert. They dug down to 20 centimeters, took samples, and were able to grow bacteria when they added water.

The Atacama has subsequently been a testing ground for Mars and lunar rovers.

A good approximation to Mars isn’t the only thing that the Atacama has to offer space sciences. It was one of the best places on Earth for astronomical telescopes.

What makes a good location for large telescopes is the number of nights each year they can make observations. Because there is such little precipitation, there are few clouds. That means that telescopes can observe for about 340 nights a year.

On top of that, it is far away from any cities and their light pollution, and it is at an average elevation of about 7,000 to 8,500 feet above sea level.

It is home to a host of telescopes including the Atacama Large Millimeter/Submillimeter Array, the Atacama Pathfinder EXperiment (APEX), the Atacama Cosmology Telescope, and the Very Large Telescope.

It will also be the home of the Extremely Large Telescope which is currently under construction. When completed in 2027, its mirror will have a diameter of 39.3 meters or 130 feet, and it will be the largest single mirror telescope in the world.

There was a mining boom in the desert from the 19th century to the 1940s. Over 170 mining communities sprang up in the desert to support the mining industry.

The industry collapsed with the discovery of artificial nitrates, and today most of those towns are ghost towns.

There are still some mines in the region that mine for other minerals such as gold, copper, and silver.

The perceived wealth of the Sodium Nitrate deposits in the 19th century was the cause of what became known as the War of the Pacific. The War of the Pacific was fought between Chile and an alliance of Peru and Bolivia, over a five-year period between 1879 to 1884.

Chile ended up winning the conflict, which resulted in Bolivia becoming a landlocked country,

Despite the lack of fresh water, animals, and arable land, there is evidence of ancient humans who lived in the Atacama.

The people who lived there have been dubbed the Chinchorro. They eeked out an existence on the coast and based on the evidence of their waste that has been found, it is estimated that 90% of their diet consisted of seafood.

The Chinchorro people are best known for one thing in particular. Mummies. The Chinchorros were one of the only people that have been discovered who mummified everyone in society, regardless of social class.

Many of the techniques used for the preparation of the dead were similar to what was done in Egypt.  About 30% of the mummies found were preserved naturally, which was really easy to do in a location like the Atacama. The desert will naturally dehydrate everything.

There are people who live in the Atacama Desert today, and they almost all live in cities that are situated on the coast. There is a population of over 1 million people spread throughout the entire region.

The largest parts of the economy are mining and tourism. There is some agriculture near the coasts which specializes in fruits and vegetables for export, as they tend to ripen there before the rest of the country.

The Atacama Desert might not be the biggest desert in the world, but there is no other like it.  Its age, its location, and its extreme aridity make it one of the most unique places on planet Earth.

Today’s review comes from listener Sargent Salt over at Apple Podcasts in the United States. They write,

I’ve binged your show so hard during a lull in a usually busy schedule, and it’s been a whirlwind of interesting tidbits about a fascinating world. Many of the shows remind me of unforgettable topics I learned (and forgot) at some point over the years and I was absolutely delighted to hear about them all over again. If you ever cover the Melbourne Olympic Torch prank, I’ll add a coveted sixth star. (I know how.)

Thanks, Sargent Salt! Learning is a lifetime pursuit. There are many things we might have come across in the past that we just need a refresher on to have it all come flooding back to us.

As for the Melbourne Olympic Torch prank, I’ve made a note of it. I don’t know if it could fill a full episode, but I might have some idea for where I could mention it.