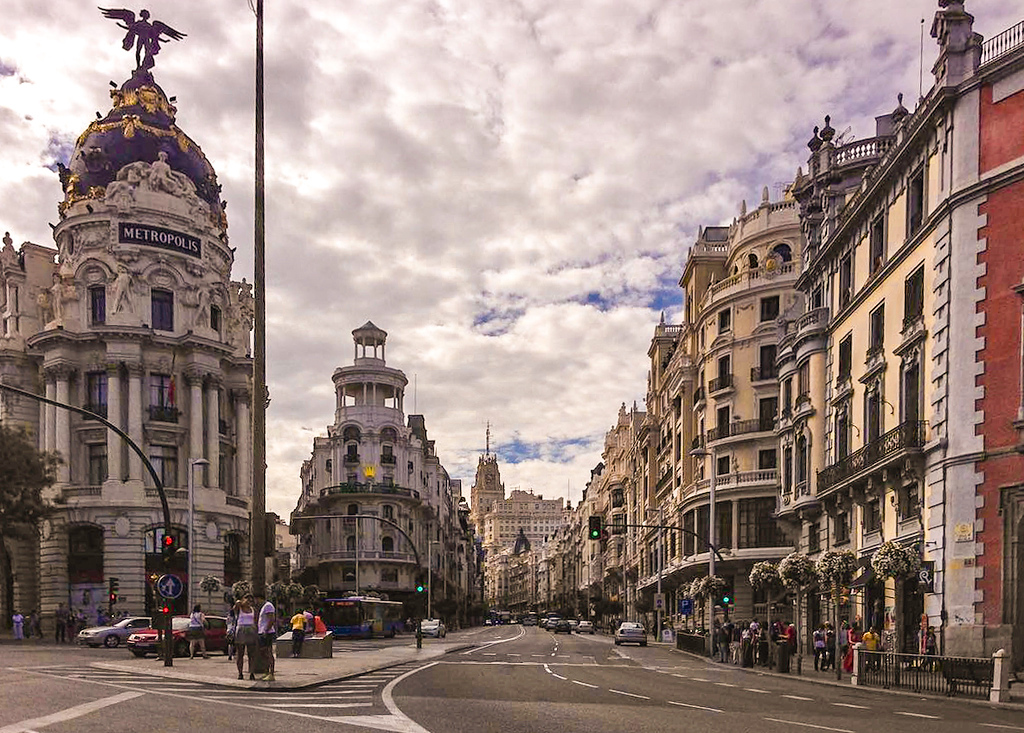 1. Wander around the Puerta del Sol

The Puerta del Sol, or gate of the sun, isn’t the heart of Madrid—it’s the heart of Spain. This is where Kilometer 0 is located, the point from which every main road in the country radiates. Not only is it on the site of a former gate into the city, but it once also housed an infamous subterranean prison. These days, it’s where everyone comes together. Whether for a popular protest or a political speech, people stream here from all corners of Madrid. If you happen to be spending New Year’s Eve in the capital, thousands (it seems like millions) show up with a handful of grapes. At the stroke of midnight, revelers pop a grape into their mouths, and again each time the clock chimes. After 12 strokes, mouths are spitting pits and the new year is ushered in with great cheer. Puerta del Sol is also home to Madrid’s official symbol, the statue of the Oso y Madroño, or the bear and the strawberry tree.

2. Trade stamps on the Plaza Mayor

Since time immemorial, this part of the Old Town has welcomed traders and soldiers, and the occasional Grand Inquisitor. In the early 17th century the giant square was beautified by the Hapsburgs and successive renovations graced it with the lacy arcades that surround it today. The best-known of the arches that lead into the square is the Arco de Los Cuchilleros, or cutlery, whose iconic steps often appear in stories about Madrid.

If you’re wondering why you would visit Madrid in the winter, the Plaza Mayor is decked with bright lights on buildings and market stalls. On Sundays throughout the year, traders come out with stamps and coins to cigar bands and postcards. Collectors set up their wooden stands and lay out each item lovingly for the knowledgeable eye. When the sun is out, you’d think you were in a medieval square, with singers and actors and unicyclists each appropriating their corner of the huge space, so rare in Madrid’s warren of tiny streets. If you’re hungry, pop into one of the many tapas bars under the arcades.

3. Let your taste buds guide you through the city

Eating is possibly Madrid’s national sport (other than rooting for the Real Madrid football team, of course). And with reason: An old saying has it that any self-respecting Madrid street consists of a bar, a bank, a bar, a bank and so on.

And all the bars serve food.

Three amazing eateries are within a few blocks of the Plaza Mayor. The first is just off the square—Casa Botín, founded in 1725 and, according to the Guinness Book of World Records, the oldest restaurant in the world. It is rightly famous for its roast meats.

If it’s too early in the day and Botín is too rich for you, a few twists and turns along small streets will land you at the Romance-era Chocolatería San Ginés, where the world-famous churros are crisp and the chocolate is so thick you could probably stand your spoon in it. Walk-in, pay, order, and sit. If you want more than churros but less than roast suckling pig, then walk over to the San Miguel market. If you can make it past the Jabugo ham right by the entrance, you’ll end up in specialty tapas counters where you can try small portions of … everything.

The city’s three preeminent museums—the Prado, Thyssen-Bornemisza, and Reina Sofía—make up what has come to be called Madrid’s Golden Triangle of Art. The Prado has all the classics: Goya, Velázquez, El Greco, Rubens, Titian. The most famous work is perhaps Las Meninas by Velázquez, one of 7,600 paintings held by the museum (you can break up your visit with lunch on the main floor).

The Thyssen-Bornemisza is one of the largest private collections of European art in the world whose art ranges from the 13th to the 20th century, showcasing everyone from Monet to Van Gogh to Picasso.

For the best in Spanish modern art, head to the Reina Sofía, whose Picasso collection includes Guernica, the artist’s monochrome denunciation of the Spanish Civil War.

5. See Madrid from above

Because it’s relatively flat, Madrid stretches out in all directions and one of the best ways to see—and understand—the city is by seeing it from above. The first and easiest panorama can be had from the cafeteria of the Corte Inglés department store off the Gran Vía. Climb to the Gastronomic Space on the ninth floor for a perfect view that sweeps all the way down to the Plaza de España.

Nearby, atop the classic Círculo de Bellas Artes where the Gran Vía begins, you can admire the iconic view of the Metropolis building and its mounted horseman.

The old post office building is located on the Plaza de Cibeles, and it offers a 360-degree vista that spans from the Retiro Park all the way to the Torre de Madrid.

All three of these viewpoints are within walking distance of one another. The fourth and newest, a bit further afield, is the Faro de la Moncloa, built to celebrate Madrid’s nomination as a European City of Culture. Take the panoramic elevator to the top and admire not only Madrid, but its natural surroundings and the Sierra in the distance. To reach it, ride the metro to Moncloa and use the Princesa exit. The tower is an eight-minute walk away.

6. Clap your hands to a tablao flamenco

Flamenco may have originated in Andalusia, but Madrid is where the stars come if they want fame and fortune. This triumvirate of song, dance, and guitar may be an acquired taste, but if you do acquire it, you may become addicted to the soulful mourns and snappy clap of the castanets. As a result, Madrid is full of tablaos, or flamenco shows, and hosts some of the best acts in the country.

Torres Bermejas has good food and an Andalusian look, Cardamomo is huge and a media favorite, and Corral de la Morería is Madrid’s oldest tablao. No one is better than the other—you can’t go wrong with any of them. But you must try this at least once in your life.

7. Take a walking tour of the city center

It may be a world-class capital, but if you’re game, Madrid is walkable in a day. Not all of it, mind you, but you can see most of the sights—and taste most of the food. If you have more time you’ll be able to explore them in-depth, but you can certainly get a taste of Madrid’s highlights if you use your 24 hours wisely.

8. go to the Rastro on Sundays

Like many places in Madrid, El Rastro counts its age in centuries—in this case four—rather than in years. The city’s most famous flea market used to be dedicated to antiques and second-hand goods, but these days it is suffering the fate of many markets and sells mostly new clothes. That said, you don’t necessarily go to the Rastro to buy, but to meander and absorb the ambiance. Leave the main market and wander around the side streets, more reminiscent of the market’s original intent, with streets dedicated to specific goods, from books to birds.

9. Take a deep breath in nature

Most visitors stay in the city’s core and when desperate for greenery, head out to the Retiro, the green oasis in the heart of Madrid. But the city has a new nature draw: Madrid Rio, a huge patch of green along the Manzanares River that combines countryside, playgrounds, historic bridges, a beach, a cultural center, and a shopping mall. Take the subway to Casa de Campo—it’s a ten-minute walk from there and look at Madrid differently.

10. Take a day trip to one of Madrid’s World Heritage Sites

You’ll have to leave the core of the city if you’re chasing World Heritage Sites in Spain, the UNESCO-approved list of spectacularly valuable venues. There are four in the province of Madrid, all of which can be reached by public transport (some more easily than others):

Madrid, like many other underrated Spanish cities, becomes more engaging the longer you stay. Unlike many tourist destinations, Spain’s capital buzzes with the energy of those who make their home here and who just happen to live in one of the most historic, traditional, and exciting cities in the world. Just walk around, and you’ll enter a world of discovery.

Leyla is a former diplomat and foreign correspondent whose website, Women on the Road, helps women over 50 travel smart, safe and solo. You can catch up with her on Facebook or Instagram.