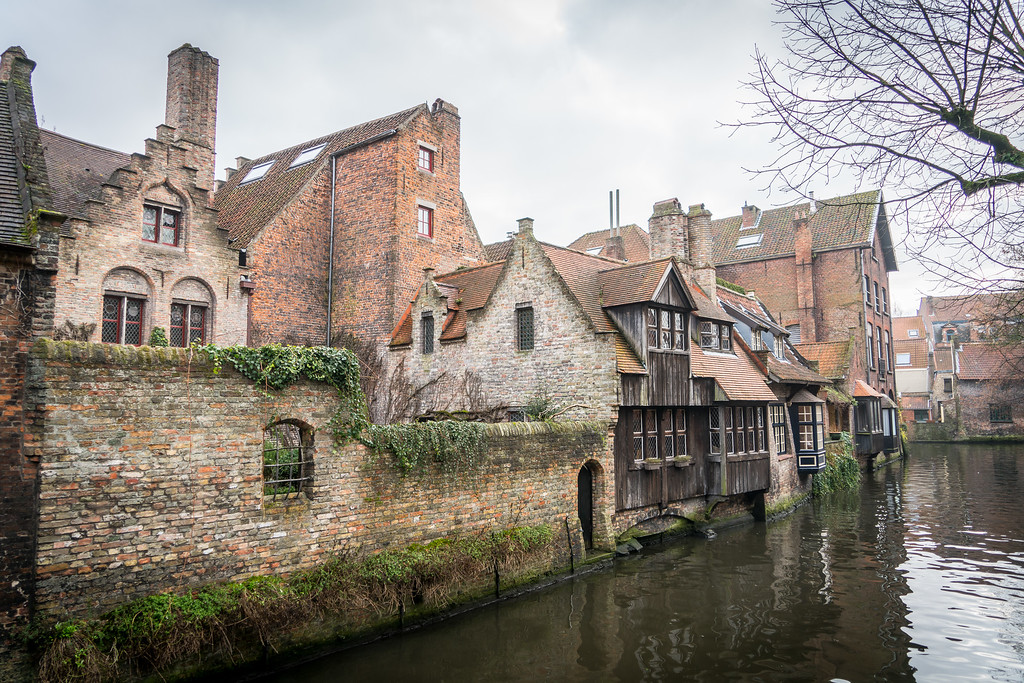 Bruges is the type of city that you fall in love with instantly. How could you not? It’s cobblestone streets and swans floating by in canals, it’s riddled with chocolate shops and has fascinating architecture all around. It’s easily walkable and simple to navigate. There are so many amazing things to do in Bruges. From fine art to fantastic food, adventure, and history, there’s so much to explore!

Bruges is world-famous for chocolate! You’ll want to sit down at one of the small, family-owned shops and try an assortment of pralines. Belgian Pralines are notoriously small and perfect for sampling. They consist of a hard chocolate shell with a creamy and soft center. Pair with a rich espresso.

While in Bruges, it’s especially important to purchase chocolate from a shop within the Guild of the Bruges Chocolatiers. You can find their emblem displayed proudly on the facade of each store. I recommend Pralinique or the Chocolate Line.

If you’re especially passionate about chocolate, book one of the popular Chocolate tours in Bruges. Alternatively, you can visit Choco Story—a unique museum dedicated to the history of chocolate. Choco Story also offers daily praline making workshops from 10 a.m. to 3 p.m. It’s one thing to eat pralines, and entirely more exciting to make them yourself!

The Belfry Tower is an iconic landmark, and it’s one of the important buildings that compose the Bruges UNESCO World heritage site. This is, without a doubt, one of the most popular tourist attractions in Bruges. It faces the bustling Market Square and provides unparalleled panoramic views of the city.

In order to reach the top, you’ll climb a grueling 366 steps! Unfortunately, there is wire mesh all around the lookout deck. However, you can still stick your cell phone camera lens or small travel camera lens through one of the openings for an unobstructed landscape shot.

Get here early! It opens at 10 a.m. on most days. I recommend you arrive at 9:45 a.m. to avoid long queues. We came too late and spent over an hour in line!

One of Michelangelo’s most controversial sculptures isn’t in Italy. In fact, the Madonna and Child sculpture was the only work by Michelangelo that left Italy during his lifetime. It was controversial because it portrays babysitting loosely on his mother’s lap, almost as if he were sliding off. Instead of smiling down at him warmly, the Virgin Mary looks stoic and uninterested. You might imagine the catholic church;s outrage at such a depiction.

Anyways, this awesome sculpture is on display as an altarpiece at the Church of Our Lady of Bruges. The church is free to visit. It’s also remarkable for having the second tallest brick tower in the world. Don’t miss it!

See how nobility lived during the Middle Ages

The Gruit Museum is one of my favorite hidden gems in Bruges. It was the 13th century home of an extremely rich family. The story goes that this family was somehow able to obtain a monopoly on gruit taxes (gruit is a popular ingredient in beer making, used to give beer flavor). Part of the exterior facade is original, but some has been reconstructed.

The Gruit Museum is set up to demonstrate how a wealthy family would have lived during the Middle Ages. Complete with time appropriate furniture, lace bobbins, and silver utensils. You can also appreciate tapestries, musical instruments, and ceramics. It’s a charming museum that you shouldn’t miss!

Cruise through the canals

Taking a canal cruise through Bruges is a bucket-list must! There are 5 different docks where you can join. No need to book in advance. One company does this tour because the canals in Bruges are so tiny! At most, you may have to wait 15 minutes to secure your spot.

The canal cruise lasts 30 minutes, and it’s the same no matter where you embark. Along the way, your guide will point out some of the important architectural landmarks and tell stories related to the unique history of this beautiful city.

In general, beer has been important to Bruges since the Middle Ages. It was safer to drink than water, after all. The history of the Half Moon Brewery goes back almost 500 years! Today, it’s still a family-owned and operated company with strong roots in Bruges.

See how diamonds are polished

The Diamond Museum in Bruges offers daily diamond shows at 12:15 p.m, and weekends also at 3:15 p.m. It’s a unique opportunity to learn more about diamond refinery, especially appropriate in a city whose history is deeply rooted in the diamond trade. The Bruges Diamond Museum is one of the leading educational establishments on diamonds in the world.

In the early 15th century, Bruges was one of the main importers of rough diamonds from Venice. It’s said that Antwerp could not have become the diamond capital of the world if it were not for the influence of Bruges! In fact, diamonds were traded in Bruges long before they were traded in Antwerp or Amsterdam.

Ahh, the Belgian fry. The perfect golden snack with a crisp outside and buttery soft inside. Smothered in ketchup or mayo. When in Bruges, you must eat Belgian fries! The best place to pick up this savory treat is right in the center of Market Square: even locals will attest to this.

While in Market Square, take the time to enjoy the beautiful architecture. Notice the colorful facades, step-gabled roofs and iron detailing. Market Square is one of the most instagrammable places in Bruges! It’s also where you’ll find the Belfry Tower, the Historium Museum, and the Beer Museum.

If you’re interested in learning more about Belgian fries, make sure to check out the Fries Museum just down the street. Unlike many other museums in Bruges, this one is open on Mondays!

Visit one of the oldest surviving hospitals in Europe

No visit to Bruges is complete without a visit to Old St. John’s Hospital. This Medieval hospital was founded in the 12th century, and didn’t close its doors until the late 20th century! It was a refuge for pilgrims, travelers, the sick, and the poor. Today, you can walk through the old dormitories, wards, and pharmacy.

At St. John’s Hospital Museum, you can check out archives and medical instruments from the Middle Ages. There’s also a treasure trove of paintings to discover. It’s a small museum, so it won’t take all day. It’s right next to the Church of Our Lady of Bruges, so you can stop here after you visit Michelangelo’s sculpture.

The most famous paintings in Bruges are found at the Groeninge Museum. This place is best known for its collection of Flemish Expressionist paintings, especially works by Jan van Eyck. Jan van Eyck is so beloved in Bruges, that he has a statue and a whole square dedicated to him! It’s quite a lovely square, so be sure to check it out if you have time.

Anyways, the Groeninge Museum also has many lovely 18th and 19th century works of art, including some neoclassical works. Note that the museum is closed on Mondays. Plan on spending two hours here.

Kiss on the Lover’s Bridge

If you happen to be in Bruges with your significant other, then you must kiss on the Lover’s Bridge as this will ensure that your love is eternal, or so I’ve heard. You’ll find the Lover’s Bridge in Minnewater Park, on the Lake of Love.

This is one of the most romantic places in Bruges!

The most beautiful and most beloved residents of Bruges are constantly making their way around the canals!

The folklore surrounding the swans tells that in the 13th century, a damsel was locked up in her home because she refused to marry the man chosen for her. In the cellar where she was hidden away, two swans visited her every day. After she was freed, she apparently left the city of Bruges a hefty sum to continue to take care of the swans in her absence.

There’s another legend that claims Emperor Maximilian of Austria released these creatures into the canals in jest and mockery, as he was very unhappy with the townspeople of Bruges. Whatever their reason for being, the city of Bruges now takes tremendous care of them by feeding them, monitoring them, and ensuring they have refuge during colder months.

When looking for fresh waffles from vendors, be sure to scope out the merchandise. Does the cashier pull the waffle out from beneath the counter, or do they get it fresh from behind the press? Skip the soggy waffles that have been sitting all day. One of the most instagrammable waffle shops in Bruges is Go.fre Brugge. They make the famous “waffles on a stick.” Get them with speculoos (cookie butter) and vanilla ice cream!

Gawk at the Gothic Hall inside the City Hall Building

The City Hall Building is one of the most popular tourist attractions in Bruges. It’s one of the oldest and most elaborate city hall buildings among the low countries. It was built to embody the wealth and prestige of the Golden Age in Bruges.

The style of the Town Hall is Gothic Monumental. Visit the inside if you can: It’s adorned with 19th century murals and a polychrome vault. The Gothic Hall is the most dramatic and awe-inspiring room.

Women have been tirelessly making bobbin lace in Bruges for centuries. At one point in the history of Bruges, one in every four women was a lacemaker. Lacemaking was an honorable way for women of any background and socioeconomic status to make money for her family.

Today, you can visit the Lace Center in Bruges. It’s a museum inside the old school for lace making. You can also visit one of many lace shops and buy authentic, handcrafted lace. This makes an excellent gift for mom or grandma!

Bruges is a quick hour train ride from Brussels, or two hours from Amsterdam. It’s extremely walkable! You won’t need to use cabs, Uber or public transportation. You may want to take a horse and carriage ride, but only for the fun of it! There isn’t anything you’ll want to see that you can’t get to in 20 minutes of walking. The train station is even a 20-minute walk from the historic city center.

There is also a free shuttle that runs every 30 minutes from the train station to Market Square.

This Tourist Map of Bruges includes all of the top attractions, recommended restaurants and chocolate shops.

Where to Stay in Bruges

Valentina is the woman behind Valentina’s Destinations. It was born from her obsession with meticulously researching, organizing and planning travel itineraries. She is originally from Serbia but grew up in Chicago. She loves hunting down local restaurants, unique experiences, and hidden gems. You can follow her on Pinterest and Facebook.